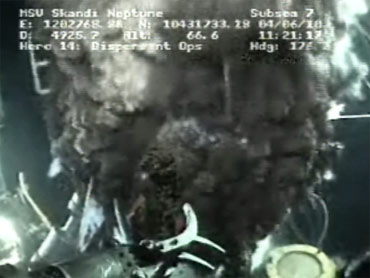 Waves of gooey tar balls crashed into the white sands of the Florida Panhandle on Friday as BP engineers adjusted a sophisticated cap over the Gulf oil gusher, trying to collect the crude now fouling four states.

Even though the inverted funnel-like device was set over the leak late Thursday, crude continued to spew into the sea in the nation's worst oil spill.

Special Section: Disaster in the Gulf
Obama Back in La. for Fresh Look at the Gulf

BP will continue using toxic dispersants to break up the oil on the surface and right at the wellhead, CBS News Correspondent Mark Strassmann reports from Grand Isle, La., The company has used almost two million gallons of dispersants so far. A panel of federal experts Friday recommended its continued use despite harm it causes to underwater sea life.

The sustained oil leakage, according to BP officials, was expected as engineers hope to close several open vents on the cap throughout the day in the latest attempt to contain the oil.

"We do have the cap successfully in place. … And the oil you see escaping right now is actually part of the design," BP's chief operating officer Doug Suttles told CBS "The Early Show" Friday. "What we have is four vent valves on the top of this cap. We'll be successfully closing those vent valves through the course of the day."'

BP also announced plans to provide a daily morning update on how much crude is being collected by their oil drillship Enterprise.

"Things are going as planned," said BP senior vice president Kent Wells. "We now have 12 hours of experience with this. It's never done at 5,000 feet before, but I am quite encouraged."

It's the latest bid to contain - not plug - the nation's worst spill. Even if the cap is successful, it will not collect all the oil coming out. Stopping the leak is still months away.

But officials were optimistic when the inverted funnel-like system, wrapped in hoses and more sophisticated than previous devices, started pumping oil and gas to a tanker on the surface.

Coast Guard Adm. Thad Allen, the government's point man for the disaster, said a very rough estimate of current collection would be about 42,000 gallons a day -- less than one-tenth of the amount leaking from the well -- and stressed that the number was an estimate. Later, BP said in a tweet that, since it was installed Thursday night, it had collected about 76,000 gallons.

"Progress is being made, but we need to caution against over-optimism," he said.

Suttles said the goal is to capture more than 90 percent of the flow, which has spewed between 21 million and 46 million gallons of oil since a rig exploded on April 20 about 50 miles from the Louisiana coast, killing 11 workers. BP was leasing the rig and is responsible to fix and clean up the spill.

As they worked on the system underwater, the effect of the BP spill was widely seen. Swimmers at Pensacola Beach rushed out the water after wading into the mess. Brown pelicans coated in chocolate syrup-like oil flailed and struggled in the surf on a Louisiana island. The oil on the beaches of East Grand Terre near Grand Isle, La., were stained in hues of rust and crimson, much like the color of drying blood.

"In Revelations, it says the water will turn to blood. That's what it looks like out here - like the Gulf is bleeding," said P.J. Hahn, director of coastal zone management for Plaquemines Parish as he kneeled down to take a picture of an oil-coated feather. "This is going to choke the life out of everything."

President Obama visited the Louisiana coast Friday, his second trip in a week and the third since the disaster unfolded following an April 20 oil rig explosion. Eleven workers were killed.

On Thursday, he told CNN's Larry King that he was "furious" over the disaster.

Overall, 44 percent disapprove with the Obama administrations handling of the crisis, with 38 percent satisfied. Sixty-eight percent disapproved of BP's response, compared with just 21 percent who felt it was adequate. Those findings are similar to a CBS News poll conducted last week. 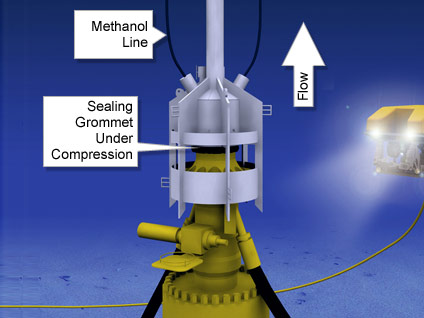 (BP)
On Thursday, the U.S. sent BP a $69 million bill, which accounts for three-quarters of the company's obligations to the government to date, reports CBS Radio News White House correspondent Peter Maer.

A mile below the water's surface, the cap has different colored hoses loosely attached to it to help combat the near-freezing temperatures and icylike crystals that could clog it. The device started pumping oil and gas to a tanker on the surface overnight, but it wasn't clear how much.

To put the cap in place, BP had to slice off the main pipe with giant shears after a diamond-edged saw became stuck. By doing so, they risked increasing the flow by as much as 20 percent, though Allen said it was still too soon to know whether that had happened.

"Once the containment cap is on and it's working, we hope the rate is significantly reduced," he said.

The jagged cut forced crews to use a looser fitting cap, but Allen did not rule out trying to again smooth out the cut with the diamond saw if officials aren't satisfied with the current cap.

The best chance to plug the leak is a pair of relief wells, which are at least two months away. The well has spit out between 22 million and 47 million gallons of oil, according to government estimates.

In Florida, spotters who had been seeing a few tar balls in recent days found a substantially larger number before dawn on the beaches of the Gulf Islands National Seashore and nearby areas, a county emergency official said. The park is a long string of connected barrier islands near Pensacola.

David Lucas, of Jonesville, La., and a group of friends abruptly ended their visit to Pensacola Beach after wading into oily water.

"It was sticky brown globs out there," Lucas said after the group cleaned their feet in the parking lot and headed south to Orlando.

Just to the west at Gulf Shores, Ala., Wendi Butler watched glistening clumps of oil roll onto the white sand beach during a morning stroll. An oily smell was in the air.

(AP/CBS/NOAA)
Butler moved to Perdido Bay from Mobile days before the spill. Now, her two kids don't want to visit because of the oil and she can't find a job.

"Restaurants are cutting back to their winter staffs because of it. They're not hiring," she said.

"We will meet our obligations both as a responsible company and also as a necessary step to rebuilding trust in BP as a long term member of the business communities in the U.S. and around the world," said BP Chairman Carl-Henric Svanberg. "This is in the interest of all our stakeholders."

In oil-soaked Grand Isle, BP representative Jason French might as well have painted a bulls-eye on his back. His mission was to be BP's representative at a meeting for 50 or so residents who had gathered at a church to vent.

"We are all angry and frustrated," he said. "Feel free tonight to let me see that anger. Direct it at me, direct it at BP, but I want to assure you, the folks in this community, that we are working hard to remedy the situation."

"Through the negligence of BP we now find ourselves trying to roller-skate up a mountain," she said. "We're growing really weary. We're tired. We're sick and tired of being sick and tired. Someone's got to help us get to the top of that mountain."

Newly disclosed internal Coast Guard documents from the day after the explosion aboard the Deepwater Horizon rig indicated that U.S. officials were warning of a leak of 336,000 gallons per day of crude from the well in the event of a complete blowout.

The volume turned out to be much closer to that figure than the 42,000 gallons per day that BP first estimated. Weeks later it was revised to 210,000 gallons. Now, an estimated 500,000 to 1 million gallons of crude is believed to be leaking daily.

The Center for Public Integrity, which initially reported the Coast Guard logs, said it obtained them from Rep. Darrell Issa, R-Calif., ranking Republican on the House Oversight and Government Reform Committee.

The logs also showed early in the disaster that remote underwater robots were unable to activate the rig's blowout preventer, which was supposed to shut off the flow from the well in the event of such a catastrophic failure.