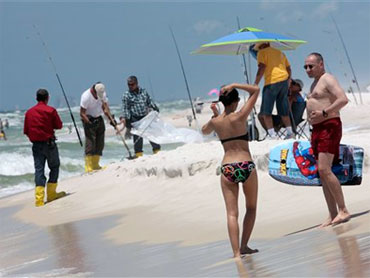 Gooey tar blobs are washing ashore on the white sands of the Florida Panhandle and nearby Alabama beaches Friday, as a slick from the BP spill drifts closer.

Escambia County officials in Pensacola told CBS News that tar balls are now washing up on shore in the area.

Floridians Brace for "Inevitable" Arrival of Oil
Special Section: Disaster in the Gulf

The U.S. Unified Command, based in Mobile, Ala., is sending out cleanup crews to collect samples for testing. The teams began collecting tar balls on Santa Rosa beach and are making their way to Pensacola Beach.

Spotters who had been seeing a few tar balls in recent days found a substantially larger number starting before dawn on the beaches of the Gulf Islands National Seashore and nearby areas, a county emergency official said. The park is a long string of connected barrier islands near Pensacola.

Keith Wilkins from Escambia County emergency management said tar patties were pretty thick on parts of the beach, as much as one every foot.

David Lucas, of Jonesville, La., and a group of friends abruptly ended their visit to Pensacola Beach after wading into oily water.

"It was sticky brown globs out there,'' Lucas said after the group cleaned their feet in the parking lot and headed south to Orlando.

People should stay away from oil on the beach or in the water, but swallowing a little oil-tainted water or getting slimed by a tarball is not considered grounds for a trip to the emergency room, health officials said.

Oil is considered toxic. Short exposures may cause only fleeting symptoms, and exposure to large amounts of it for a long time could lead to problems with breathing, thinking and coordination, and potentially raise the risk of cancer, said Niladri Basu, a University of Michigan environmental toxicologist.

Small gobs of reddish brown oil washed up in the surf for the first time in nearby Gulf Shores, Ala., on Friday morning and a petroleum smell tinged the air.

Meanwhile, brown pelicans coated in chocolate syrup-like oil flailed and struggled in the surf on a Louisiana island, where the beached was stained in hues of rust and crimson, much like the color of drying blood.

"In Revelations, it says the water will turn to blood. That's what it looks like out here like the Gulf is bleeding," said P.J. Hahn, director of coastal zone management for Plaquemines Parish as he kneeled down to take a picture of an oil-coated feather. "This is going to choke the life out of everything."

Officials have said it is inevitable oil will eventually wash up on Panhandle beaches after a slick from the Deepwater Horizon spill was spotted about 9 miles offshore this week. The edge of the spill had moved to four miles off the coast Thursday, Gov. Charlie Crist said after a flyover.

Crist said the news of Friday's growth in tar balls was "very disturbing."

"Obviously, it's not the kind of news that we want to hear," Crist said on CNN's "American Morning."

Escambia County emergency officials has been preparing for the oil by shoring up miles of boom. The county plans to block oil from reaching inland waterways, but left its beaches unprotected because they are too difficult to shield and easier to clean up.

In Gulf Shores, Ala., the goo was isolated to a few areas, but an oil smell permeated the breeze.

"I really smelled it down there," said Jennifer Powell, combing the beach for shells with her husband. "It was like it was burning my nose a little bit."

The Powells, from Russellville, Ky., had planned to return to the beach later this summer, but now they're not sure they want to come back.

"You won't be able to get in the water, and it's going to get all over you and all," she said. "I don't think I want my kids in that."

Cleanup crews were nowhere to be seen at the public beach.

Wendi Butler, 40, who lives on Perdido Bay, was walking on a public beach at Gulf Shores and saw clumps of oil tar that she described as looking like burnt caramel. She said it smelled like the jet fuel exhaust of a landing strip.

"I know, my ex-husband was in the Air Force. He would come home from work every day smelling like this. You don't smell the beach breeze at all."

More Coverage of the Disaster in the Gulf:

Gallery:
Wildlife in the Gulf

To view the National Center for Atmospheric Research's computer model on the spread of oil, illustrating a likely dispersal pathway for roughly four months following the spill (assuming oil spilling continuously through June 20), click on the video player below.