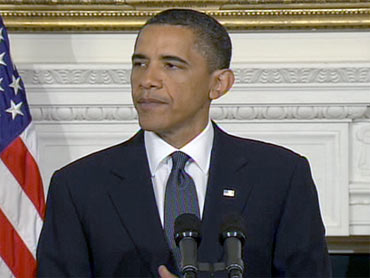 BP has agreed to finance a $20 billion fund to pay the claims of people whose jobs and way of life have been damaged by the devastating oil spill in the Gulf of Mexico, President Obama announced Wednesday.

The independent fund will be led by lawyer Kenneth Feinberg, who oversaw payments to families of victims of the Sept. 11, 2001 terrorist attacks. Obama announced the deal after wrapping up a meeting with BP executives at the White House.

"This $20 billion amount will provide substantial assurance that the claims people and businesses have will be honored," said the president. "It's also important to emphasize that this is not a cap. The people of the Gulf have my commitment that BP will meet its obligations to them."

BP Chairman Carl-Henric Svanberg, who has until now remained elusive, told reporters after the White House meeting that he wanted to "apologize to the American people on behalf of all the employees of BP, many of whom are living on the Gulf Coast, and I do thank you for the patience that you have during the difficult time."

Svanberg said his company would not pay dividends this year. Over the long term, he said, he hopes "that we will regain the trust you have in us."

"We made it clear to the president that words are not enough," he said. "We understand that we will and we should be judged by our actions."

BP Chairman: "We Care About the Small People"

Who is BP Chairman Carl-Henric Svanberg?

In addition to making the painful decisions on payments to survivors and families of victims of the September 11th terror attacks, Feinberg coordinated distribution of funds to victims of the 2007 Virginia Tech shootings. He has also served as the Obama administration's "pay czar," determining salary limits for executives at companies that tapped into the government bailout fund.

A White House official said Feinberg was the consensus choice of both BP and the administration, reports CBS News White House correspondent Peter Maer. The official said it was natural for BP to have a say because "it's their money."

Carol Browner, assistant to the president for energy and climate change, said the decision to set up the fund was "White House driven" and would not have been made by BP alone.

Today's agreement is far from the final chapter in the financial side of the oil spill response, Maer reports. Legal experts who have been involved in similar victim compensation cases say the open-ended nature of the BP spill makes it difficult to estimate the ultimate economic and environmental damages. One veteran class action attorney cautioned against accepting any early damage assessment.

CBS News chief White House correspondent Chip Reid notes that the
number of people affected by the Gulf spill could be in the tens or even hundreds of thousands -- each with different circumstances. And they'll be allowed to file for damages again and again, as their circumstances worsen. Add to that the fact that the $20 billion is not a cap -- if more money is needed the government has reserved the right to demand more. That means the gulf fund could be in existence for many years.

The president said in his remarks that he "heard growing frustration" about the claims process and BP's willingness to pay in his four trips to the Gulf region.

"BP has publicly pledged to make good on the claims it owes to people in the Gulf," he said. "And so, the agreement we reached will set up the financial and legal framework in which to do it."

The president did not put forth a timeline for claims to be paid, but the White House said BP would pay $5 billion per year over four years into the escrow account.

"I'm absolutely confident BP will be able to meet its obligations to the Gulf Coast and to the American people," he said. "BP is a strong and viable company and it is in all our interests that it remains so. So what this is about is accountability. At the end of the day, that's what every American wants and expects."

Departing from his prepared remarks, the president said he stressed to Svanberg that many of the people in the Gulf "don't have a cushion" to get through the disaster.

He said it came at the worst possible time for those in the region, who typically make their money during the summer season.

Obama said he asked the chairman during a one-on-one meeting to "keep in mind those individuals. That they are desperate. That some of them, if they don't get relief quickly, may lose businesses that have been in their families for generations."

Svanberg said that he got that message and that his company cares about "the small people" affected by the disaster.

The White House said Obama spent about 45 minutes with BP officials, who were in meetings at the White House for about four hours overall.

The meeting with BP executives took place a day after Obama's first, some say disappointing Oval Office address to the nation Tuesday night when he laid out what his administration has done and will do to overcome the country's worst environmental crisis.

Responding to critics who said Obama was too moderate in the Oval Office speech, a forum saved by president's for national crises, senior adviser David Axelrod said Wednesday that Americans "were not asking him to get angry. They were asking him to get results."

BP announced it had begun early Wednesday burning oil siphoned from the ruptured well as part of its plans to more than triple the amount of crude it can stop from reaching the sea.

A rig BP was leasing exploded and sank in late April, killing 11 workers. Millions of gallons of oil have spewed into the Gulf since then, creating the worst environmental disaster in U.S. history, and the showdown at the White House on Wednesday was Mr. Obama's first direct encounter with BP executives since the disaster started.

As of Tuesday, the maximum amount of oil that has gushed out of the well since the April 20 explosion is 116 million gallons, according to the estimates by scientists advising the federal government.

An Associated Press-GfK poll released Tuesday showed 52 percent now disapprove of Mr. Obama's handling of the oil spill, up significantly from last month. Most people - 56 percent - think the government's actions in response to the disaster really haven't had any impact on the situation.