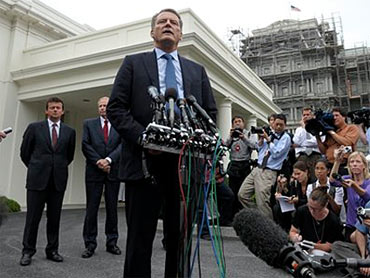 After meeting with President Obama and White House officials today, BP Chairman Carl-Henric Svanberg apologized to the American people and insisted that his company cares about "the small people" along the Gulf Coast impacted by the devastating oil spill his company is responsible for.

"I would like to take this opportunity to apologize to the American people on behalf of all employees of BP, many of whom are living on the Gulf Coast, and I thank you for your patience," Svanberg said.

He said that he sometimes hears that oil companies are greedy or don't care about people, but that's not true.

"We care about the small people," Svanberg said.

He added that his meeting with Mr. Obama was very constructive and that BP appreciates the president's deep concern.

Since the April 20 explosion on the Deepwater Horizon oil rig, operated by BP, millions of gallons of oil have poured into the Gulf of Mexico, creating the largest oil spill in U.S. history.

Svanberg called it a "tragic accident that never should have happened."

The chairman announced that the BP board decided today that it will not pay any further dividends this year. He also confirmed, as Mr. Obama said earlier in the day, that BP is creating a $20 billion fund run by an independent party to pay claims. The fund will ensure "all proper claims are handled swiftly and fairly," Svanberg said.

"We made it clear to the president that words are not enough. We understand that we will and we should be judged by our actions," Svanberg said. "This administration and our company are fully aligned in our interests of closing this well, cleaning the beaches and caring for those that are affected."

The chairman also said BP is conducting its own investigation into the cause of the explosion, but he had no comment on whether the rig was operating below safety standards.