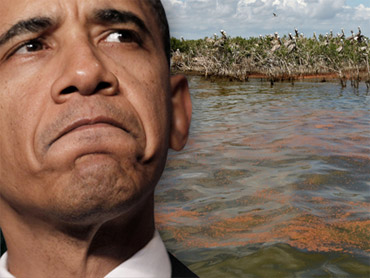 Americans are just as down on President Barack Obama for his response to the Gulf oil spill as they were on President George W. Bush for his handling of the devastation unleashed by Hurricane Katrina, according to a new Associated Press-GfK poll released Tuesday.

And, now, like in 2005, most Americans are angry about the government's slow response, with 54 percent saying they had strong feelings about the bureaucracy's reaction. Many doubt that Washington could really help them if they were a disaster victim.

Almost two months after the April 20 rig explosion that killed 11 workers and sent plumes of crude into the Gulf, Obama and his administration have struggled to contain the leak and the environmental disaster. So has BP which leased the rig.

The survey found that 52 percent don't approve of Obama's handling of the spill, a significant increase from last month when a big chunk of Americans withheld judgment. A stunning 83 percent disapprove of BP's performance in the aftermath of the explosion that triggered the spill of millions of gallons of crude. That number of Americans disapproving also was a big jump from May.

Back then, people seemed to take a more wait-and-see approach.

The survey comes as the president seeks to show more forceful leadership on the disaster and convince a skeptical public he's up to the task.

Obama's overall job performance rating didn't take a hit; it stayed virtually the same at 50 percent. That's consistent with the public's attitudes throughout his young presidency; people generally like him but don't necessarily agree with his policies.

But people also don't have the type of emotional response to the oil disaster as they did to the hurricane; 32 percent say they feel strongly shameful about what has occurred since the rig explosion. That's compared to 40 percent who felt that way after the debilitating hurricane that killed at least 1,800 and left countless others homeless, many of whom were poor and black.

In profound ways, Katrina changed America's faith in government. It deepened the public's distrust of Washington, exposed inequalities and cemented the notion in Americans' minds that the Bush administration was inept; the president's standing never recovered. Obama is trying to prevent his presidency from being defined the same way.

Public attitudes have shifted dramatically as Americans already reeling over a recession and angry at institutions of all types - from corporations to Congress - watched oil continue to gush while both BP and the government struggled to find a solution and clean up the mess.

Far more people are focused on the spill now as oil coats beaches, kills wildlife and cripples the Gulf economy; 87 percent now say the issue is extraordinarily important to them personally, second only to the economy. And far more rate the environment - 72 percent - as very important than did last month.

All that underscores the public's widespread lack of faith in government as well as the task ahead for Obama as he tries to show he's in command of the response. The president was wrapping up a two-day visit to the region and planned an Oval Office prime-time speech on the catastrophe later Tuesday. Obama was meeting BP executives at the White House on Wednesday.

His response is all but certain to be a political issue, defining his presidency and, perhaps, affecting this fall's midterm congressional elections if not his likely re-election race in two years.

Nearly three quarters in the poll said they thought the spill will have some impact on their own families in the next year; 63 percent said the country would still be feeling the impact in five years while 40 percent said it would be more like a decade.

The AP-GfK Poll was conducted June 9-14 by GfK Roper Public Affairs & Corporate Communications. It involved interviews on landline and cell phones with 1,044 adults nationwide, and has a margin of sampling error of plus or minus 4.3 percentage points.