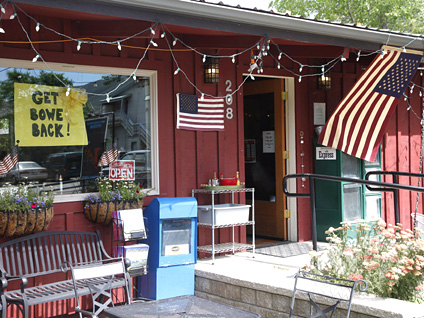 An annual event called "Bring Bowe Back" scheduled for June 28 was quickly renamed "Bowe is Back."

"It is going to be Bowe's official welcome-home party even if he's not quite home yet," organizer Stefanie O'Neill said Saturday.

Bergdahl, 28, had been held prisoner by the Taliban since June 30, 2009. He was handed over to U.S. special forces by the Taliban in exchange for the release of five Afghan detainees held by the United States.

In Hailey, a town of 7,000 residents just down the road from upscale Sun Valley, residents have hung yellow ribbons along the one major road that travels through the heart of the community. Signs were taped up Saturday that said, "Bowe is free at last!"

Hailey resident Audrey Kirk said she found out about Bergdahl's release after her sister texted her the news.

"I remember when he was captured. It was awful," said Kirk, who attends the same church as Bergdahl's parents. "When I got the text, I just started screaming and went to turn on the TV. It's surreal that he's coming home."

Rebecca DeShields, also a Hailey resident, said that when she heard about the news she grabbed her bike and attached a bright yellow balloon to the front. "This is a story of redemption, this is a story of one of our own coming home," she said.

DeShields was standing outside Zaney's River Street Cafe, where Bergdahl used to work as a barista. The coffee shop became the town's center for friends and acquaintances to show support for Bergdahl.

For years, a sign that hung in the window read "Get Bowe Back." On Saturday, it was accompanied with two more signs that said, "Welcome home, Bowe!" and "Our prayers have been answered!"

Jeff Gunter, Hailey's police chief, described the day as being "extremely emotional." Gunter has been close friends with Bergdahl's family for the past 25 years.

"Nobody can know what they (the parents) went through," Gunter said. "But now that they're able to reach out and touch him, to hold him, that's amazing."

Bob and Jani Bergdahl live in a modest home off a dirt road about 5 miles outside of Hailey. They joined President Obama during an appearance in the Rose Garden Saturday evening as he announced Bowe Bergdahl's release. Bob and Jani Bergdahl planned to speak to the media in Boise on Sunday afternoon.

Bob Bergdahl learned some Pashto, the language spoken by the Taliban, and made a video, distributed via the Internet in May 2011, in a bid to appeal directly to the Taliban for his son's freedom. He also grew a beard as a personal monument to his son's plight.

Gov. C.L. "Butch" Otter issued a statement welcoming the news and expressing gratitude for prayers for Bergdahl's release being answered.

"Today, Idaho gives thanks," Otter said. "Soon we all will celebrate Bowe's freedom and homecoming."