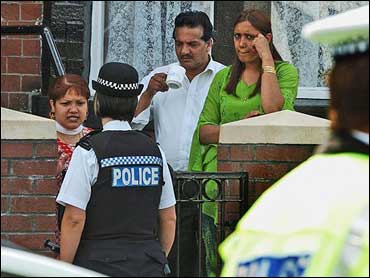 Twice a week, 22-year-old Shahzad Tanweer would join friends in soccer games and practice his beloved cricket — a sport that links England and Pakistan, the two countries that shaped him.

Hasib Hussain, 19, was known in this northern English city as a charmer who liked to flirt and wear his hair long so that, as one friend remembered, it "fell like a curtain" atop his lanky frame.

The eldest of the three, 30-year-old Mohammed Sidique Khan, worked as a counselor in a youth center and seemed to spend more time in the gym than in mosques.

These images and memories of bright young men have been crushed by a grim portrait given by police — a portrait that paints them as British-born men of Pakistani origin united by radical Islam and by having carried out the July 7 suicide bombings that killed at least 52 and injured 700 in London.

Police have not publicly confirmed the identities of any suspects, but British media have named the three. Their lives and what apparently drove them to violence is the only topic of discussion in Leeds.

The news has hit Leeds hard, CBS News Correspondent Sheila MacVicar reports. People in town say they are worried that they will now live with suspicion and fear.

"He was normal. We used to drink Coke and Fanta together. He was in my team," said a friend of Tanweer's, who gave his name only as Saj, in the working-class city of Leeds, about 300 kilometers (185 miles) north of London in the county of Yorkshire.

"He was quiet. He was religious. He went to every mosque here. There are loads of mosques here," Saj said. Tanweer also would show up twice a week for soccer games, Saj said.

Tanweer lived all his life in the Beeston area of Leeds — an industrial city made up of a variety of ethnic groups from Irish to Jewish, Indian to West Indian. In some neighborhoods, storefronts and even a Church of England community center have posted signs in English, Arabic and Urdu.

Tanweer's father, Mohammed Mumtaz Tanweer, was born in Pakistan and owns a fish-and-chip shop, serving that most English of meals. His son studied sports science at Leeds Metropolitan University and planned to work in sport.

His uncle, 65-year-old Bashir Ahmed, said the family had been "left shattered," the Press Association news agency reported. "It wasn't him. It must have been forces behind him."

It was unclear what might have driven the three men to the radical side, as it was unclear how much contact they had with Muslim extremist groups or cells outside Britain. Ahmed said his nephew had gone to Pakistan earlier this year to study religion, and that the family believed he was attending "some religious function" on the day of the bombings.

Tanweer was staying in Lahore, Pakistan, and the investigation is now focusing on if he was recruited by terrorists there,

"It was total shock, I mean, it's unbelievable," Ahmed told reporters, but he denied that his nephew had gone to Afghanistan and taken part in training camps.

"There is no way, I have seen his passport," he said.

Another friend, Azzy Mohammed, 21, said: "He's the kind of person who gets along with anyone. His sense of humor is very good. He's a sweet lad."

Hussain told his parents he was going to London with friends, MacVicar reports. Instead, he blew himself up on the #30 bus.

One of his friends could not believe what Hussein had done.

Hussain — accused of carrying out the suicide attack that claimed 13 lives on the double-decker bus — was known for his sense of humor and style. He wore blue contact lenses and long hair parted in the middle. "It fell like a curtain on his head," said a friend, who identified himself only as G.

A neighbor who asked not to be named said: "He lived here all his life. They were very, very nice people. We all knew them, but I wouldn't say I knew them well. They were just a very nice family."

Khan worked as a youth counselor, and some neighbors said he often aided disabled children. He had an 8-month-old daughter.

A neighbor, Sara Aziz, 28, said she often saw him going the gym in the mornings. Others neighbors said they rarely saw him in the local mosque, and that he never talked with them about religion.

Racial tensions erupted in Leeds in the 1990s, with riots between whites and South Asians, blacks and Caribbean immigrants. But over the years this waning industrial hub has managed to revive itself as an integrated, multiethnic center for shoppers, museum-goers and fiercely devoted football fans.

"Leeds has reinvented itself fabulously in the last 25 years, moving away from textiles and heavy industry," said Roger Boyle, a computer professor at Leeds University and amateur historian.

There is word that one of the bombers had come to the attention of British intelligence last year, MacVicar reports, but he was never put under surveillance. That's now seen as an opportunity clearly missed.

On Wednesday, Scotland Yard said anti-terror police made a raid on a residence northwest of London in connection with last week's bombings.

The raid took place in Aylesbury, some 40 miles northwest of London, and near the city of Oxford. Police said no arrests were made.