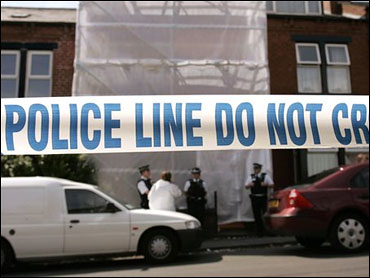 Scotland Yard said anti-terror police made a raid on a residence northwest of London in connection with last week's bombings.

The raid took place in Aylesbury, some 40 miles northwest of London, and near the city of Oxford. Police said no arrests were made, but investigators are searching the home.

The raid came as police searched for the mastermind behind the London terror attacks. Authorities combed through evidence where the blasts ripped apart three trains and a bus, and in the neighborhood where three of the four suspected suicide bombers originated.

Police removed materials from tidy single-family homes in the northern city of Leeds, a day after raiding six residences in a search for explosives and computer files that would shed more light on what were believed to be the first suicide bombings in Western Europe. They arrested a man, identified by British news agencies as a relative of one of the suspected bombers.

A British judge ruled that police could keep the man in custody for several more days, as investigators continue searching for clues. The BBC reported that a fifth suspect is being sought, although police would not comment on that.

At least three Britons of Pakistani descent are suspected of carrying out the attacks that killed at least 52 and injured 700. Surveillance camera footage not yet released shows the four men with backpacks at King's Cross station at 8:30 a.m., 20 minutes before three of the four bombs exploded almost simultaneously, reports

Police have not publicly confirmed the identities of any of the suspects.

There is word that one of the bombers had come to the attention of British intelligence last year, but he was never put under surveillance, MacVicar reports.

Michael Clarke, director of the Center for Defense Studies in Britain, told

"What we know of them is two of them at least seem to have had a sort of a personality change a couple of years ago. They became different, according to their families. But this is all very preliminary at the moment," Clarke said.

What bothers security experts the most, Clarke said, "is that these are, in the terminology, 'lilywhites.' They have no criminal record, are not known to be associated with any of the groups. One has some sort of criminal connection but not a terrorist one. Authorities are dealing with people that they can't pick up by any triggers or previous indications."

Clarke said he has no doubt the suspects are linked to a larger terror cell.

"I'm absolutely certain that these four men didn't act alone. Nobody wakes up in the morning and decides to be a suicide bomber. Suicide bombers are always part of an organization, which gives up the pressure for them to do it, which lauds them, gives them tremendous cachet for them to do it. Makes it impossible for them to back out."

In Leeds, neighbors in the garbage-strewn neighborhoods of Victorian-era red brick houses were apprehensive and hostile, walking fast past reporters huddled around outside the cordons. A general feeling of shock hangs over the community, report

CBS News Correspondent Elizabeth Palmer (video)
. One warehouse worker, who would only give his first name, Saj, said Tanweer was a "good lad" and athlete.

"He was quiet," he said. "He was religious. He went to every mosque here. There are loads of mosques here."

U.S. intelligence agencies are checking the names of the London bombers against their databases looking for any U.S. connection, President Bush told chief executives at a private White House meeting Tuesday.

Two militant Islamic groups have claimed responsibility for the bombings.

Although police stopped short of calling them suicide attacks, Peter Clarke, head of the Metropolitan Police anti-terrorist branch, said "strong forensic and other evidence" suggests one of the suspects was killed in a subway bombing and property belonging to the three others was found at the locations of the other blasts.

In an address to the House of Commons, Blair also said his government would begin consultations on new anti-terrorism legislation.

On Tuesday, acting on six warrants, British soldiers blasted their way into an unoccupied Leeds row house. Streets were cordoned off and about 500 people were evacuated. Hours earlier, police searched five homes elsewhere in the city. Police still weren't letting the evacuees return to their homes early Wednesday.

Mohammed Iqbal, a town councilor who represents the City-on-Hunslet section of Leeds, told AP that all of the homes raided belong to "British citizens of Pakistani origin."

Three of the homes were in the neighborhood he represents, Iqbal said in a phone call with AP's office in Islamabad, the Pakistani capital. He said he had just met with police about the investigation.

"This is not good for Muslims," Iqbal said. "We have businesses here. There will be a backlash."

More than 100 alleged revenge attacks have been reported since the blasts.

In Nottingham, a man of Pakistani roots was reportedly beaten to death on Sunday. In Croydon, an area south of London, a man pushed an oil-soaked rag through the letter box of a Muslim house. A mosque in Camden, outside of London, has received several bomb threats. In Hackney, another town outside of London, the homes of two Muslims were stoned.

Anti-Muslim graffiti has been scrawled on mosques and other buildings.

Several officials, including Foreign Minister Jack Straw, have said the attacks bore the "hallmark" of al Qaeda, and one of the questions investigators are presumably trying to answer is whether the four suspects had outside help in planning the attacks.

One of the four bombers attended a religious school in Pakistan, MacVicar reports.

Jeremy Shapiro, director of research at the center on the United States and Europe at the Brookings Institution, said Europeans had been involved in suicide attacks in the Middle East, but he knew of no successful suicide bombings in Western Europe previously.

Leeds, about 185 miles north of London, has a population of about 715,000. About 15 percent of the residents are Muslim, and many come from a tight-knit Pakistani community, mostly from Mirpur, south of Islamabad in Pakistani-controlled Kashmir. Other pockets of the community are mostly Arab.

Khalid Muneer, 28, a spokesman for the Hyde Park Mosque in Leeds, said the community was surprised by the raids and police claims that the bombers may have come from there.

"That connection would surprise us all, even shock the whole community. We still think it's too early to say," he said, adding that Muslims in the area were not opposed to Britain.

"I've seen no calls in this area for jihad against British or American forces. You will not get that sentiment expressed around this mosque."

Police said their investigation was moving ahead, and warned that the death toll would continue to rise. Fifty-six people remained hospitalized Tuesday.

Forensics experts have said it could take weeks to identify the bodies, many of which were blown apart and would have to be identified through dental records or DNA analysis. Investigators say 11 bodies have been identified.