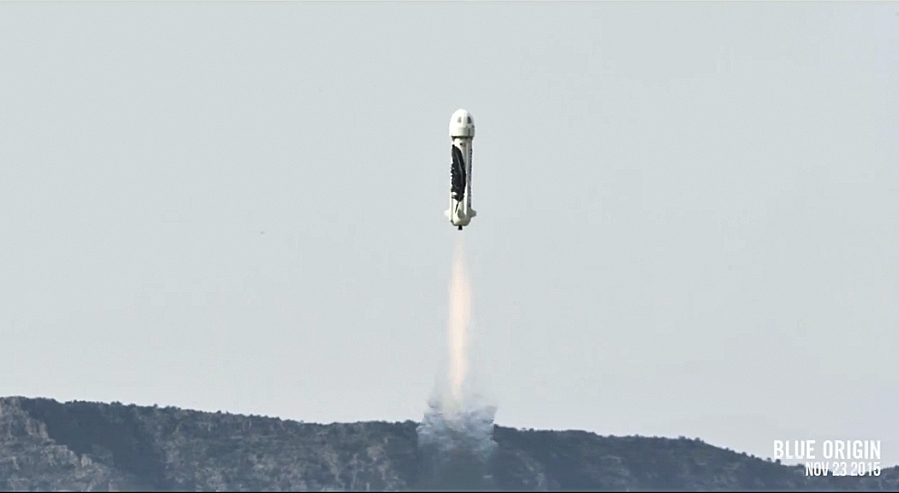 Blue Origin's innovative New Shepard spacecraft, a reusable sub-orbital rocket and capsule designed to boost passengers out of Earth's atmosphere for brief forays in space, completed a second test flight Monday, the first to include a fully successful landing of both the crew capsule and its booster, Amazon founder Jeff Bezos announced Tuesday.

"You've seen a lot of rockets take off in your time, but you've never seen one land," Bezos, who also owns Blue Origin, told Charlie Rose on "CBS This Morning." "The rocket you see behind me is completely reusable. That's a game changer, because it changes the cost structure of space travel completely."

During a media conference call later, Bezos told CBS News he's looking forward to riding into space himself once the test program is complete and Blue Origin begins flying paying customers "a couple of years from now."

"I've been wanting to do that since I was five years old," he said. "When I talk to astronauts, they tell me that being in space changes you. You see the Earth in a different way, you see yourself in a different way, they describe the experience as being very meaningful.

"So I want to see the Earth and see its thin atmosphere, I want to look out into space, I want to feel weightlessness and float around and do somersaults, all those things. But I think it's probably more the way the astronauts describe how it changes you that makes me so excited about the experience."

Launched at 12:21 p.m. EST (GMT-5) Monday from Blue Origin's West Texas launch site, the New Shepard's variable-thrust BE-3 engine, generating 110,000 pounds of push, boosted the spacecraft out of the dense lower atmosphere, reaching a velocity of 3.72 times the speed of sound.

The crew capsule then separated and soared to an altitude of 329,839 feet -- about 62 miles, the generally agreed on "boundary" of space -- before arcing over and plunging back to Earth. At the top of its ballistic trajectory, the vehicle was effectively weightlessness for several minutes.

Slamming back into the discernible atmosphere, the capsule experienced about five times the force of Earth's gravity before its stabilizing drogue parachutes deployed at an altitude of 20,045 feet, followed by release of three large braking parachutes. The spacecraft settled to a landing at 12:32 p.m., 11 minutes after liftoff.

The stubby New Shepard booster, or "propulsion module," reached a maximum altitude about 400 feet below the capsule, Bezos told reporters in a conference call. It then dropped tail first toward the landing site through 119-mph high-altitude winds, using braking fins to control its descent.

During the spacecraft's first test flight April 29, the capsule made a successful parachute descent but the booster crashed back to Earth because of a hydraulic problem. This time around, both systems worked normally. A Blue Origin video showed company employees raising champagne and celebrating at the base of the rocket after touchdown.

"We just successfully flew this vehicle and returned it to the launch site for the first time, and for the next couple of years we're going to continue with a very methodical test program," Bezos told Rose.

The flight, and Bezos' claims for it, set off a bit of an on-line debate.

Elon Musk, founder of SpaceX and chief designer of the company's more powerful Falcon 9 orbital booster, congratulated Bezos and Blue Origin for the successful New Shepard test flight. But in a series of tweets, Musk cited his company's on-going vertical-takeoff-and-landing -- VTOL -- test program and the greater technical challenges of getting a rocket back after helping boost a payload to orbit.

Musk said sub-orbital flights to the boundary of space only have to achieve speeds of about Mach 3 while boosting a satellite into high orbits requires velocities around 30 times the speed of sound.

In an amusing exchange, George Sowers, vice president of advanced concepts and technologies for United Launch Alliance, the dominant U.S. rocket company and a partner with Blue Origin, tweeted that one of the company's Atlas 5 rockets boosted the New Horizons probe to Pluto, "the equivalent of Mach 48, or 2300 energy units. Go @blueorigin!!"

NASA's space shuttle was partially reusable, only throwing away its external tank during launch. And the government-funded X-15 rocket plane, the McDonnell Douglas DC-X and Virgin Galactic's suborbital winged spacecraft all were designed to return to Earth for reuse.

But the New Shepard test flight was a major milestone for Blue Origin, the first commercially-developed rocket to take off vertically, reach space and safely return to Earth. Bezos said if additional testing goes well, including high-stress abort testing -- the capsule features a built-in propulsion system to push it away from a malfunctioning booster -- flights with paying customers could begin in two years or so.

"One of the good things about this vehicle is it can fly autonomously," Bezos said. "It's kind of a flying robot. It can fly itself up into space, bring itself back down and land so we don't have to put (a) pilot at risk during the test program. And then once we're completely confident in the vehicle, we'll start taking people up into space."

Asked how much Blue Origin might charge for sub-orbital rocket rides aboard the New Shepard spacecraft, Bezos said "we don't know yet."

"We have to wait another year or so before we're ready to set the price," he said. "For people who are interested in that, they can go to the Blue Origin website and sign up, and as soon as we have ticket information, we'll email them."

Virgin Galactic's SpaceShipTwo, a futuristic-looking winged spaceplane, is carried to an altitude of about 50,000 feet by a jet-powered mothership, then released for a rocket-powered climb out of the atmosphere. The spaceplane then glides to a landing.

"We continue to be big fans of the vertical takeoff, vertical landing architecture," Bezos said in April. "We chose VTVL because it's scalable to very large size. We're already designing New Shepard's sibling, her Very Big Brother -- an orbital launch vehicle that is many times New Shepard's size and is powered by our 550,000-pound thrust liquefied natural gas, liquid oxygen BE-4 engine."

The BE-4 has been selected by United Launch Alliance, a partnership between Boeing and Lockheed Martin, to power the company's new Vulcan rocket, the successor to the Atlas 5 and Delta 4 families of boosters.

On Sept. 15, Bezos visited Cape Canaveral to announce a $200 million program to develop a test stand for the BE-4 engine, a rocket manufacturing facility near the Kennedy Space Center and an agreement with the Air Force to launch the company's orbital rockets from complex 36.

Like the New Shepard, Blue Origin's orbital rocket is expected to feature a recoverable first stage.

SpaceX is working on recovering the first stage of its Falcon 9 rocket, using an off-shore barge as a landing platform. The company has not yet been fully successful, but Musk believes it will eventually work, clearing the way for boosters to land back at the Cape Canaveral Air Force Station for refurbishment and reuse.

Bezos said Blue Origin likely will use an off-shore barge of some sort for initial landing attempts with the company's orbital launcher. New Shepard operations will remain in West Texas.

Meyerson said earlier that a typical New Shepard sub-orbital flight will last between 10 and 15 minutes. Customers, either tourists or payload operators, will arrive at the launch site several days in advance for final training and vehicle familiarization.

"The powered flight portion lasts several minutes, and that is really what the BE-3 tested in our mission duty cycle tests, you'll experience about four minutes of weightlessness, view the Earth, and then you'll return within the crew capsule under parachutes."

Asked how long the test program might last, when the first human flights might be possible and how much a ticket might cost, Meyerson it was too soon to say.

"We obviously want to complete our test program first," he said. "So we're probably a few years away from selling tickets, at least from flying our first astronaut. We're not releasing prices at this time. But we're getting close, and we're really excited about where we are."