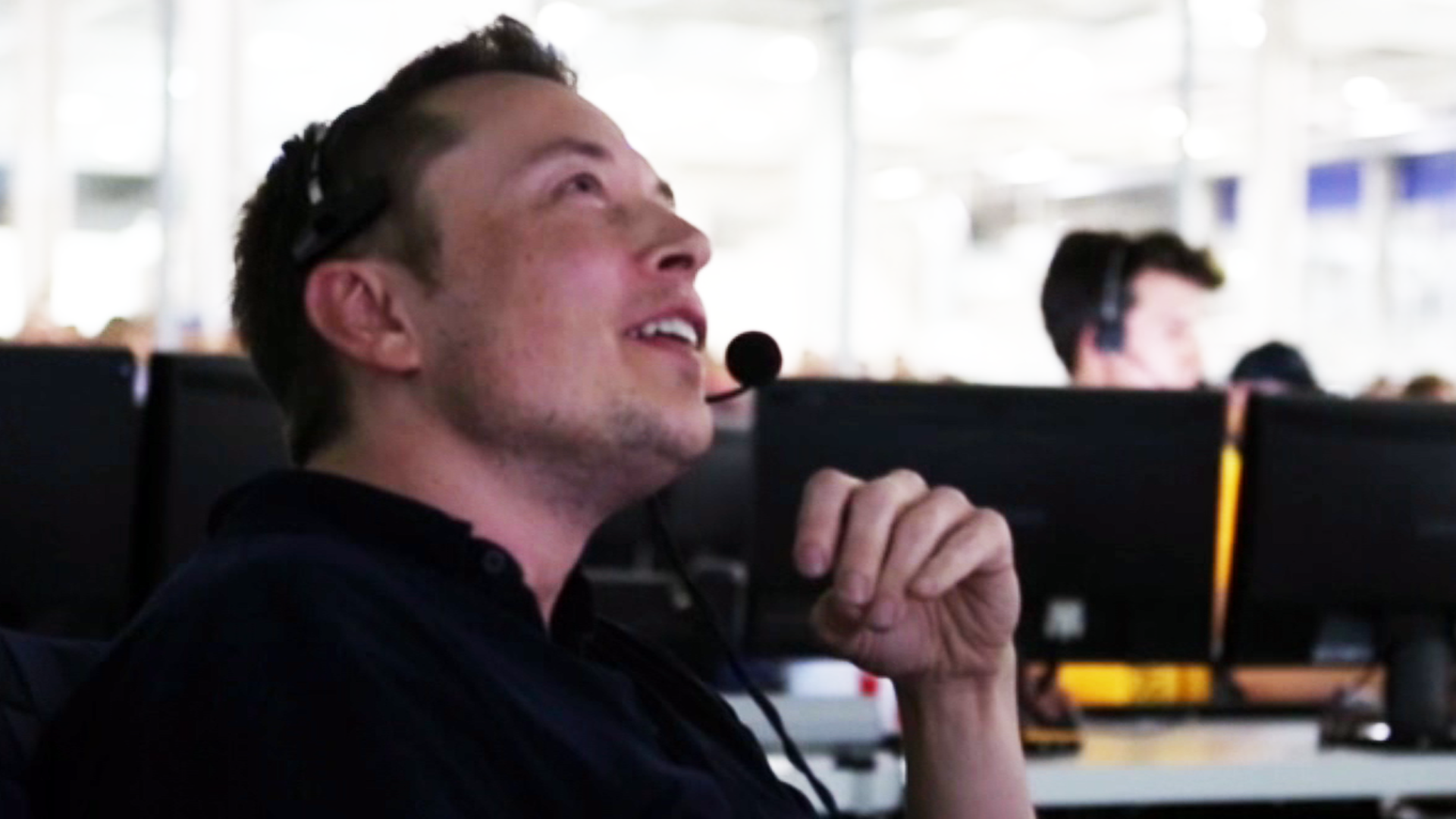 The following script is from "Fast Cars and Rocket Ships" which aired on March 30, 2014. Scott Pelley is the correspondent. Harry Radliffe, producer.

Comparing the Tesla Model S to other cars is like comparing an iPhone to a desk phone. It is a technological marvel that scorches the pavement -- zero to 60 in four seconds. Tesla is another revolutionary idea from the mind of Elon Musk -- a 42-year-old Silicon Valley entrepreneur who built an industrial empire from the stuff of little boy dreams: fast cars and rocket ships. Musk is an idealist who told us he had to start his companies so that man could colonize Mars and save the Earth. His sister says it's like her brother traveled into the future and came back to tell us all about it. So what is the future like?

Apparently it's fast and smoke-free. The Tesla Model S is powered by 7,000 battery cells linked to an electric motor. No engine, no transmission, no tailpipe. As this company video shows, the dash is dominated by a computer that's constantly connected to the Internet. It has a fanatical following. There's a waiting list that Elon Musk is trying to shorten building 600 Model S's a week in this high-tech plant in Northern California.

Scott Pelley: I have heard a lot of people describe you.

Scott Pelley: How do you describe yourself?

Elon Musk: I usually describe myself as an engineer that's basically what I've been doing since I was a kid. I'm interested in things that change the world or that affect the future and wondrous, new technology where you see it and you're like, "Wow, how did that even happen? How is that possible?"

How is it possible that Elon Musk could launch two impossible businesses -- SpaceX, a builder of rocket ships and Tesla which could be the first successful car company startup in America in 90 years.

Scott Pelley: How did you figure you were going to start a car company and be successful at it?

Elon Musk: Well, I didn't really think Tesla would be successful. I thought we would most likely fail. But I thought that we at least could address the false perception that people have that an electric car had to be ugly and slow and boring like a golf cart.

Scott Pelley: But you say you didn't expect the company to be successful? Then why try?

Elon Musk: If something's important enough you should try. Even if you -- the probable outcome is failure.

What's important to Musk is reducing greenhouse gases which he believes threaten the world. The Tesla will go about 250 miles on a charge. And Musk is building a network of charging stations where the driver pays nothing for a fill up. He hopes to make the stations largely solar powered one day.

Elon Musk: You can drive for free, forever, on pure sunlight. That's the, you know, message we're trying to convey. So even if, like, there's a zombie apocalypse and the grid breaks down, you'll still be able to charge your car.

"Well, I didn't really think Tesla would be successful. I thought we would most likely fail. But I thought that we at least could address the false perception that people have that an electric car had to be ugly and slow and boring like a golf cart."

And, if you're running from zombies, it's good to know the Model S won the highest quality rating in the history of consumer reports and has the government's highest safety rating.

Musk may be changing the car the way Steve Jobs changed the phone. Like Jobs he's a perfectionist in the art of engineering. His goal wasn't to show a profit but to reveal the possibilities. It is a desire to discover that's also behind Musk's other line of vehicles.

Only four entities have launched a space capsule into orbit and successfully brought it back: the United States, Russia, China and Elon Musk. This Buck Rogers dream started years ago when he had a nutty idea to fly an experimental greenhouse to Mars. But he couldn't. He discovered that the price of rockets was astronomical.

So now he builds his own.

Elon Musk: I had so many people try to talk me out of starting a rocket company, it was crazy.

Scott Pelley: What did they tell you?

Elon Musk: One good friend of mine collected a whole series of videos of rockets blowing up and made me watch those. He just didn't want me to lose all my money.

He never did launch that greenhouse but now Musk is lofting commercial satellites and flying cargo to the space station for NASA at a fraction of the former cost.

Musk's fascination with technology dates to his childhood in South Africa.

Maye Musk: He just found everything interesting. He wanted to explore everything. He knocked his teeth out 'cause he was just falling off stuff. Kimbal too, actually. Yeah.

We spoke with his mother Maye, sister Tosca and brother Kimbal.

Scott Pelley: Ambition to do what?

He was interested in computers early. At the age of 12 he wrote the software for a video game and sold it. Against his parent's wishes he set his sights on the software capitol of the world.

Elon Musk: It seemed like the vast majority of such things came from the United States. I also, like, read a lot of comic books-- and they all seemed to be set in the United States. So it's like, "Well, this is a good place-- this is where-- I gotta go to this place."

He earned degrees in business and physics at the University of Pennsylvania and asked his brother to join him in California.

Kimbal Musk: When we moved to Silicon Valley we had nothing. So we actually lived in the office. And we would sleep on the floor in the evening and go shower at the YMCA the next morning. And then we would be ready to go before some of our employees would arrive, so they wouldn't think we were actually sleeping in the office.

In that office, Musk invented a program that gave step by step directions between addresses. That's common today in cars and phones but in 1995 it was magic. In four years he made $22 million.

Scott Pelley: Only in America.

Next, he started an online banking firm that he grew into PayPal, a system for making purchases on the Internet.

Scott Pelley: And you sold PayPal to eBay for what?

His share was $180 million and he bet it all on Tesla and SpaceX. But at the age of 37, he hit rock bottom. His first rockets failed to reach orbit, and an early model Tesla roadster had quality problems.

Scott Pelley: In 2008, the rocket company is not going well, you've had three failures.

Scott Pelley: and the American economy has tanked in the worst recession since the Great Depression.

Scott Pelley: What was that year like for you?

Elon Musk: And I'm getting divorced, by the way, add to that. That was definitely the worst year of my life.

That terrible year was captured in a documentary called "Revenge of the Electric Car." His plant was filled with flawed cars that couldn't be delivered.

["Revenge of the Electric Car:" Holy mackerel. Jesus! We have like an army of cars here. Like, Jesus! This is frightening. It's really pedal to the metal here. I mean, each month that passes is literally costs us tens of million of dollars we need to appreciate that.]

To save Tesla, Musk needed millions more from investors. His fortune was gone.

Elon Musk: When we'd call people and say, "Hey, would you like to invest?," they'd be angry that we just called. That it's like-- it's not like no-- no and-- no and-- you know, various expletives.

Scott Pelley: He was essentially broke.

Elon Musk: I remember waking up the Sunday before Christmas in 2008, and thinking to myself, "Man, I never thought I was someone who could ever be capable of a nervous breakdown," but I felt, "This is the closest I've ever come." 'Cause it-- it seemed pretty-- pretty dark.

Toward the end of 2008, SpaceX prepared its fourth attempt.

Elon Musk: We were running on fumes at that point we had virtually no money.

Scott Pelley: So a fourth failure?

Elon Musk: A fourth failure would have been absolutely game over.

Elon Musk: Yeah. It's bad enough to have three strikes, having four strikes is really kaput.

"I remember waking up the Sunday before Christmas in 2008, and thinking to myself, 'Man, I never thought I was someone who could ever be capable of a nervous breakdown,' but I felt, 'This is the closest I've ever come.'"

But flight four was flawless and in Musk's world, it lit the darkness.

Then, as often, the week of Christmas became a time when little boy dreams are answered.

Elon Musk: NASA called and told us that we'd won a $1.5 billion contract. And I couldn't even hold the phone, I just blurted out, "I love you guys."

Scott Pelley: They saved you.

Elon Musk: Yeah, they did.

Elon Musk: Well, I'll tell you that was, that was definitely helpful, yeah.

Scott Pelley: So you were saved in the period of three days by two completely unexpected events.

The rockets haven't failed since. His cargo capsule has docked three times with the space station. And in the California plant they're fitting seats for what they hope will be eventual manned missions. SpaceX is also testing a rocket that can be reused, softly landing on a column of flame. Another step on a longer journey.

Elon Musk: I'd love to have SpaceX be the company that brings humanity to Mars and I hope I see it while I'm still alive.

He's at SpaceX three days a week, two days at Tesla and weekends are at home with his five sons from his first marriage and his second wife Talulah whom he met in london.

Talulah Riley: It all happened very fast. We were-- we were engaged after, I think, sorta two-- two weeks of knowing each other. And I was 22 and it was-- there were all these boys. And it was-- which was the best part. And-- it was-- it was fast. And then we were in it.

Scott Pelley: You knew each other two weeks before you got engaged?

Scott Pelley: What was so attractive?

Talulah Riley: Well, he was very charming and definitely the most interesting and eccentric person I have ever met.

Tesla stock has rocketed up nearly 500 percent but that's not based on the cars he's selling -- that price is counting on the hope that Tesla will create an electric car at one-third the cost of the Model S which runs about $100,000. This is what stands in the way. This slab covered in plastic is the battery.

This is how it fits into the bottom of the chassis. Trouble is the battery's so expensive musk can't build a $35,000 car with acceptable range. To make Tesla successful, he must reinvent battery manufacturing. Musk has just announced a $5 billion factory to be built in the U.S. which, he says, will make more lithium ion batteries than all the other plants on earth combined.

Gambles like that have led a lot of people on Wall Street to bet against him--taking investment positions that count on Tesla stock to fail. But so far, those pessimistic investors have lost a lot of money.

Scott Pelley: What is it about you that seems to invite skepticism?

Elon Musk: Well, I think it's because we're doing these things that seem unlikely to succeed. And we've been fortunate, and at least thus far, they have succeeded.