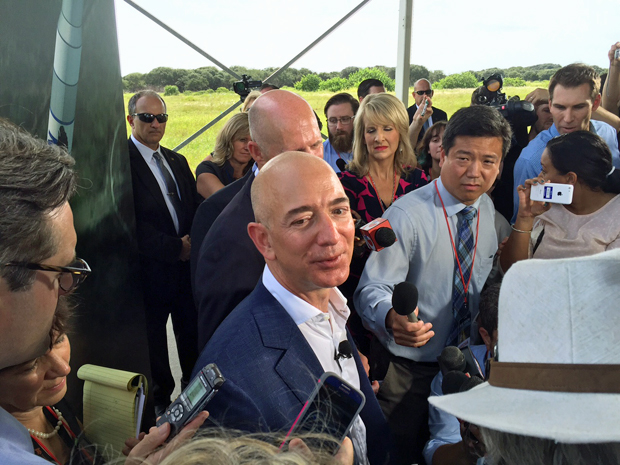 Amazon founder Jeff Bezos said Tuesday he plans to build reusable rockets in a new state-of-the-art manufacturing facility just outside the Kennedy Space Center and launch the boosters from a nearby Air Force pad in a commercial venture expected to bring 330 jobs and $200 million to Florida's Space Coast.

Speaking at launch complex 36 at the Cape Canaveral Air Force Station, Bezos told a throng of space officials, reporters and dignitaries, including Florida Gov. Rick Scott and Sen. Bill Nelson, that his company, Seattle-based Blue Origin, will not just be launching in Florida, "we're building here."

"At Exploration Park (near the Kennedy Space Center), we'll have a 21st-century production facility where we'll focus on manufacturing our reusable fleet of orbital launchers and readying them for flight again and again," Bezos said.

Building a vehicle assembly facility near the launch site, he said, will ease "the challenge of processing and transporting really big rockets."

"We'll be launching from here later this decade," Bezos said, but "you will hear us before you see us. Our American-made BE-4 engine, the power behind our orbital launch vehicle, will be acceptance tested here."

The powerful BE-4, burning liquid oxygen with liquefied natural gas to generate 550,000 pounds of thrust, also will be used in pairs in the first stage of United Launch Alliance's new Vulcan rocket, a heavy-lift booster intended to replace the company's workhorse Delta and Atlas rockets.

A less-powerful engine, the BE-3, also will be used aboard the new rockets. It already powers Blue Origin's New Shepard suborbital rocket system, designed to boost a crew- or instrument-carrying capsule just above the discernible atmosphere for brief periods of weightlessness before a parachute descent to Earth.

The New Shepard booster is designed to fly itself back to a vertical, powered landing using the same technology planned for the company's still-unnamed orbital rockets. Blue Origin launched a partially successful New Shepard test flight from its West Texas test facility in April and plans a second test later this year, Bezos said.

Launch complex 36 was used to send 145 NASA and military missions into space between 1962 and 2005. It will be refurbished to support the Blue Origin launch vehicle. The BE-4 test stand will be built nearby, along with a processing facility to prepare the boosters for flight.

A much larger building, where the rockets will actually be built, will be located on Merritt Island, just south of the Kennedy Space Center, in an aerospace industrial park on state property. Bezos said details are still being worked out, but the facility will feature several hundred thousand feet of floor space.

The manufacturing facility will be a state-of-the-art rocket plant.

"We're talking about bringing raw aluminum and raw carbon fiber here, it'll be milled and formed and friction stir welded here and so on," Bezos said. "Not just final assembly and certainly not just vehicle stacking (for launch). We're talking about ... some pretty deep manufacturing as well."

Bezos declined to provide performance details about the new rocket, how much weight it will be able to boost to low-Earth orbit, when unpiloted test flights might begin or when crewed missions might fly. He promised more details about the rocket next year.

He also declined to discuss the business model for commercial rocket launches other than to say it is a very expensive enterprise.

Like other wealthy space entrepreneurs who have jumped into a new commercial space race -- Microsoft co-founder Paul Allen, SpaceX's Elon Musk and Virgin Galactic's Richard Branson -- Bezos said he was motivated by a lifelong passion for space and a strong desire to play a role in its exploration.

"The people who are attracted to this field are like me, it's in their heart, they are missionary, they want to build rockets, they want to see humanity fly into space," he told a small group of reporters at a media roundtable following the rocket announcement.

Joking that "if my only goal was to make money, I would just open a new kind of snack food company," Bezos said he never thought he would have the money to finance a serious space initiative.

"It's only because of Amazon that I have the financial resources to do this," he said, smiling and quickly adding, "so I encourage all of you, please, renew your Prime memberships, shop early and shop often! Every time, you'll be helping Blue Origin."

Unlike SpaceX, with its oft-interviewed founder, lucrative government contracts and well-publicized NASA launchings, Bezos and Blue Origin have operated in near total secrecy over the past decade, building and testing rocket engines and designing a new generation of boosters and spacecraft.

Like Musk, Bezos said the key to commercial space travel is lowering the cost of launch. And the key to that, they both agree, is reusability.

SpaceX is working on recovering the first stage of its Falcon 9 rocket, using an off-shore barge as a landing platform. The company has not yet been fully successful, but Musk believes it will eventually work, clearing the way for boosters to land back at the Air Force station, reducing the cost and complexity of recovery.

Bezos said Blue Origin likely will use an off-shore barge of some sort for initial landing attempts with the new orbital launcher.

"Do we want to go to Mars? Absolutely. But we want to go everywhere. And if you want to go everywhere, then you need to dramatically lower the cost of space. And that's what we're really focused on. The physics of this are unbelievably hard. Our number one opponent is gravity. We have to work very, very hard to get into low-Earth orbit safely and at low cost."

The orbital rocket will consist of two stages, one powered by the BE-4 and the other, presumably, by the BE-3. As currently envisioned, only the first stage will be reusable. Both the orbital launcher and the New Shepard booster will feature autonomous abort systems to quickly pull a crew or cargo capsule away from a malfunctioning rocket.

Blue Origin and United launch Alliance last week announced an agreement to expand production of the BE-4 to support ULA's Vulcan rocket, which will feature two of the power plants in its first stage.

The engine is at the center of an ongoing controversy as ULA works to replace the Russian-built RD-180 engine that powers the company's Atlas 5 rocket. Widespread criticism of ULA's reliance on a Russian engine to boost U.S. national security payloads into orbit was initiated primarily by Musk, who is challenging ULA for lucrative Air Force launch contracts.

The Wall Street Journal and Reuters recently reported that U.S. engine-builder Aerojet Rocketdyne is trying to buy ULA from its parent companies, Boeing and Lockheed Martin, for $2 billion. Bezos said only that his company was focused on delivering a reliable engine to ULA.