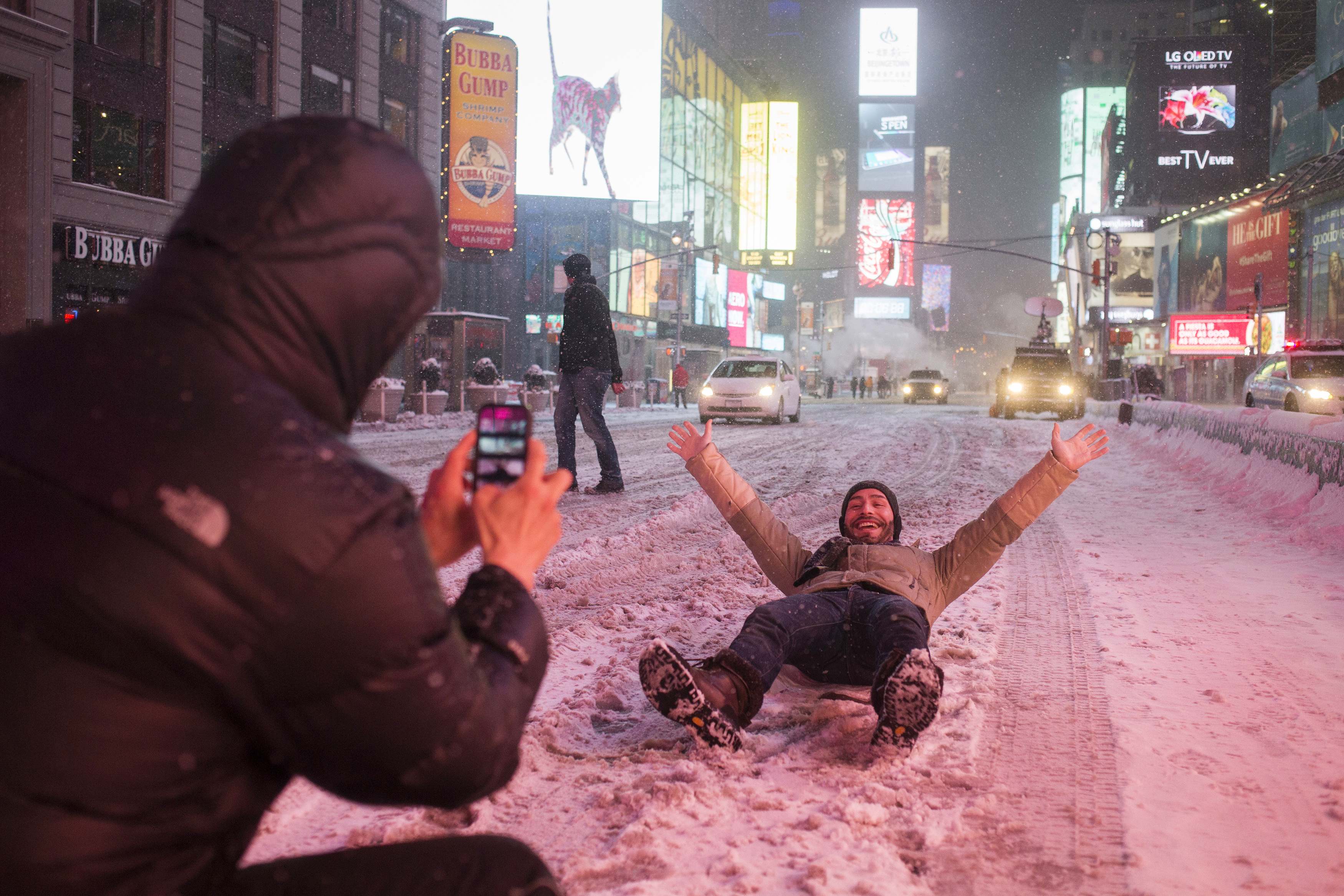 NEW YORK -- Tens of millions of people along the East Coast hunkered down for a storm that for most was apparently failing to live up to predictions of being one of the worst they'd ever seen.

Forecasters originally said the storm could bring 1 to 3 feet of snow and punishing hurricane-force winds. But early Tuesday, they downgraded most of those numbers, saying New England would fare the worst, but even there not as bad as expected.

Bruce Sullivan of the National Weather Service said Boston and Providence, Rhode Island, could get the most snow, about 2 feet. New York could see 10 inches to 20 inches, Hartford, Connecticut, 1 to 2 feet, and Philadelphia and central New Jersey about 6 inches.

By 5 a.m. EST Tuesday, Manhattan's Central Park had only about six inches and the borough of Brooklyn five.

But to the east, parts of Long Island has as much as 18 inches.

The Hartford, Connecticut area had 14 inches and Sandwich, Massachusetts about 13.

More than a foot of snow has been reported in several Rhode Island communities, and forecasters are warning some to be prepared for another foot as snow and high winds keep coming.

Snowfalls in Washington D.C. and Baltimore fell short of predictions, with about one inch each.

As of 5:40 a.m. EST, some 10,000 customers were in the dark in Massachusetts, according to figures compiled by CBS News.

Police say a 17-year-old boy was killed while snow-tubing on Long Island. Suffolk County police say it happened around 10 p.m. Monday in Huntington. The boy was one of three teens taking turns snow-tubing down Chester Court. Police say he apparently lost control of the tube and struck a light pole.

The National Weather Service over the weekend had issued a blizzard warning for a 250-mile swath of the region, meaning heavy, blowing snow and potential whiteout conditions.

Gary Szatkowski, the meteorologist in charge of the National Weather Service's office in Mt. Holly, New Jersey, apologized for the forecast Tuesday morning.

All too aware that big snowstorms can make or break politicians, governors and mayors moved quickly to declare emergencies and order the shutdown of streets, highways, bridges and tunnels to prevent travelers from getting stranded and to enable plows and emergency vehicles to get through.

In a press conference Tuesday, New York Gov. Andrew Cuomo defended officials' reaction to the dire predictions of forecasters, citing the massive snowstorm in Buffalo in November that was not predicted to be bad. The severity caught nearly everyone by surprise.

Citing "very dangerous conditions," Connecticut State Police closed all roads statewide at about 5:30 a.m. By Tuesday morning, only the bans in in Fairfield and Litchfield counties had been lifted.

Both New York and New Jersey had decided to begin lifting the travel bans put in place around 7:30 a.m. ET.

Cuomo said even though people can begin driving, he wanted to keep the roads as clear as possible for plows and emergency vehicles.

"We don't want to give people a false sense of security," Cuomo said. "If you have to travel you can, but we don't recommend it."

Officials in the coastal town of Scituate, Massachusetts shut off power to certain streets along low-lying, flood-prone areas as a precautionary measure. They say the decision was based in part on fires in December 2010 caused by an inability to shut power off after a house fire had started and an arcing wire jumped to an adjacent home. Two homes were lost as result. The situation created by the live electrical lines in the house posed a grave threat to the firefighters who battled the blaze in chest-high water.

Wind-driven waves can permeate structure walls and start electrical fires, posing a significant hazard in thickly settled areas where there is flooding and storm debris.

At about 1 a.m. EST, Scituate was getting slammed with wind gusts as high as 52 mph.

Light snow fell steadily early Tuesday in midtown Manhattan as a few municipal trucks rumbled down empty streets. The city had an almost eerie, post 9/11 feel to it: no airplanes in the sky. An unexpected quiet.

Nearly 8,000 flights in and out of the Northeast were canceled, and many of them may not take off again until Wednesday. Airlines have cancelled 4,615 flights, about 15 percent of all daily airlines flights in the United States, according to data from FlightAware. Virtually all flights to and from the three major New York area airports, as well as the Philadelphia and Boston airports were cancelled for Tuesday.

Airlines cancelled 379 flights, but FlightAware released a statement saying it expects that number "to rise slightly once airlines can gauge how long the recovery effort will take."

Schools and businesses let out early. Government offices closed. Shoppers stocking up on food jammed supermarkets and elbowed one another for what was left. Broadway stages went dark.

Mayor Bill de Blasio urged New Yorkers to go home and stay there, adding: "People have to make smart decisions from this point on."

Commuters like Sameer Navi, 27, of Long Island, were following the advice.

Navi, who works for Citigroup in Manhattan, said he takes the Long Island Rail Road every day and left work early Monday after warnings by local officials to get home before the brunt of the storm. "I did leave earlier than usual," he said.

In New Jersey, plows and salt spreaders remained at work on the roads Monday night in Ocean County, one of the coastal areas that was expected to be among the hardest hit. There was a coating of snow on the roads but hardly any vehicles were traveling on them, as residents seemed content to stay indoors and monitor the storm in comfort.

Most businesses in the area had gone dark, including some convenience stores and gas stations.

Earlier in the day, Nicole Coelho, a nanny from Lyndhurst, New Jersey, stocked up on macaroni and cheese, frozen pizzas and milk at a supermarket.

"I'm going to make sure to charge up my cellphone, and I have a good book I haven't gotten around to reading yet," she said.

Ben Shickel went grocery shopping in Chestnut Hill, Massachusetts, and found shelves had been cleaned out.

Last minute shoppers filed into the Jersey City ShopRite Monday evening, looking to stock up before the brunt of the storm hit. "I heard it's supposed to be snowing for two days straight, so we plan on staying inside and munching," said 18-year old Christian Waiters, who serves in the military.

On Wall Street, however, the New York Stock Exchange stayed open and said it would operate normally Tuesday as well.

Coastal residents braced for a powerful storm surge and the possibility of damaging flooding and beach erosion, particularly in New Jersey and on Cape Cod in Massachusetts. Officials in New Jersey shore towns warned people to move their cars off the streets and away from the water.

Utility companies across the region put additional crews on standby to deal with anticipated power outages.