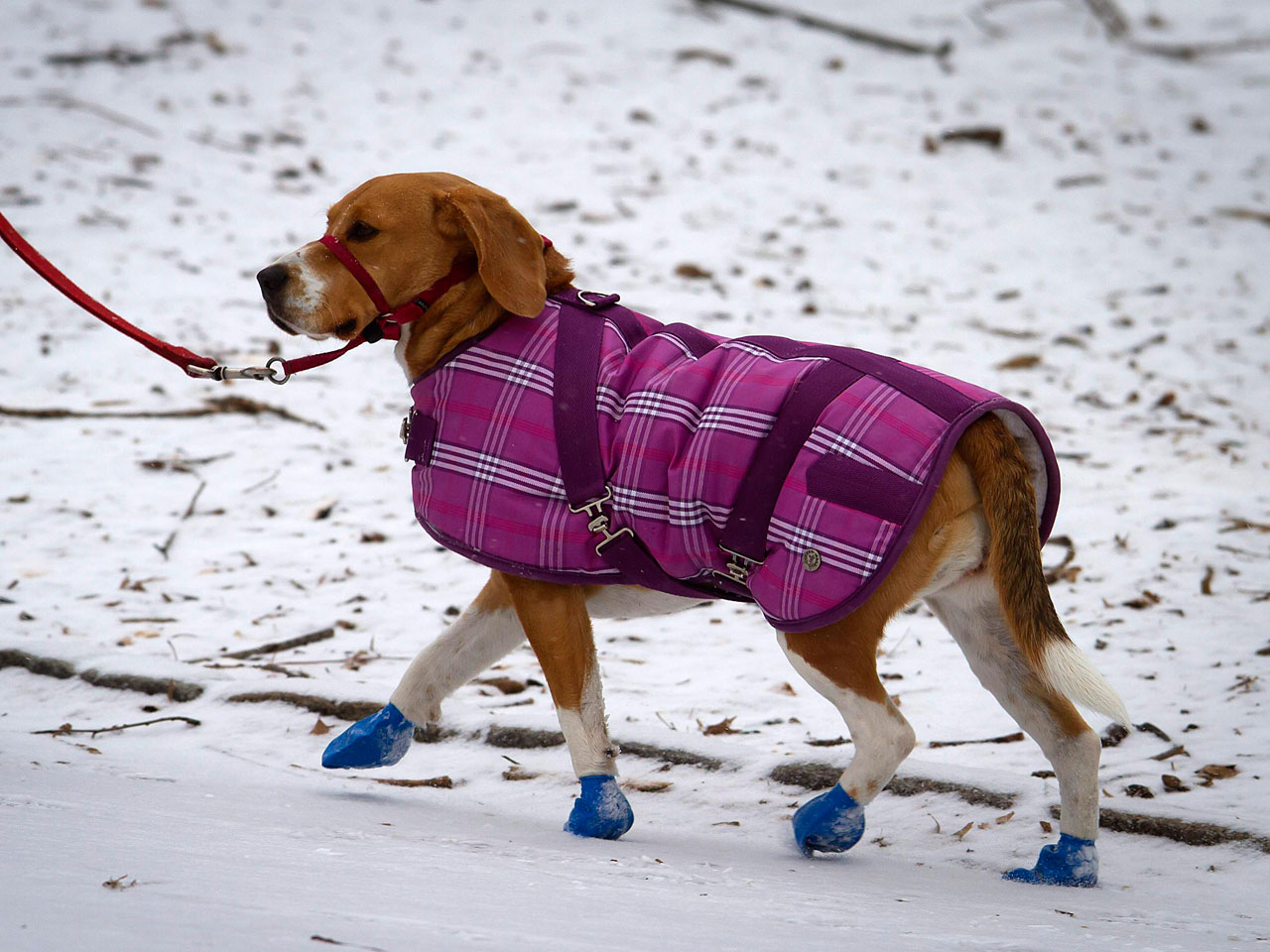 NEW YORK - Cities big and small along the Philadelphia-to-Boston corridor of more than 35 million people began shutting down and bundling up Tuesday against a powerful and potentially historic storm that could unload 1 to 3 feet of snow.

Officials urged residents to stay safe and prepare early as the region's transportation systems prepared to grind to a halt. Numerous utility companies warned that power could get knocked out to thousands due to high winds and heavy snow.

Four states -- New York, New Jersey, Connecticut and Massachusetts -- have declared a state of emergency, hours before the worst of the storm hit large metropolitan areas.

Forecasters said the storm would build into a blizzard, and the brunt of it would hit Monday evening and into Tuesday.

Some 7,000 flights through Wednesday have been canceled, schools and businesses closed early, and cities mobilized snowplows and salt spreaders, as they dealt with a dangerously windy blast that could instantly make up for what has been a largely snow-free winter in the urban Northeast.

Snow was already falling in several cities, including Philadelphia and New York, with Boston up next in the afternoon. Forecasters said the brunt of the storm would hit Monday evening and into Tuesday.

Boston is expected to get 2 to 3 feet, New York 1.5 to 2 feet, and Philadelphia a foot or so. The National Weather Service issued a blizzard warning for a 250-mile swath of the region, meaning heavy, blowing snow and potential whiteout conditions.

In Hartford, Connecticut, Frank Kurzatkowski filled several five-gallon buckets of water at his home in case the power went out and his well pump failed.

"I've got gas cans filled for my snowblowers," he said. "I have four-wheel-drive."

Supermarkets and hardware stores did a brisk trade as light snow fell in New Jersey.

Nicole Coelho, 29, a nanny from Lyndhurst, New Jersey, was preparing to pick up her charges early from school and stocking up on macaroni and cheese, frozen pizzas and milk at a supermarket. She also was ready in case of a power outage.

"I'm going to make sure to charge up my cellphone, and I have a good book I haven't gotten around to reading yet," she said.

New York Gov. Andrew Cuomo urged commuters to stay home on Monday and warned that mass transit and roads could be closed before the evening rush hour, even major highways such as the New York Thruway and the Long Island Expressway. Cuomo said the New York City subway system began to limit service around 8 p.m., and will shut down completely at 11 p.m. Monday.

Cuomo has also ordered a travel ban on roads south of Ulster and Sullivan counties beginning at 11 p.m.

"The expression is, they want to put the trains away," Cuomo said.

Connecticut Gov. Dannel P. Malloy ordered a travel ban on Connecticut highways starting at 9 p.m., while officials in other states asked residents to avoid any unnecessary travel. About half of all flights out of New York's LaGuardia Airport were called off Monday, and about 60 percent of flights heading into the airport were scratched.

A travel ban went into effect on all roads in Connecticut at 9 p.m.

Boston's Logan Airport said there would be no flights after 7 p.m. Monday, and the shutdown could last until late Wednesday.

Jeff Regis found himself stuck at Logan on Monday night after his connecting flight from Reykjavík, Iceland, to Montreal was canceled.

"It's pretty frustrating," said the 25-year-old, who recently finished a master's program in computer games technology at Abertay University in Dundee, Scotland. "Apparently the airport's closed tomorrow so my next available flight is in two days, so I'm going to have to pay two nights at a hotel out of my own pocket."

Despite the frustration, Regis - who's hoping to land a job in Montreal - said he's used to the snow, having grown up in Ontario.

Massachusetts Gov. Charlie Baker warned residents to prepare for roads that are "very hard, if not impossible, to navigate," power outages and possibly a lack of public transportation. Wind gusts of 75 mph or more were possible for coastal areas of Massachusetts, and up to 50 mph farther inland, forecasters said.

New Jersey Gov. Chris Christie said he had declared a state of emergency, and that government offices would be closed on Tuesday, with early closures on Monday.

"This is a different kind of storm than what we've had before," Christie said.

New York City Mayor Bill DeBlasio said the streets of the city will become off-limits to all non-emergency vehicles beginning around 11 p.m. ET. He urged New Yorkers to stay home and out of the way. A total of 2,400 sanitation workers will be deployed around the city to continuously clear its 6,000 miles of roadways, DeBlasio said.

Broadway theaters, however, are keeping their doors open - at least for now - as a blizzard bears down on Times Square. The Broadway League says all shows are scheduled to go on Monday, a traditionally quiet night with only a few shows available. No firm decision about Tuesday has been made.

On Wall Street, the New York Stock Exchange said it will stay open and operate normally on Monday and Tuesday.

The United Nations announced it was closing it's Manhattan headquarters on Monday at 2:30 p.m. ET, and all of Tuesday.

The Nassau University Medical Center on Long Island increased staff and outfitted vehicles with snow gear. Hospital officials said they expect a large influx of patients as doctors' offices and clinics close because of the weather.

A tractor-trailer jackknifed, and a beer truck crashed into the median on Interstate 81 near Harrisburg, Pennsylvania, during the morning commute. No injuries were reported.

Some schools were planning to close early or not open at all Monday in Pennsylvania, New Jersey, New York and Connecticut.

The Washington area expected only a couple of inches of snow. More than 200 flights were canceled ahead of the weather in the Washington-Baltimore region on Monday, and Amtrak announced that it plans to suspend service in the New England region on Tuesday.

Service between New York and Washington on Monday was modified, and passengers were warned to expect delayed frequencies of trains.

The Super Bowl-bound New England Patriots expected to be out of town by the time the storm arrived in Boston. The team planned to leave Logan Airport at 12:30 p.m. Monday for Phoenix, where the temperature will reach the high 60s.