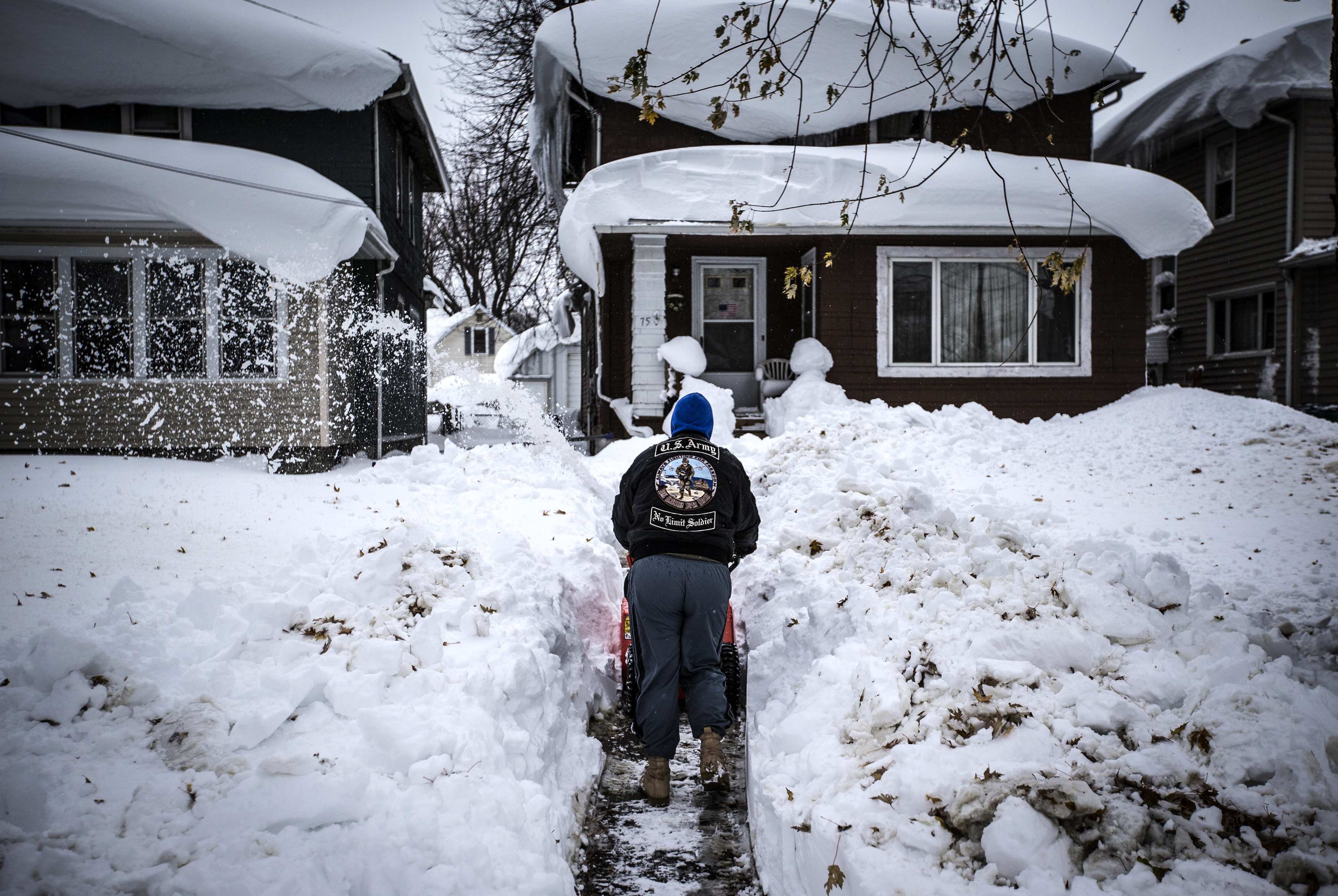 BUFFALO, N.Y. -- The massive snow problem in western New York is about to turn into a massive melting problem. Seven feet of snow is expected to turn into record flooding as temperatures rise and rain falls.

The storm has been blamed for at least 13 deaths, according to CBS affiliate WIVB in Buffalo. There have been more than 30 major roof collapses, most involving farm and flat-roof buildings.

Authorities warned that rain expected Saturday and Monday would add to the weight and strain on buildings.

With roughly the equivalent of six inches of rain tied up in the snowpack, the National Weather Service issued a flood watch for 1 p.m. Sunday through 7 a.m. Wednesday, with temperatures forecast to be near 50 degrees on Sunday and near 60 on Monday.

Weather Service meteorologist Jon Hitchcock said there might be trouble with drainage as snow and the uncollected autumn leaves underneath block catch basins.

Cuomo said the state was sending in hundreds of pumps, more than 50 boats, helicopters and high-axle vehicles that can operate in 4 to 5 feet of water.

WIVB reported that more 176,000 sand bags were ready for use and more were being assembled. Swift water rescue teams were also on standby.

"If we're lucky we won't need any of it," Cuomo said. "But our motto is prepare for the worst and hope for the best."

Erie County Executive Mark Poloncarz said 5,500 people from across the state have come to the area to help, including National Guardsmen.

The snow, which began falling late Monday and finally cleared out of all areas by daybreak Friday, remained a huge challenge.

The weekend offered the region a chance to dig out, with more than 50,000 tons of snow moved by truck into parking lots, being re-purposed as dumping areas.

All around the area, Buffalo was living up to its nickname: "The City of Good Neighbors."

"I know that people really need to get shoveled out, especially some of the older folks, so I'm just doing my part to help out," said Beth Bragg, who joined hundreds of other volunteers in a "shovel brigade."

"They're like angels," said Kevin Masterson, 61, after a handful of volunteers swarmed in to free his and his brother-in-law's cars from the drifts. "I was out shoveling and... all of the sudden I had all these people."

One of the volunteers, Greg Schreiber, said he'd keep gong "until the back gives out."

Gabriel Cardarella worked on one home for three hours and still wasn't done.

"Right now even with the little snow blower that i have up on the roof, it's only taking off the top two or three feet," Cardarella said. "The rest you almost have pry off -- it's like rock."

Seneca Street in south Buffalo was jammed with dump trucks, military vehicles and front loaders rumbling through the streets as they hauled away the canyon walls of snow.

"It's just a war zone here," said Eric Ginsburg, standing outside of his store, Ginzy's. "All the military here, the police. It's just crazy. Most snow I've ever seen."

After Margie Page, 81, paid $600 to have the snow cleared from the roof of her mobile home in suburban Cheektowaga, a group of volunteers from Mennonite Disaster Service arrived at the mobile home park ready to go to work.

"I should have waited," Page said, "but I was so afraid of my roof collapsing. I was so anxious to get it done."

Officials urged people to put off nonessential travel so snow removal efforts could progress. The state Thruway, however, was fully reopened Saturday -- four days after a 132-mile stretch had to be closed, leaving motorists stranded.

U.S. Senator Chuck Schumer said he thinks the storm will reach the $3.2 million threshold for FEMA assistance, which would go to homeowners, farmers and small business owners.

Schumer said the region has had trouble with FEMA in the past, referencing a storm in 2006, but that he's is confident that won't happen again. He said FEMA hopes to be in Buffalo Tuesday to begin making assessments.