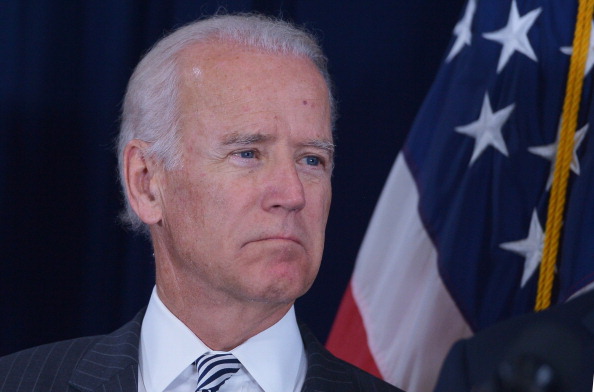 Vice President Joe Biden on Wednesday promised justice for two American journalists who were beheaded, warning the United States would follow the Islamic extremists who executed them "to the gates of hell."

"When people harm Americans, we don't retreat... They should know we will follow them to the gates of hell until they're brought to justice, because hell is where they will reside," Biden said during a speech at a Naval shipyard in New Hampshire.

Sen. John McCain, R-Arizona, said repeatedly during the 2008 presidential campaign that he would follow Osama bin Laden to the "gates of hell," and Biden has borrowed that phrase a couple times since.

While Biden, joined by Sen. Jeanne Shaheen, D-N.H. and other Democrats from the state, was primarily at the Portsmouth shipyard to talk about the economy, he opened his remarks by expressing his remorse over the killings of journalists James Foley and Steven Sotloff.

"Steven put his life on the line as a journalist to tell the stories of the Syrian people," the vice president said. "When these barbarians replicated with Steven what they did with Foley, who was from New Hampshire, they somehow think that is going to lessen U.S. resolve, frighten us, intimidate us. But if they think the American people will be intimidated, they don't know us very well."

Hougeson was referencing Mr. Obama's recent remarks on the United State's uncertain military response in Syria to the threat of the Islamic State of Iraq and Syria (ISIS).

Biden praised the shipyard for supporting a strong, middle-class workforce and supporting the U.S. Navy for two centuries. He hailed both Democratic and Republican lawmakers, including Sen. Kelly Ayotte, R-New Hampshire, for keeping the shipyard open.

The partnership the shipyard has created with the Navy, with labor unions and with community colleges should serve as a model for the rest of the nation, he said.

"You have a clear strategy to train workers where the work is," he said. "This is how you build a world class workforce... able to live a middle class life."