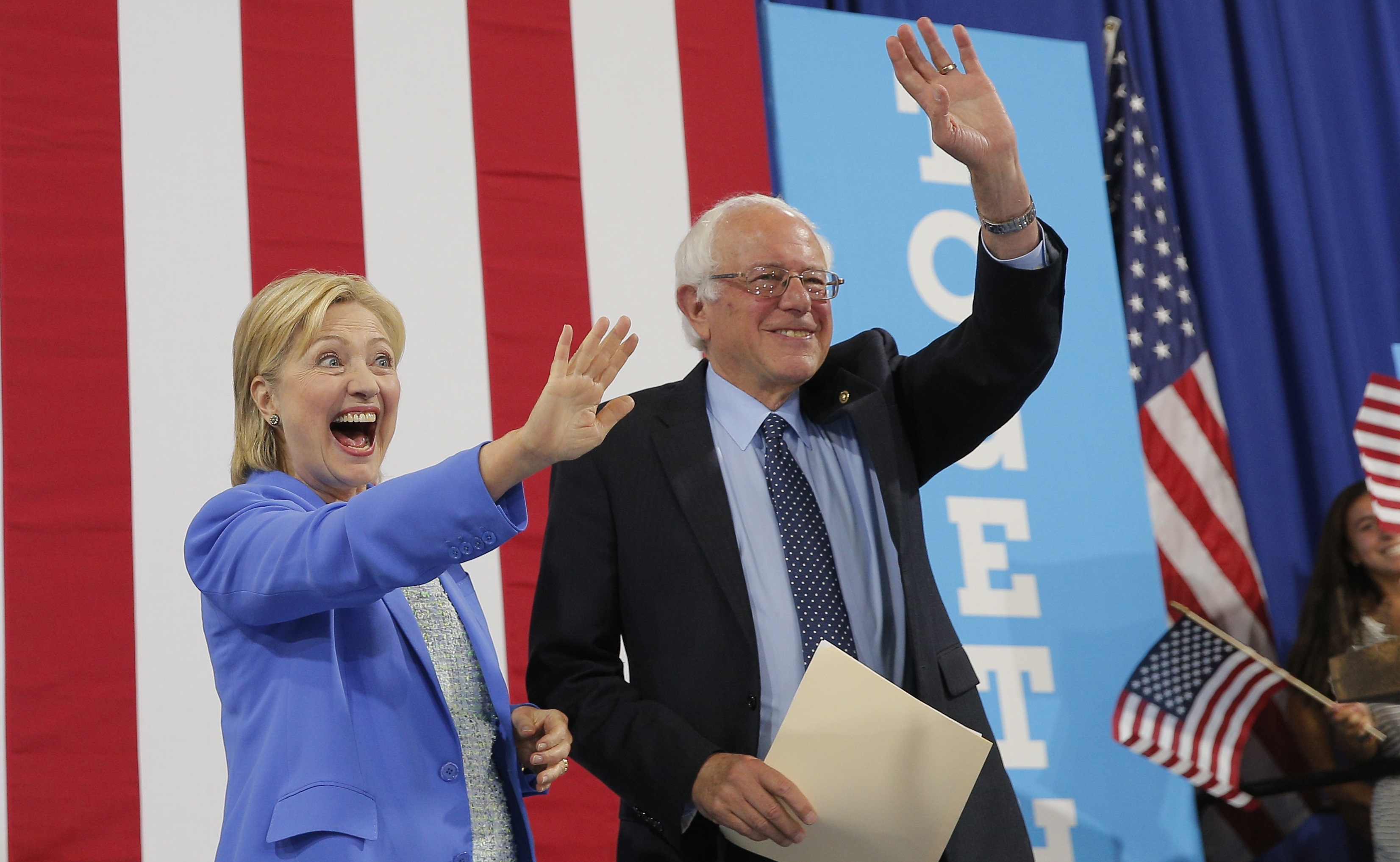 "She will be the Democratic nominee for president," Sanders said of Clinton, as they stood side by side at Portsmouth High School, "and I intend to do everything I can to make certain she will be the next president of the United States. I have come here to make it as clear as possible as to why I am endorsing Hillary Clinton and why she must become our next president."

Sanders praised Clinton as a "great First Lady," and a "fierce advocate" for children who would make "an outstanding president."

"I am proud to stand with her today," Sanders said.

The joint rally was weeks in the making: Clinton and Sanders met face-to-face about a month ago with their campaign managers at a hotel in Washington and since then, their campaign aides have been working tirelessly toward this event. Sanders repeatedly resisted throwing his support behind Clinton after she clinched the nomination, telling his supporters at a series of rallies in New York late last month that their "political revolution" wasn't over.

At one of the events, in Albany, the crowd booed when Sanders noted his staff was working with Clinton's. Sanders stressed the need for the Clinton campaign to come up with serious proposals.

"Never have!" yelled a man in the audience. Sanders was cautious. "Well, we will see," he said.

In an interview with CBS This Morning at the time, Sanders explained why he was withholding his endorsement: "Because I have not heard her say the things that I think needs to be said," he said.

While Sanders and Clinton have long maintained that they have more in common than not, the two Democrats disagreed on many critical issues to their party, including how to make college more affordable, how high to raise the minimum wage and how to provide healthcare to the most Americans. But in recent days, under Sanders' influence, Clinton has tweaked her proposals on education and healthcare and an amended draft of the party platform included many of his policy priorities, including a $15 an hour federal minimum wage.

Those victories led to Sanders' endorsement and, in his remarks in Portsmouth, Sanders praised Clinton's agenda at length.

"There was a significant coming together between the two campaigns and we produced," he said, pausing for applause, "we produced by far, the most progressive platform in the history of the Democratic Party."

It remains to be seen whether or not Sanders and Clinton's shared platform will be enough to win over some of Sanders' most die-hard supporters, the so-called "Bernie or Bust" voters. Of the 2,000 people gathered inside the high school's gym here, many wore t-shirts or carried signs bearing Sanders' name. One Sanders voter, seated in the stands, held a homemade, cloth sign that read, simply, "nope." A number of his fans could be seen leaving as Clinton took the stage.

Clinton, in her remarks after Sanders' speech, thanked his most steadfast supporters and asked them, directly, to join her campaign.

"Let's open the doors to everyone who shares our progressive values," she said. "I'm asking you to stand with us and then I'm asking you to keep working in the weeks, months and, yes, years ahead. You will always have a seat at the table when I am in the White House."

And, in a nod to Sanders' grassroots base, joked: "We accept $27 donations too, you know?"

Still, there is one thing that is certain: Sanders will do whatever it takes to defeat Donald Trump.

"While Donald Trump is busy insulting Mexicans, Muslims and women and African Americans and our veterans, Hillary Clinton understands that our diversity is one of our greatest strengths," he said.