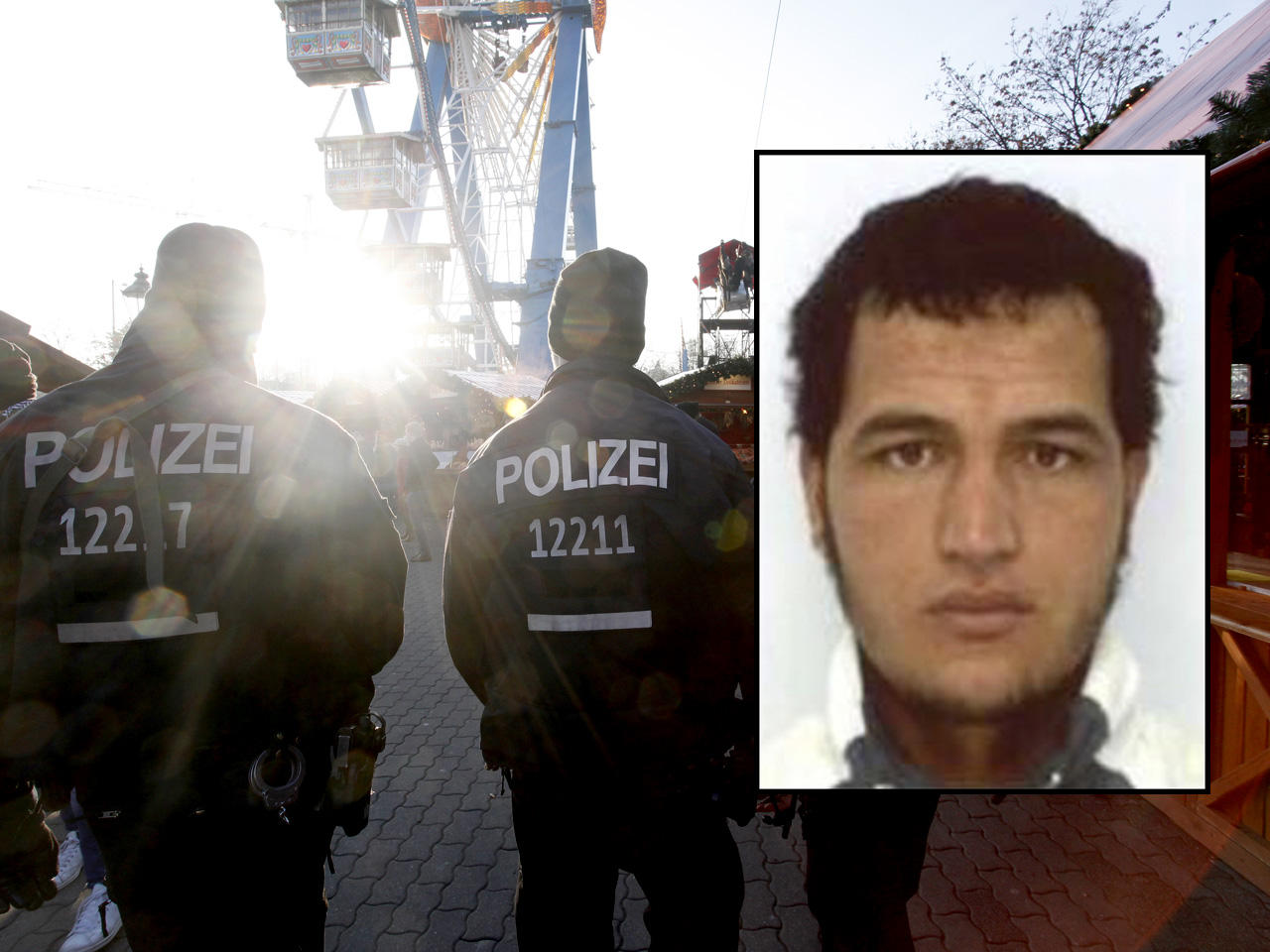 BERLIN - An Europe-wide manhunt has been launch for an “armed and dangerous” Tunisian with ties to Islamic extremists in connection with the Berlin Christmas market attack, according to an European arrest warrant.

A German security official said Wednesday that authorities had considered the man a possible terror threat previously and had been trying to deport him after his asylum application was rejected this summer.

A German security official quoted by local media said the suspect had been put under surveillance, and had his phone tapped, but he went underground earlier this month.

The man is being sought in Germany and across Europe’s border-free travel zone. A European arrest warrant from Germany obtained by The Associated Press states that the man should be considered armed and dangerous. It also indicates that he has at times used at least six different aliases and three different nationalities.

“This is a suspect, not necessarily the perpetrator,” Interior Minister Thomas de Maiziere said after briefing Parliament’s domestic affairs committee. “We are still investigating in all directions.”

Twelve people were killed and 48 injured when a truck plowed into a popular Berlin market Monday evening in an attack claimed by the Islamic State of Iraq and Syria (ISIS.) Twelve of the wounded were still being treated Wednesday for very serious injuries and some were in critical condition, Berlin health officials said.

Law enforcement sources told CBS News that Amri appears to have left personal documents in the truck that rammed into the market on Monday.

The man is in his early 20s and apparently has used various identities, said Stephan Mayer, a senior lawmaker with Germany’s governing conservatives. He said the man was considered part of the “Salafist-Islamist scene” by authorities.

Germany’s chief federal prosecutor told lawmakers that “this Tunisian is a solid lead, his wallet was found in the cab of the truck, but that it’s not clear that he was also the perpetrator,” said Burkhard Lischka of the Social Democrats, the junior governing party.

Jaeger told reporters on Wednesday that state police had launched proceedings against the man on suspicion that he was preparing a serious crime. He said “security agencies exchanged information about this person in the joint counter-terrorism center, the last time in November.”

Separately, the man’s asylum application was rejected in July. German authorities prepared to deport him but weren’t able to do so because he didn’t have valid identity papers, Jaeger said. In August they started trying to get him a replacement passport.

“Tunisia at first denied that this person was its citizen, and the papers weren’t issued for a long time,” Jaeger said. “They arrived today.”

A Tunisian official said German investigators are trying to determine Amri’s role. The official, speaking on condition of anonymity before Germans spoke more about the investigation, said Tunisian authorities were requesting more information on the German probe into the suspect.

CBS News’ Khaled Wassef reports the documents found inside the truck indicates Amri was born in the southern Tunisian city of Tataouine in 1992. According to reports by state broadcaster ARD and Süddeutsche Zeitung newspaper, Amri had arrived in Italy in 2012, and moved to Germany in July 2015 where he applied for asylum.

He was previously arrested for assault, and questioned by police earlier this year, according to reports.

Der Spiegel reports Amri was detained to be deported in Ravensburg on July 30, but it was unclear whether he had returned to Germany after deportation or simply not left Germany at all.

Süddeutsche Zeitung newspaper reported that at one point he asked a police informant in the west German state of North Rhine-Westphalia where he could get hold of a gun.

German authorities have also said Amri was under covert surveillance for several months this year.

Berlin prosecutors told The Associated Press in a statement Wednesday that they launched an investigation against Anis Amri on March 14 followed a tip from federal security agencies.

The tip warned that Amri, who was considered a potential threat by authorities in the western state of North Rhine-Westphalia, might be planning a break-in to finance the purchase of automatic weapons for use in an attack.

Surveillance showed that Amri was involved in drug dealing in a Berlin park and involved in a bar brawl, but no evidence to substantiate the original warning. The observation was called off in September.

Media reports linked him to an ISIS recruitment ring in Germany, led by a man called Ahmad Abdelaziz. Abdelaziz, AKA Abu Walaa al-Iraqi, 32, is an Iraqi preacher suspected of having sent many new ISIS recruits from Germany to Syria and Iraq. He was arrested recently (in November 2016) along with a number of his followers. Abu Walaa had been under police scrutiny for over a year prior to his arrest, and was described by a former ISIS fighter, Anil O., 22, as ISIS’ leader in Germany. Anil O. himself was arrested at Düsseldorf airport in September 2016 on his return from Syria via Turkey. He is believed to have joined ISIS after traveling to Syria in August 2015, the German prosecutor’s office said.

A Tunisian living in France previously convicted of petty crimes was shot to death after carrying out a similar attack on July 14 Bastille Day revelers in the southern French city of Nice, killing 86 people.

Police in Berlin said they had received over 500 tips on the Monday evening attack.

Shortly after the attack, police arrested a Pakistani man found a 1/2 mile from the market who matched witness descriptions of the truck’s driver. However, they released him the next day, saying they did not have evidence tying him to the attack.

The claim of responsibility carried on the ISIS group’s Amaq news agency late Tuesday did not identify the man seen fleeing from the truck, but described him as “a soldier of the Islamic State” who “carried out the attack in response to calls for targeting citizens of the Crusader coalition.”

Germany’s top prosecutor, Peter Frank, told reporters before the ISIS claim that the attack was reminiscent of the Nice rampage and appeared to follow instructions published by ISIS. He also said it wasn’t clear whether there was one perpetrator or several.

Christmas shoppers were out again in the streets Wednesday in the German capital, and Berlin Mayor Michael Mueller said it was “good to see that Berliners aren’t being intimidated.”

“I don’t think there’s any need to be afraid,” he told ZDF television. “The police presence has been significantly heightened ... and of course other measures taken to find the perpetrator quickly.”

Mueller argued that there are limits to increasing security, given the number of public spaces and events.

“It wouldn’t be our free and open life any more if we escalated security measures so much that people worry about going anywhere, that there are strict entry checks,” he said. “We don’t want that. It must be appropriate and goal-oriented.”