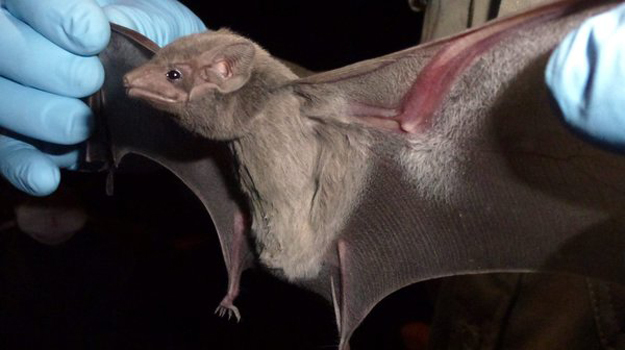 Bats in Saudi Arabia appear to be the source of a mysterious virus that has claimed the lives of 47 and sickened 96 in the Middle East and Europe since last September, health officials reported Wednesday.

For more than 15 months, officials have tried to determine what sparked the outbreak of Middle East Respiratory Syndrome (MERS). They have identified bats with similar viruses in Africa and Eastern Europe, but had not yet found an exact match to MERS.

In the report released published Aug. 21 in Emerging Infectious Diseases, an international team of doctors from EcoHealth Alliance and Columbia University's Center for Infection and Immunity pointed to the Egyptian tomb bat, an insect-eating bat that does not typically bite humans or come near human food supplies.

Researchers collected about 100 fecal samples from seven species of bats living in three locations, veterinary epidemiologist Jonathan Epstein, of EcoHealth Alliance, explained to CBSNews.com. One of the bats was a perfect match for the MERS coronavirus.

Coronaviruses are a family of viruses that cause conditions ranging from the common cold to severe acute respiratory syndrome (SARS), which killed about 800 people during a 2003 pandemic.

The infected bat lived in an abandoned house in Bisha, a small city in Saudi Arabia where the first victim fell ill. The victim was a wealthy 60-year-old man who owned a paint warehouse, according to Dr. W. Ian Lipkin of Columbia. The warehouse's large garden included fruit trees and insects that often attract bats.

Epstein added that while it is exciting to find an exact match in one sample, more testing is definitely needed. "The finding in bats is very exciting because there's insight into the virus, but what we still need to learn is how it's getting from bats into people," Epstein said. "We're still trying to understand the role that other animals such as sheep or camels can play."

One concept is that the virus become airborne once an infected bat's feces dry. People, such as shepherds, squatting in the abandoned buildings where the bats nest may breath in particles of the virus if dust is kicked up. Animals may have contract it in the same fashion, and then transfer it to humans.

Camels, goats, sheep and cows are also being tested for the virus, according Lipkin. Previous reports pointed to camels as the source of the virus.

"We really want to understand if there are other animals involved in transmission to people," Epstein said, explaining that MERS could spread the same way as the SARS virus. "SARS coronavirus is carried by horseshoe bats, but transmission happened in a live animal market in China."

MERS' mortality rate is currently 60 percent, but that number might decline as more cases are being reported of younger victims with milder symptoms, Memish noted. Most of the victims have thus far been old and had chronic conditions such as diabetes or heart disease.

Researchers reported in July that MERS may not claim as many lives as the SARS pandemicbecause the new virus disproportionately affects people with preexisting medical problems, whereas SARS affected healthy and unhealthy individuals alike.

The virus does not easily transfer between people, but Saudi officials are recommending that people with compromised immune systems should be cautious if they choose tomake the annual pilgrimage to Mecca.