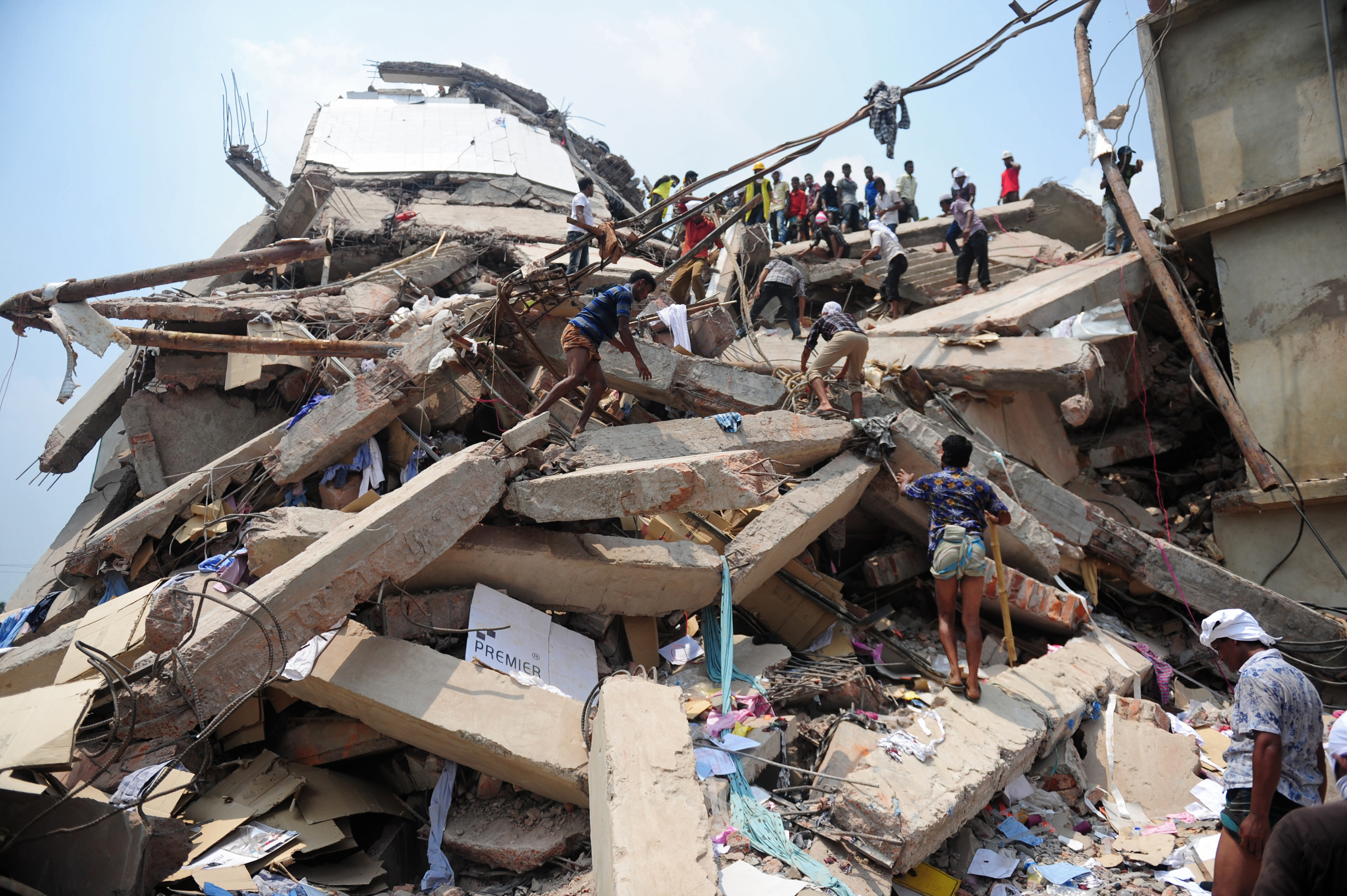 SAVAR, Bangladesh With deep cracks visible in the walls, police had ordered a Bangladesh garment building evacuated the day before its deadly collapse, but the factories flouted the order and kept more than 2,000 people working, officials said Thursday. At least 194 people died when a huge section of the eight-story building splintered into a pile of concrete.

The disaster in the Dhaka suburb of Savar came less than five months after a blaze killed 112 people in a garment factory and underscored the unsafe conditions faced by Bangladesh's garment workers, who produce clothes for brands worn around the world. Some of the companies in the building that fell say their customers include retail giants such as Wal-Mart.

Hundreds of rescuers, some crawling through the maze of rubble in search of survivors and corpses, worked through the night and into Thursday amid the cries of the trapped and the wails of workers' relatives gathered outside the building, called Rana Plaza, which housed numerous garment factories and a handful of other companies.

"Save us brother. I beg you brother. I want to live," moaned Mohammad Altab, a garment worker pinned tightly between two concrete slabs and next to two corpses.

"It's so painful here ... I have two little children," Altab said, his voice weak from exhaustion.

Another survivor, whose voice could be heard from deep in the rubble, wept as he called for help.

"We want to live brother, it hard to remain alive here. It would have been better to die than enduring such pain to live on. We want to live, please save us," the man cried.

After the cracks were reported Tuesday, managers of a local bank that also had an office in the building evacuated their workers. The garment factories, though, kept working, ignoring the instructions of the local industrial police, said Mostafizur Rahman, a director of that paramilitary police force.

The Bangladesh Garment Manufacturers and Exporters Association had also asked the factories to suspend work starting Wednesday morning, hours before the collapse.

"After we got the crack reports, we asked them to suspend work until further examination, but they did not pay heed," said Atiqul Islam, the group's president.

On Thursday morning, the odor of rotting bodies wafted through holes cut into the building. Junior minister for Home Affairs, Shamsul Haque, said that by late Thursday morning a total of 2,000 people had been rescued from the wreckage.

Brig. Gen. Mohammed Siddiqul Alam Shikder, who is overseeing army rescue teams, said the death toll had climbed to 194 as of Thursday afternoon.

Dozens of bodies, their faces covered, were laid outside a local school building so relatives could identify them. Thousands of workers' family members gathered outside the building, waiting for news, as thousands of garment workers from nearby factories took to the streets across the industrial zone in protest.

Shikder said rescue operations were progressing slowly and carefully, so that as many survivors as possible could be saved.

He said rescue teams were standing by with heavy equipment and would "start bulldozing the debris once we get closer to the end of the operation. But now we are careful."

He also said the size of the crowd was interfering with getting more rescuers to the scene.

"We are ready with about 1,000 soldiers and rescue workers from other departments. But a huge crowd is obstructing our effort," he said.

Searchers worked through the night to probe the jumbled mass of concrete with drills or their bare hands, passing water and flashlights to people pinned inside.

"I gave them whistles, water, torchlights. I heard them cry," said fire official Abul Khayer late Wednesday, as he prepared to work late into the night.

Abdur Rahim, an employee who worked on the fifth floor, said a factory manager gave assurances that the cracks in the building were no cause for concern, so employees went inside.

"After about an hour or so, the building collapsed suddenly," Rahim said. The next thing he remembered was regaining consciousness outside.

On a visit to the site, Home Minister Muhiuddin Khan Alamgir told reporters the building had violated construction codes and that "the culprits would be punished."

Abdul Halim, an official with the engineering department in Savar, said the owner was originally allowed to construct a five-story building but he added another three stories illegally.

Among the garment makers in the building were Phantom Apparels, Phantom Tac, Ether Tex, New Wave Style and New Wave Bottoms. Altogether, they produced several million shirts, pants and other garments a year. The New Wave companies, according to their website, make clothing for major brands including North American retailers The Children's Place and Dress Barn, Britain's Primark, Spain's Mango and Italy's Benetton. Ether Tex said Wal-Mart, the world's biggest retailer, was one of its customers.

Many of the retailers distanced themselves from the disaster, saying they were not involved with the factories at the time of the collapse or had not recently ordered garments from them. Only Primark acknowledged it was using a factory in Rana Plaza.

Benetton said in an email to The Associated Press that people involved in the collapse were not Benetton suppliers. Wal-Mart said it was investigating and Mango said it had only discussed production of a test sample of clothing with one of the factories.

The Savar suburb is home to dozens of garment factories. The collapse was even deadlier than the November factory fire that drew international attention to working conditions in Bangladesh's $20 billion-a-year textile industry. The country has about 4,000 garment factories and exports clothes to leading Western retailers, and the industry wields vast power in the South Asian nation.

The Tazreen factory that caught fire lacked emergency exits, and its owner said only three floors of the eight-story building were legally built. Surviving employees said gates had been locked and managers had told them to go back to work after the fire alarm went off.