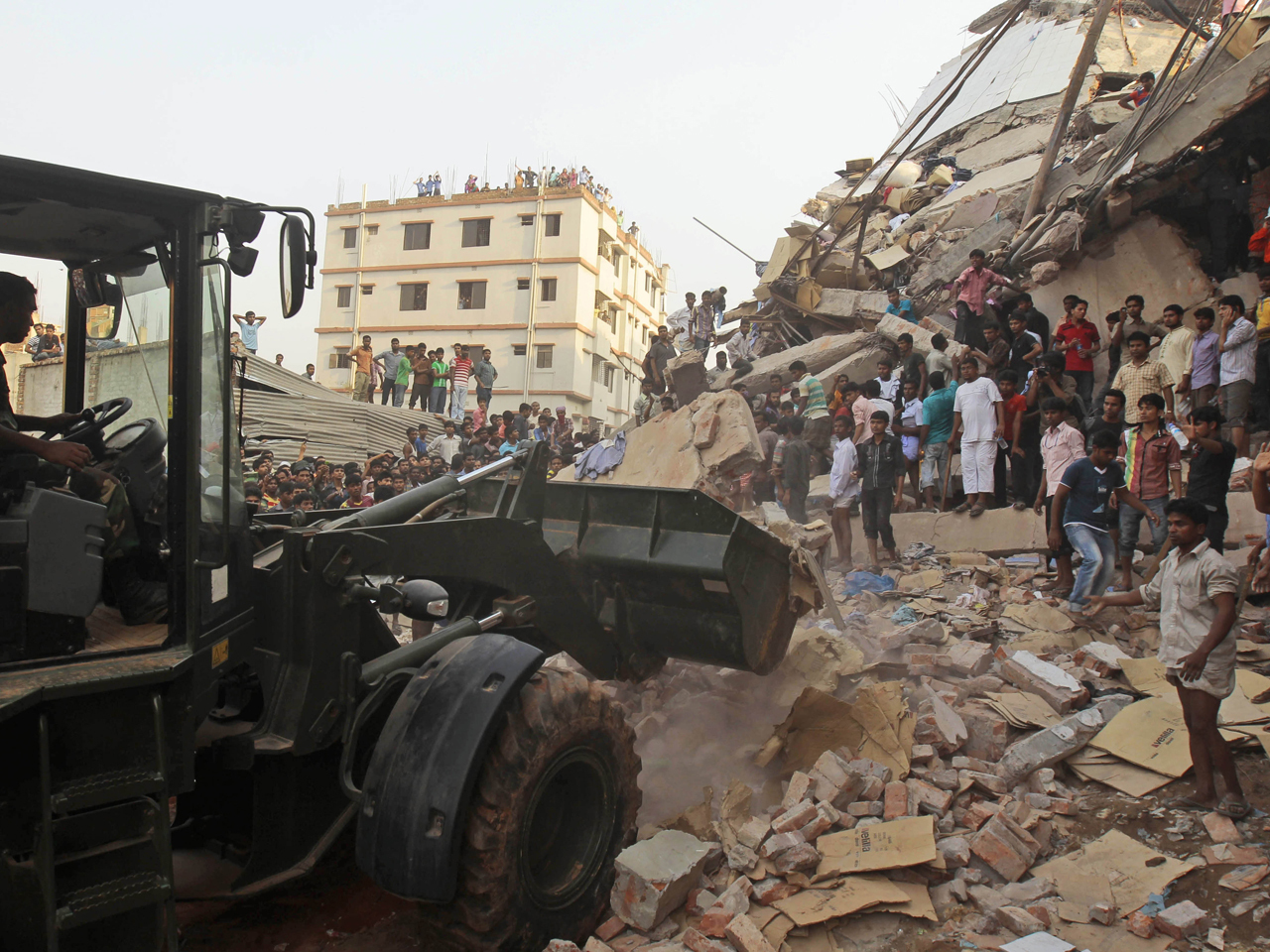 SAVAR, Bangladesh A government minister says the death toll in a factory building collapse in Bangladesh has reached 161 as rescue workers continue to hunt for more survivors and victims.

The junior minister for Home Affairs, Shamsul Haque, says that, by late Thursday morning, a total of 2,000 people had been rescued from the wreckage of the building.

Wednesday's accident has reignited questions about the often lethal conditions in the country's garment industry.

Army Brig. Gen. Mohammed Siddiqul Alam Shikder said many people are still trapped. The building housed a number of garment factories employing hundreds of people when it came tumbling down Wednesday morning. A clearer picture of the rescue operation would be available by afternoon, he said.

The disaster came less than five months after a factory fire killed 112 people and underscored the unsafe conditions faced by Bangladesh's garment workers, who produce clothes for global brands worn around the world. Workers said they had hesitated to enter the building on Wednesday morning because it had developed such large cracks a day earlier that it even drew the attention of local news channels. Just hours later it came tumbling down.

Searchers worked through the night to cut holes in the jumbled mess of concrete with drills or their bare hands, passing water and flashlights to those pinned inside the building.

"I gave them whistles, water, torchlights. I heard them cry. We can't leave them behind this way," said fire official Abul Khayer.

Abdur Rahim, who worked on the fifth floor, said a factory manager gave assurances that the cracks in the building were no cause for concern, so employees went inside.

"After about an hour or so, the building collapsed suddenly," Rahim said. He next remembered regaining consciousness outside.

On a visit to the site, Home Minister Muhiuddin Khan Alamgir told reporters the building had violated construction codes and "the culprits would be punished."

Abdul Halim, an official with the engineering department in the Dhaka suburb of Savar, said the owner was originally allowed to construct a five-story building but he added another three stories illegally.

"Our deepest sympathies go out to the victims of this terrible tragedy and their families," Singer said in a statement.

Dress Barn said that to its knowledge, it had "not purchased any clothing from that facility since 2010. We work with suppliers around the world to manufacture our clothing, and have a supply chain transparency program to protect the rights of workers and their safety."

Primark, a major British clothing retailer, confirmed that one of the suppliers it uses to produce some of its goods was located on the second floor of the building.

In a statement emailed to The Associated Press, Primark said it was "shocked and deeply saddened by the appalling incident." It added that it has been working with other retailers to review the country's approach to factory standards and will now push for this review to include building integrity.

Meanwhile, Primark's ethical trade team is working to collect information, assess which communities the workers come from, and to provide support "where possible."

John Howe, Cato's chief financial officer and executive vice president, told The Associated Press that it didn't contract with any of the factories directly but it's currently investigating what its "ties" were.

Howe said that one of Cato's domestic importers could have used one of the factories to fulfill some of the orders the retailer had placed. It's expected to have more information by Thursday.

Spanish retailer Mango denied reports it was using any of the suppliers in the building. However, in an email statement to the AP, it said that there had been conversations with one of them to produce a batch of test products.

Kevin Gardner, a spokesman at Wal-Mart Stores, Inc., the second-largest clothing producer in Bangladesh, said the company is investigating to see if a factory in the building was currently producing for the chain.

"We remain committed and are actively engaged in promoting stronger safety measures, and that work continues," Gardner added.

Workers said they didn't know what specific clothing brands were being produced in the building because labels are attached after the products are finished.

Charles Kernaghan, executive director of the Institute for Global Labour and Human Rights, which has an office in nearby Dhaka, says his staff is investigating the situation. He's hoping his team, working with local workers' groups, will be able to find out which brands were having their products made at the time of the collapse.

"You can't trust many buildings in Bangladesh," Kernaghan said. "It's so corrupt that you can buy off anybody and there won't be any retribution."

Sumi, a 25-year-old worker who goes by one name, said she was sewing jeans on the fifth floor with at least 400 others when the building fell.

"It collapsed all of a sudden," she said. "No shaking, no indication. It just collapsed on us."

She said she managed to reach a hole in the building where rescuers pulled her out.

Tens of thousands of people gathered at the site, weeping and searching for family members. Firefighters and soldiers with drilling machines and cranes worked with volunteers to search for survivors.

An enormous section of the concrete structure appeared to have splintered like twigs. Colorful sheets of fabric were tied to upper floors so those inside could climb or slide down and escape.

Rescuers carried the body of a young boy from the building, but it was not immediately clear what he had been doing inside. The building housed a bank and various shops in addition to the garment factories.

An arm jutted out of one section of the rubble. A lifeless woman covered in dust could be seen in another.

Rahim said his mother and father, who worked with him in the factory, were trapped inside.

Mosammat Khurshida wailed as she looked for her husband. "He came to work in the morning. I can't find him," she said. "I don't know where he is. He does not pick up his phone."

Asaduzzaman, the local police chief, said nearly 100 bodies had been handed to their families as of Thursday morning.

The November fire at the Tazreen garment factory drew international attention to working conditions in Bangladesh's $20 billion-a-year textile industry. The country has about 4,000 garment factories and exports clothes to leading Western retailers. The industry wields vast power in the South Asian nation.

Tazreen lacked emergency exits, and its owner said only three floors of the eight-story building were legally built. Surviving employees said gates had been locked and managers had told them to go back to work after the fire alarm went off.