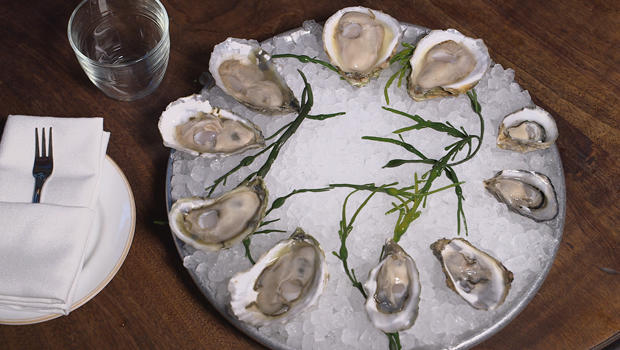 "Aw, shucks!" is one possible response to the offer of a serving of oysters. Long-time oyster fans love 'em, of course. Oyster novices aren't quite so sure. With Faith Salie we're off on an oyster adventure:

Ask Chef Sandy Ingber what's on the menu at the Grand Central Oyster Bar in New York City and you may be there for a while:

"I started in 1990, and for about the first seven or eight years [it was] very difficult to buy a lot of different varieties of oysters," Ingber said. "There just weren't any around."

In case you didn't know, we are in something of an oyster renaissance. Walk into a restaurant like Brooklyn's Maison Premiere, and you can find oysters from hundreds of different places across the country and beyond.

Now if you think all this oyster slurping is nothing but a fad, consider these thoughts from Rowan Jacobsen, author of "The Essential Oyster" (Bloomsbury).

"When you pick up an oyster, you're kind of reliving this very early experience of humanity: eating a raw animal live out of its shell," he said. " An oyster, it's live up to the moment you shuck it. And after you shuck it, it's unclear how dead it is, right? So you're doing something that is definitely not a part of normal civilized life.

"And there is an intensity to that experience. It's just like, one-on-one, you and the oyster. And usually you win!  But occasionally the oyster wins and you never know, right? So it really is a rush, like an adrenaline boost when you eat an oyster."

And as more and more Americans experience that rush, oystermen (and women) can't keep up with demand.

And prices are higher than ever.

But today's story of the North American oyster doesn't begin in fancy restaurants or in the depths of the oceans, but where the water meets the land … at America's oyster farms.

Skip Bennett has been raising oysters in the brackish waters of Duxbury Bay across from Massachusetts' Cape Cod for 20 years, steadily adding new farms to keep up with demand.

"Since 1995, how much has your business grown?" Salie asked.

"It's grown, probably on average, about 40% annually," Bennett replied.

He and his team raise the oysters in their hatchery, then move them to several different "farms" in the bay and nearby creek, because it turns out with oysters -- not unlike wine -- geography matters. The taste of an oyster depends on where it's grown.

"In oyster farming, it's the salinity and the type of plankton or food that's in the water, and the chemistry of the water" that affects flavor, said Bennett.

And oyster farmers never have to feed their livestock. These bivalves consume algae and plankton. They're in effect tiny water filters, and so good at it that these oysters can turn murky water clear.

Incredibly, a single oyster can filter 20-50 gallons of water a day.

They are, said Jacobsen, "the greenest critter in the ocean. It's almost miraculous.  You just put little baby ones in the water, wait two years, you take out big ones. Good to go."

"They seem like they should be the food of the future," said Salie.

"Yeah. And you're not the first person to say that.  A lot of people are looking at oysters and clams and mussels as a really potentially huge source of food for the future."

You might be surprised to learn that we wouldn't even have this bounty of bivalves were it not for the Clean Water Act of 1972.

Bill Taylor, whose family has been raising oysters around Shelton, Washington since the 19th century, said, "The waters in the Northwest, particularly Puget Sound area, are quite a bit cleaner than when I grew up. There was a pulp mill that was still functioning when I was born in the mid-'50s. It functioned for 30 years, and basically the waters here were a dead zone. There wasn't much that grew here."

Today, just across the bay from the town's closed pulp mill, oystermen work at low tide to harvest Kumamoto oysters, a species native to Japan.

"We sell around 35 million oysters live each year," Taylor said.

That's a lot of oysters!

And this is probably the right time to confess that -- until shooting this story -- your correspondent had never tasted a single one.

"Well, as long as they're willing to just give it a try, then you talk to them about the flavor," he said. "And to me, it's kind of like the smell of the beach. So if you've ever been at the beach for the whole day and especially in the afternoon when it starts to cool down, the beach smells really sweet and salty, and you can smell the air."

Salie came and smelled the air … and tasted her first oyster.

"Yeah, baby steps, yeah, we're gonna work you into this."