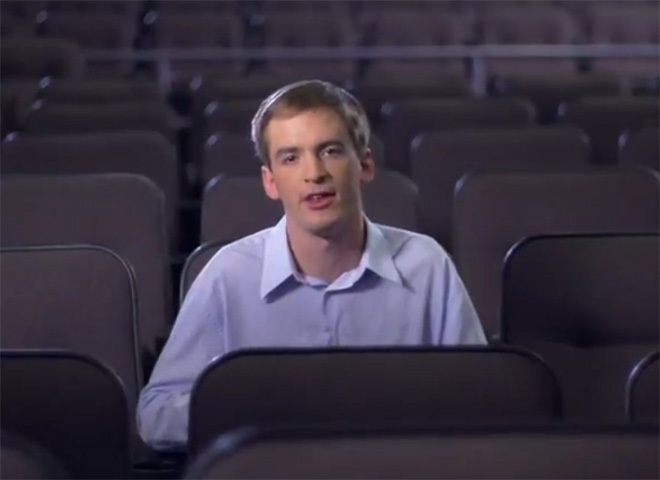 DENVER A man wounded in the shootings at a suburban Denver movie theater is appearing in a television ad aimed at getting voters' and candidates' attention before the first presidential debate — and to shed some light on gun violence.

Stephen Barton, a 22-year-old from Southbury, Conn., was among the 58 people injured in the July 20 attack in Aurora that also left 12 people dead.

In a 30-second spot that television viewers will see nationwide beginning Monday, Barton urges people to ask themselves during the debates which candidate has a plan to stop gun violence.

Filmed inside an empty movie theater, Barton talks about his experience during the shooting as photos of jagged gunshot wounds to his face and neck are shown.

"I was lucky. In the next four years, 48,000 Americans won't be so lucky, because they'll be murdered with guns in the next president's term, enough to fill over 200 theaters," Barton says in the ad.

The ad is part of the "Demand A Plan" campaign led by shooting survivors and Mayors Against Illegal Guns, a bipartisan group of more than 725 mayors who advocate closing what they say are loopholes in laws designed to prevent felons, domestic violence offenders, the seriously mentally ill and other dangerous people from obtaining firearms.

"Especially now, given what's happened in the past few months with guns and these mass shootings, I don't think there is a better opportunity to talk about this," Barton said in an interview with The Associated Press.

President Barack Obama and Republican challenger Mitt Romney, who will debate at the University of Denver, have been largely quiet about guns during the campaign, except when prodded by high-profile cases like the Colorado theater shooting.

Mr. Obama has supported a renewed ban on assault-type weapons, and he blames Congress for opposing such measures. The president also has signed laws allowing people to carry concealed weapons in national parks and in checked bags on Amtrak trains.

Meanwhile, Romney says he doesn't think the country needs new gun laws, but tougher enforcement of those already on the books.

The key, he said, is to identify deranged or distressed people and then "keep them from carrying out terrible acts."

Barton said it's "extremely frustrating" that the candidates have shied away from gun policy, and he hopes the new ad will at least start a conversation about gun violence and how to stop it.

"At some point we have to demand a certain level of courage and independence among politicians. At some point you just have to expect more, even in an election season," he said. "It's really just a very basic request that both candidates start talking about this, that they take the situation seriously."

Barton's ad, which does not endorse either Obama or Romney, says it was paid for by United Against Illegal Guns Support Fund, the fundraising arm for Mayors Against Illegal Guns. Barton, who was bicycling across the country and staying with a friend in Aurora the night of the shooting, now does victim outreach and policy research for the mayoral group.