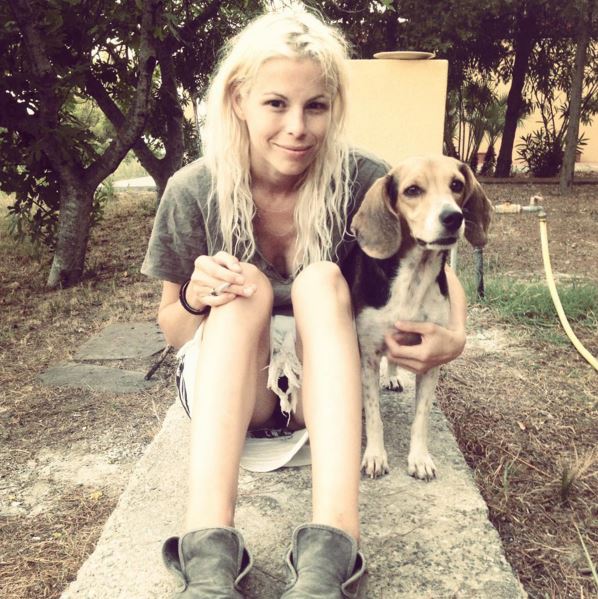 Authorities questioned Olsen's boyfriend, a local artist, Saturday but said they have no suspects so far.

"What happened in Florence is getting the maximum attention to find out what it's all about," Italy's police chief, Alessandro Pansa, said during an unrelated visit Sunday to Florence, the ANSA news agency reported.

Meanwhile, friends and fellow expats expressed horror at the slaying of a woman known around Florence for her beloved beagle, Scout, and said they hoped her killer would be found quickly.

Flowers were left at her doorstep.

"I can't imagine a person who would hurt her. She is a gentle, a kind, a beautiful, friendly, lovely girl and it's an awful shock," Amy, a friend who only gave her first name, told The Associated Press in Florence. "We've got a great community here of people and everyone loved her."

In at least two Instagram posts from Italy on her account, Olsen uses the hashtag "#creeper," although it's not clear to what she is referring to exactly.

Olsen grew up in Summer Haven, Fla, near Jacksonville, reports CBS affiliate WTEV, and was a big part of the community, according to friends.

She enjoyed surfing and had many friends in the area.

"Ashley Olsen had an infectious personality and a smile that could light up a room. We met when I was just thirteen and it was like I had known her my whole life already," said Kate Linser Smith.

She described Olsen as a brave woman who walked her own path.

"Ashley lived life like it was an adventure. She loved art, music and especially fashion and was a notorious trend setter amongst our group of friends," said Smith. "Ashley was loving, kind and formed unbreakable friendships with all who were lucky to have known her. My heart goes out to her family during this terrible time of grief. Ashley Olsen's candle burned bright and the world is a bit dimmer now without her in it."

Friends and other expats expressed hope that the case wouldn't end up repeating the flawed, flip-flopping investigation into the last high-profile murder case of a foreigner living in Italy, that of Meredith Kercher.

The British student was studying in the Umbrian city of Perugia when she was found dead in 2007. Knox, Kercher's American roommate, and her then-boyfriend were at first convicted of the murder, then acquitted, convicted again on appeal and finally acquitted for good when Italy's supreme court last year definitively exonerated them. Another man was convicted and is serving a 16-year sentence.

"I would hope for her sake that this investigation is more clear," said Georgette Jupe, who writes the "Girl in Florence" blog and knew Olsen casually, primarily because they both had beagles and lived near one another in Florence's Santo Spirito neighborhood.

Social media groups for expats in Florence expressed the same sentiment, with several people posting comments about the parallel to the Kercher investigation, which was harshly criticized in both the American and British media.

"It reignites the concern of justice, different policing and judicial systems, and the different journalism styles between Italy and the U.S.," Beth Prusiecki, an American living in Milan, told the AP in a message after posting on one of the closed Facebook groups.

Jupe said Olsen was involved in fashion and had moved a few years ago to Florence, where her father was also a professor.

Olsen's Facebook page is full of photos of her and Scout, including on the steps of the Santo Spirito church on the lovely piazza of the same name that is the heart of the "Oltrarno" neighborhood of the Tuscan city.

"She always with her dog, always sitting on steps of Santo Spirito with friends," Jupe said in a phone interview.

Alexandra Lawrence, a 17-year resident of Florence, said the art-filled city has long drawn creative people like Olsen, who find a ready-made expat community that is far more active and close-knit than ones in Rome or Milan.

"I think maybe because it's such a small city, but because there are so many expats, we all eventually come across each other and run in similar circles," said Lawrence, who teaches art history to American students on study abroad programs and gives tours.

She said she didn't know Olsen personally, but said the first thing she thought of when she heard the news was the Knox saga.

"We've been through this terribly unresolved mystery with Amanda Knox," she said in an interview. "You never want it to get to that point."