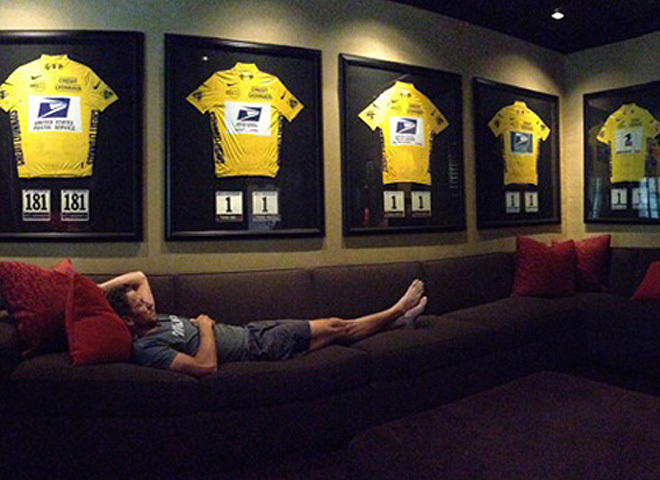 Lance Armstrong may have been officially stripped of his record seven Tour de France titles, but if his own photo is to be believed, he still celebrates them.

The disgraced former cyclist tweeted a photo of himself apparently lying on a couch in his Austin home that had a wide-enough panoramic view to take in displays of all seven yellow jerseys he won consecutively from 1999 to 2005. The caption of the photo was simply: "Back in Austin and just layin' around..."

Armstrong has continued to deny doping allegations, even after a scathing U.S. Anti-Doping Agency report (pdf) released in early October that accused him of leading a massive doping program on his teams. Following the report, cycling's international governing body, Union Cycliste Internationale (UCI), stripped him of his titles.

Additionally, all of Armstrong's major sponsors -- from Nike to Anheuser-Busch -- have abandoned the superstar athlete, and he stepped down as the head of his well-known cancer charity, Livestrong. On top of that, the International Olympic Committee is still considering whether Armstrong can keep the bronze medal he won at the 2000 Sydney Games.

Armstrong has spoken very little publicly about cycling and the doping scandal since the USADA report. At the 15th anniversary of Livestrong after the report's release, he said: "It's been an interesting couple of weeks. It's been a difficult couple of weeks for me and my family, my friends and this foundation."

Even a month later, it appears his woes are far from behind him.

UCI still faces accusations it helped cover up Armstrong's doping and that it unethically accepted donations totaling $125,000 from him. Last week, it turned to the Court of Arbitration for Sport for help choosing a team to investigate the governing body's links to the Armstrong doping case.

Additionally, yet another former Armstrong teammate David George will have the opportunity to reveal how and when he took the blood-boosting drug EPO and if he used it while racing with the Texan more than a decade ago.

While the testimony of several former Armstrong teammates make up the backbone of the USADA report, more testimony from George could add to the credibility of the accusations against Armstrong.

George admitted using EPO last week, shortly after the announcement of a positive test by the South African Institute for Drug-Free Sport. He was provisionally suspended by Cycling South Africa for failing an out-of-competition test on Aug. 29 and faces a two-year ban, pending a hearing.