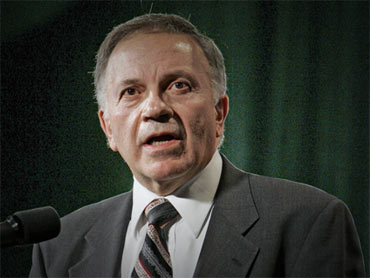 (AP)
The Tea Party convention kicked off last night with an explosive speech from former Republican Rep. Tom Tancredo, who lambasted "the cult of multiculturalism" in the U.S.

Tancredo, at left, also called President Obama a "socialist ideologue," who was elected because "we do not have a civics, literacy test before people can vote in this country," according to ABC News.

"People who could not spell the word vote or say it in English put a committed socialist ideologue in the White House -- name is Barack Hussein Obama," he said, Fox News reports.

Tancredo Talks to CBS About Speech

Tancredo, who ran for the Republican presidential nomination in 2008 mainly on a platform opposing illegal immigration, also bashed Sen. John McCain in his remarks.

"Thank God John McCain lost the election," he said, according to ABC, saying that McCain would have been a repeat of "Bush 1 and Bush 2."

Fox adds that Tancredo said the Tea Party movement was a "counter-revolution" to stop the country's move toward the left.

"The race for America is on right now," he said.

The convention continues today and tomorrow with workshops and seminars on grassroots organizing. Former Alaska Governor and 2008 Republican vice presidential nominee Sarah Palin will be the convention's keynote speaker on Saturday night.