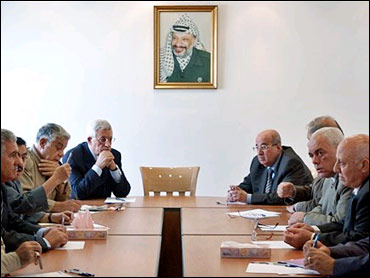 Yasser Arafat is in a "reversible coma" but not brain dead, his spokeswoman said Friday amid conflicting reports about the 75-year-old Palestinian leader's condition.

"I can assure you that there is no brain death," Leila Shahid, the Palestinian envoy to France, told French RTL radio. "He is in a coma. We don't know the type but it's a reversible coma."

She denied "categorically" reports in French and Israeli media that he is brain dead and being kept alive on life support at the Percy Military Hospital in Clamart, France, where he has been since last week.

Shahid suggested the coma occurred after he was put under anesthesia to have medical tests, including an endoscopy and a biopsy of the spinal cord.

"The doctors don't have a diagnosis," she said. "All vital organs are functioning... he could or could not wake up."

Shahid spoke shortly after an Israeli Cabinet minister told Israel's Channel Two television Friday that Arafat is brain dead and being "artificially" kept alive. "They will need to decide when to stop it," said Justice Minister Yosef Lapid.

The drama over Arafat's still unexplained medical condition heightened Thursday as reports - later denied, and called a "misunderstanding" - surfaced that he was dead, or brain dead.

Arafat's personal physician, Dr. Ashraf Kurdi, said then that a brain scan showed Arafat had not suffered a hemorrhage or stroke, and "has no type of brain death."

As the medical struggle continues, both Israeli and Palestinian government officials have been holding emergency meetings prompted by Arafat's deteriorating condition.

On the West Bank, leaders of Arafat's Fatah party met in Ramallah Thursday to adopt a temporary plan for the Palestinian government and consider what to do next if Arafat does not recover.

Palestinian Prime Minister Ahmed Qureia assumed some of Arafat's financial powers and his predecessor, Mahmoud Abbas, was reportedly chosen to temporarily handle some of Arafat's other duties.

That's according to the Washington Post, which says Qureia will head up the National Security Council and the Palestinian Authority, the self-governing body in the West Bank and the Gaza Strip.

Abbas will lead both Fatah and the Palestine Liberation Organization - which aims to represent Palestinians living in the West Bank, Gaza and abroad.

A Palestinian officials says Qureia will make the rounds on the Gaza Strip Friday, ordering security chiefs there to show solidarity and avoid infighting during this difficult time.

Other Fatah leaders are also hammering home the message.

"We are telling Palestinians with special political agendas 'This is not your chance to take over,'" said Fatah activist Jamal al-Tirawi, speaking in Ramallah, surrounded by armed members of the al-Aqsa Martyrs Brigade - a Palestinian group affiliated with Fatah and linked to numerous suicide bombings.

For many Palestinians, a future without Arafat is hard to imagine, and well-wishers have been holding a vigil outside the hospital.

"It tears your heart up," said Mahmod Nimr, 36, an unemployed Palestinian standing by the main gate of the hospital. "I can't see someone taking his place."

A prolonged Arafat incapacitation - or death - could have a profound impact on the Middle East. There are fears of unrest among Palestinian factions and renewed chaos in the West Bank and Gaza could make any cooperation with Israel even more difficult.

The Israeli army, which is on high alert, has a plan to deal with the fallout from Arafat's death, including possible Palestinian riots.

The Israeli military had not yet moved forces to anticipated problem areas, but commanders have been told to be on standby.

Among Israel's plans are ways to prevent Arafat from being buried in Jerusalem. Israeli Prime Minister Ariel Sharon has said he would not permit Arafat to be buried in the city, claimed by both Israel and the Palestinians as their capital.

Israeli Army chiefs are opposed to Arafat's burial in Jerusalem - which the Palestinians say should be their capital - or the nearby suburb of Abu Dis, on the West Bank. Arafat's family has a plot in the Gaza Strip.