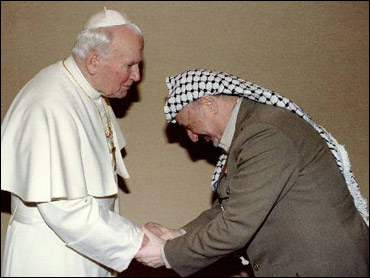 Yasser Arafat's latest health crisis — a severe flu, gallstones, a battery of cancer tests — has exposed how unprepared the Palestinians are for their leader's death, making a chaotic transition period all but inevitable.

Arafat, 75 and noticeably weakened after more than two years of confinement to a dank compound, still refuses to groom a successor; rival security chiefs are already battling each other in the streets.

No leader of Arafat's stature and popularity is waiting in the wings, said Palestinian legislator Hanan Ashrawi. "It's only natural to expect that there would be either a power struggle or there would be a loss of cohesion," she said.

Analysts said it could take years for a leader to emerge, hurting prospects for an Israeli-Palestinian peace deal.

Even with Arafat still alive, chaos has gripped much of the West Bank and Gaza Strip. Gunmen routinely commandeer government offices or hold employees hostage to demand jobs or housing. In recent months, security agents loyal to Gaza strongman Mohammed Dahlan, who has presidential ambitions, have clashed with supporters of another security chief, Arafat relative Moussa Arafat.

Without Arafat's unifying presence, simmering political rivalries would likely explode. In his Fatah movement, the old guard — Arafat contemporaries who returned with him from exile in the 1990s — is trying to keep out younger activists who remained in the West Bank and Gaza, fought Israel in two uprisings and now demand to be rewarded with political power.

Fatah also faces stiff competition from the militant Hamas group, which hopes to capitalize on massive frustration with Arafat's corrupt government during local elections in December.

On paper, at least, a path of succession has been charted.

The parliament speaker would replace Arafat as Palestinian Authority president for 60 days, until elections are held.

However, current speaker Rauhi Fattouh is a bland backbencher uncertain to hold on during a turbulent transition period and timely elections appear unlikely.

Arafat's other post, as PLO chief, would be filled, at least temporarily, by his deputy in the organization, Mahmoud Abbas, a former prime minister who resigned last year after power struggles with Arafat.

Barry Rubin, an Israeli biographer of Arafat, predicts it would take several years before a real leader emerges. "As long as the battle goes on, no one can make decisions, especially moderate or compromise decisions," Rubin said. "This means the chances of a negotiated peace are close to zero."

Israel and the United States, however, hold out hope that a post-Arafat Middle East will be more conducive to peace because of what they say is Arafat's blind eye to terror and opposition to reform.

The autocratic Arafat has refused to anoint a successor, for fear an impatient protege would try to topple him. He has also alienated many of his peers.

Abbas has not spoken to his old comrade for more than a year. Only Arafat's deteriorating health persuaded the former premier to make a bedside visit to the Palestinian leader in his Ramallah headquarters Monday.

At the time, Arafat was undergoing tests, including X-rays and ultrasound in his makeshift clinic at the compound. Doctors later said the tests found no evidence that Arafat has cancer, as some have speculated, but detected a large gallstone.

Late Wednesday, a team of doctors returned to Arafat's compound after his condition deteriorated, an official in Arafat's office said. He did not provide details, but said Palestinian Prime Minister Ahmed Qureia and Abbas were also summoned to the compound to meet with Arafat.

Qureia is also given little chance of taking the reins, even in a transitional government. Qureia, a former parliament speaker, lost much of his prestige with his new job.

Polls show the second most popular Palestinian after Arafat is Marwan Barghouti, a leader of Fatah's young guard. But Barghouti is serving five consecutive life terms in an Israeli prison for involvement in deadly shooting attacks.

There's no guarantee that Barghouti, who supports a two-state solution, would get parole, even though it might be in Israel's interest. A poll by Bir Zeit University in the West Bank indicates Barghouti would easily defeat a Hamas candidate in presidential elections.

For now, Arafat remains the undisputed leader, and would easily win if presidential elections were held in his lifetime. Many Palestinians are upset with his rule, but still defer to him as the last guarantor of unity and a symbol of statehood dreams. No one has demanded he step aside on medical grounds.

Even in private conversations, Arafat's confidants don't like to discuss the possibility of his death, in part because they fear word might leak and Arafat would accuse them of plotting his overthrow. Something as basic as funeral arrangements have not been discussed.

Cloistered in his compound, Arafat is stubbornly grooming an image as a martyr for the Palestinian cause, at the expense of his health.

Citing concern about renewed Israeli raids, he insists on sleeping in a cramped room, a former filing area adjacent to his office. He believes his old, airy bedroom, which was destroyed by Israeli troops, but has been rebuilt, is too exposed.

"There was a window in his office, but he blocked it with metal plates," said Azzam Ahmed, the communications minister.

Fueling the myth, the former guerrilla leader sleeps with an assault rifle by his side, and says he'd rather go down fighting than die in his sleep.