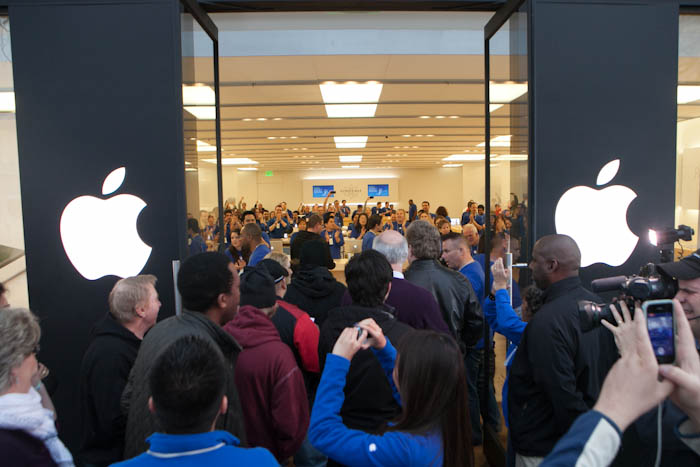 (MoneyWatch) Although the new iPad went on sale worldwide Friday to the usual long lines, more important to Apple's (AAPL) financial results and stock price is what the tablet means for an update to the iPhone, the company's real cash cow.

Yes, the latest version of the iPad, with its high-resolution display and high-speed cellular access, is expected to be a hit and help boost Apple's top and bottom lines, analysts say. But the company is more than twice as dependent on iPhone sales to drive revenue growth.

The retail supply of the new iPad, which launched in the U.S. and nine other countries, will very likely be sold out by the close of this weekend, says Daniel Ernst, of Hudson Square Research. "We note Apple is currently quoting a two- to three-week delivery time for online orders of the device," Ernst writes in a new report to clients.

By comparison, Apple sold a total of 55.3 million iPads for all 2011, easily dominating the burgeoning tablet industry. Of all the tablets shipped in 2012, 63 percent were iPads, according to Canaccord Genuity. Only Amazon.com's (AMZN) Kindle Fire and Android-based tablets from Samsung managed to grab at least 5 percent market share.

More important is what the new iPad should mean for the iPhone. Analysts expect Apple to launch an updated version of the iPhone this fall that, like the new iPad, will run on faster 4G cellular networks.

A big drawback to 4G phones is that the faster network seriously impairs battery performance. But the new iPad boasts the same long-lived power supply as earlier models, suggesting Apple has cleared that technological hurdle.

The new iPad makes it highly likely that the next iPhone will run on the faster LTE 4G network, notes Guggenheim analyst Shin Ying. "Apple claims the 4G iPad has the same battery life as the 3G iPad, while being only fractionally thicker (and incorporating a more powerful processor)," Ying writes in a recent note to clients. "This suggests Apple and its component suppliers have made meaningful advances in power efficiency over the past year. Apple has said before that battery life was one key barrier to its including LTE in the iPhone 4S."

The launch of a 4G iPhone later this year -- perhaps the elusive iPhone 5 -- would be more material to Apple's stock than the new iPad, if only because the iPhone represents a far larger chunk of the company's business.

Apple sold 37 million iPhones in its record-smashing fourth quarter of last year, compared with 15 million iPads. For all of 2011, the iPhone brought in $47 billion in revenue against $20 billion for the iPad, and this year is forecast to bring much of the same. FBN analyst Shebly Seyrafi expects iPhone revenue in fiscal 2012 to hit $82 billion, versus $32 billion for iPad.

The iPad may be a game changer in the new tablet category, but the real upside in Apple's results -- and stock price -- still lies with the iPhone.