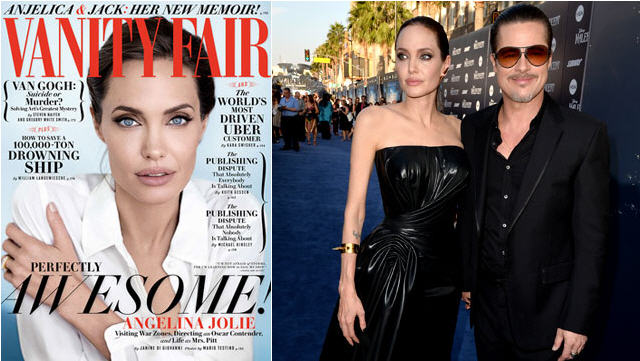 Newlywed Angelina Jolie has never looked better on the cover of Vanity Fair magazine, and it just may be due to her recent "I dos" to Brad Pitt.

Though Pitt and Jolie already have six kids and have been together since 2006, the actress still admits of being a wife, "It does feel different."

She adds, "It feels nice to be husband and wife."

Sharing a bit about their wedding, Jolie recalls to VF contributing editor Janine di Giovanni the vows that her children wrote for her and Pitt. "They did not expect us never to fight, but they made us promise to always say, 'Sorry,' if we do," she explains. "So they said, 'Do you?,' and we said, 'We do!'"

Now that they're married, Pitt and Jolie are gearing up to the return to the big screen together, a first since their 2005 film, "Mr. and Mrs. Smith." Jolie directs and stars alongside Pitt in "By the Sea," and she confesses jokingly, "A few friends asked if we were crazy. [A film about] a married couple going through some difficulties ...and I'm directing him."

When Jolie isn't caring for her family or being a major movie star, she's working on making the world a better place. But given all her charitable efforts around the globe, would she ever consider running for a political office? "I am open," Jolie admits.

"When you work as a humanitarian, you are conscious that politics have to be considered," she tells di Giovanni. "Because if you really want to make an extreme change, then you have a responsibility."

For more on Jolie's marriage to Pitt -- and her wedding dress -- check out the video here.