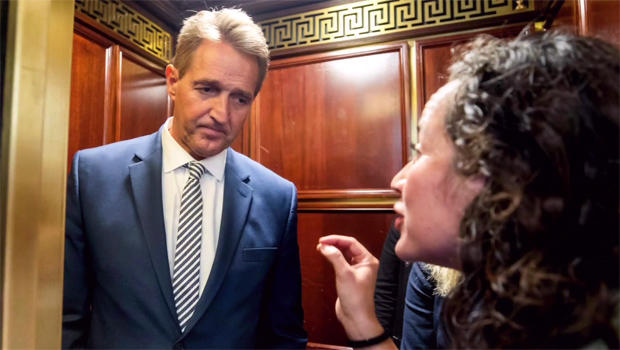 The woman who confronted Republican Sen. Jeff Flake of Arizona in an elevator Friday about his upcoming vote for Supreme Court nominee Brett Kavanaugh said the senator's decision to force a new investigation into the judge's past showed that "people who have the responsibility of making decisions for our country can actually listen to their conscience."

Ana Maria Archila told "CBS This Morning" Monday that in the interaction, which went viral on Friday, she and the senator were able to establish a human connection: "I connected to him because he's a father, I am a mother. This is not just about us today, not just about the politics of this moment; this is about the lives of the people we love so much."

An activist and co-executive director of the Center for Popular Democracy, a liberal advocacy group based in New York City, Archila said that she had been going to Washington, D.C., for weeks trying to talk to members of the Senate about her concerns over placing Kavanaugh on the Supreme Court – even before the allegations of sexual assault arose. "I think that he stands for the rollback of decades of progress for women's rights, for communities of color, for workers, for immigrants," she said.

"I was doing the work of making my voice heard, bringing others to make sure that the decision was informed by the appearances of people who stood to lose so much."

It was on Friday that she met the other woman in the video, Maria Gallagher, a recent college graduate from Virginia who had never talked with an elected official before. Together they decided to go to Sen. Flake's office, and it was then that they saw the statement of support for Kavanaugh that Flake released.

"So, when we saw him, we were having all these reactions of, how can you do this? We just heard a woman yesterday, Dr. Christine Blasey Ford, pour her heart out and tell about attacks to protect our country. I stood in front of his office and told my story to protect my children and the country they're growing up in."

The two women confronted Flake in an elevator, telling him of their experiences with sexual assault: "Look at me when I'm talking to you: you're telling me that my assault doesn't matter!" one woman said.

Video of that confrontation went viral – and Flake later moved the nomination forward on the condition that the FBI would reopen its background investigation of Kavanaugh, taking into account the recently-surfaced charges by Ford and others into alleged sexual assaults. Kavanaugh has denied all the allegations.

Co-host-Norah O'Donnell asked Archila, "When that elevator door closed with Senator Flake, did you think that history might change?"

"I did not think that," Archila replied. "I thought that the interaction that we had just had had touched him and that it had connected with a seed of perhaps doubt, and a sense of responsibility, that I was hoping he would seek in this moment of making such a consequential decision for our country."

Co-host Gayle King asked Archila, "Are you encouraged by an FBI investigation?"

"I think the investigation is one important step," Archila replied. "The country deserves a process that all of us can trust. I think that we have seen Brett Kavanaugh enough. I believe that we need to have people in the Supreme Court who are able to model what it looks like to take responsibility for your own actions and what it looks like to begin the repair process of whatever harm has been caused, and I think he's unable to do that."

Gallagher had never publicly told her story of sexual assault, and had not even told her own mother. Likewise, Archila had only spoken publicly of her experience a few days earlier, not even telling her father.

Archila was asked to comment on a report this morning that Rachel MItchell, the Arizona sex crimes prosecutor brought in by Republican members of the Senate Judiciary Committee to interview Dr. Ford, describes Ford's experience as a "he said, she said" case that prosecutors would likely not pursue due to lack of corroborating evidence and doubts about her testimony.

"The reason why there are thousands and thousands of women telling their stories right now, and survivors telling their stories right now, is because we recognize in Dr. Ford's testimony our own reality, our own experiences, [and] that the reason why we don't tell is because we're not believed," she replied. "The reason why we don't tell is because we want to protect the people we love from having to hold the pain of, perhaps, not feeling guilty about not being able to protect us. So if you ask me what was the date of when it happened to me, I couldn't tell you, but I can remember, and I know that that experience was mine, and I see that in Dr. Ford."

"And that's why you said you didn't want to tell your father, because you didn't want him to hold the pain of not being able to protect you?" asked co-host John Dickerson.

Inside the model shop behind Bin Laden raid