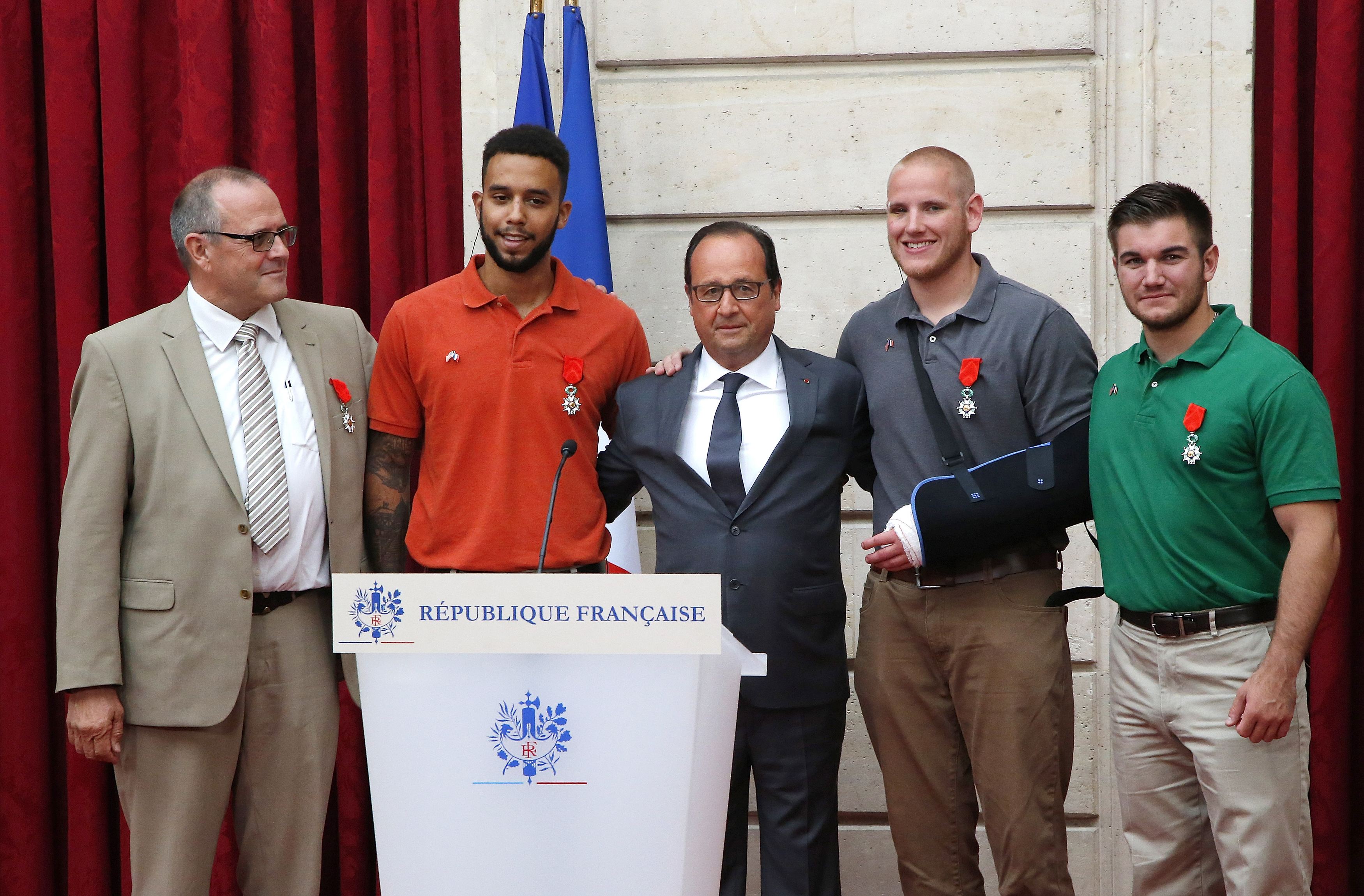 PARIS -- French President Francois Hollande presented three young Americans with the prestigious Legion of Honor on Monday for their quick reaction to an attack on a train that likely saved many lives.

The three Americans -- two service men and a civilian -- plus a Briton and a Frenchman helped overpower a lone gunman on an Amsterdam to Paris high-speed train Friday.

It was the Frenchman who first came across the Moroccan gunman near a train bathroom before U.S. Airman Spencer Stone, National Guardsman Alek Skarlatos and Anthony Sadler subdued him.

The British man joined to help tie up the assailant.

The three American travelers said over the weekend that they relied on gut instinct and a close bond forged over years of friendship as they took down the heavily armed attacker on the train speeding through Belgium.

They arrived together for the award ceremony Monday in Paris, stepping out of a dark SUV and posing briefly for a photo before walking into the Presidential Palace.

CBS News correspondent Charlie D'Agata said as the three young men arrived at the palace in polo shirts, he was reminded that just three days earlier they were on vacation -- and Monday the French president was personally lauding them, saying the whole world "admires their courage and cool composure."

After giving remarks, Hollande personally pinned the Legion of Honor medal -- France's highest honor -- on each of the Americans and the Briton in turn.

Stone, recounting for the first time on Sunday how a likely catastrophe was averted two days earlier, said the gunman, an assault rifle strapped to his bare chest, seemed like he was "ready to fight to the end." But he added, "So were we."

Without a note of bravado but a huge dose of humility, the three described Friday's drama on an Amsterdam-to-Paris fast train.

His arm in a sling, Stone, 23, said he was coming out of a deep sleep when the gunman appeared.

One of his friends, Skarlatos, a 22-year-old National Guardsman recently back from Afghanistan, "just hit me on the shoulder and said 'Let's go.'"

The gunman, identified as 26-year-old Moroccan Ayoub El-Khazzani, was in custody and being questioned by French counterterrorism police outside Paris. French and Spanish authorities have said El-Khazzani is an Islamic extremist who may have spent time in Syria. El-Khazzani's lawyer said on Sunday that he was homeless and trying to rob passengers on the train to feed himself.

Authorities in France, Belgium and Spain, where he once lived, are investigating the case. French authorities can legally hold him for questioning until Tuesday, when they must charge him or free him.

His case raises questions about train security as well as how a man who had been on the radar of all three countries managed to board the train unbothered and loaded with weapons.

Skarlatos said El-Khazzani "clearly had no firearms training whatsoever," but if he "even just got lucky and did the right thing he would have been able to operate through all eight of those magazines and we would've all been in trouble, and probably wouldn't be here today, along with a lot of other people."

Armed with an arsenal of weapons and apparently determined, he presented a formidable challenge to the vacationing friends who snapped into action out of what Skarlatos said was "gut instinct."

His and Stone's military training "mostly kicked in after the assailant was already subdued," he said, noting the medical care Stone provided and checking cars for weapons elsewhere.

"We just kind of acted. There wasn't much thinking going on," he said, at least on my end." Stone replied with a chuckle, "None at all."

Stone and Skarlatos moved in to tackle the gunman and take his gun. The third young man, Anthony Sadler, 23, moved in to help subdue the assailant. "All three of us started punching" him, Stone said. Stone said he choked him unconscious. The British businessman then joined in the fray.

Stone, of Carmichael, California, spoke at a live news conference at the U.S. ambassador's residence in Paris along with Sadler, a senior at Sacramento State University in California, and Skarlatos, of Roseburg, Oregon.

El-Khezzani boarded in Brussels with what France's interior minister said was an arsenal of weapons that included an automatic pistol, numerous loaded magazines and the box cutter. He was subdued while the train traveled through Belgium, but was taken into custody in the northern French town of Arras, where the train was rerouted.

El-Khezzani's lawyer said her client doesn't understand the suspicions, media attention or even that a person was wounded. For him, there were no gunshots fired, Sophie David said.

"He is dumbfounded that his action is being characterized as terrorism," she said.

He described himself as homeless and David said she had "no doubt" this was true, saying he was "very, very thin" as if suffering from malnutrition and "with a very wild look in his eyes."

He claims to have found the weapons in a park near the Brussels train station where he had been sleeping, stashed them for several days and then decided to hold up train passengers.

"He thought of a holdup to be able to feed himself, to have money," she said on BFM-TV, then "shoot out a window and jump out to escape."

Spanish authorities said El-Khazzani had lived with his parents in the southern city of Algeciras until last year and had a police record for drug-dealing. Spanish newspapers El Pais and El Mundo both reported that he had lived in the relatively poor neighborhood of El Saladillo, which has around 6,000 inhabitants and an unemployment rate close to 40 percent.

It was unclear how long he was in Spain.

However, Spain notified French intelligence in February 2014, and he was placed on a watch list of potentially dangerous individuals, Cazeneuve has said.

There were discrepancies between French and Spanish accounts of the gunman's travels.

An official linked to Spain's anti-terrorism unit said the suspect lived in Spain until 2014, then moved to France, traveled to Syria, and returned to France. That official spoke on condition anonymity because he wasn't authorized to be identified by name.

A French official close to the investigation said a watch list signal "sounded" on May 10 in Berlin, where El-Khazzani was flying to Turkey. The French transmitted this information to Spain, which advised on May 21 that he no longer lived there but in Belgium. The French then advised Belgium, according to the official close to the investigation, but it wasn't clear what, if any, action was taken after that.

He didn't escape the Americans as easily.

"When most of us would run away, Spencer, Alek and Anthony ran into the line of fire, saying 'Let's go.' Those words changed the fate of many," U.S. Ambassador Jane Hartley said.

Asked if there were lessons, Sadler had one for all who find themselves in the face of a choice.

"Do something," he said. "Hiding, or sitting back, is not going to accomplish anything. And the gunman would've been successful if my friend Spencer had not gotten up. So I just want that lesson to be learned going forward, in times of, like, terror like that, please do something. Don't just stand by and watch."