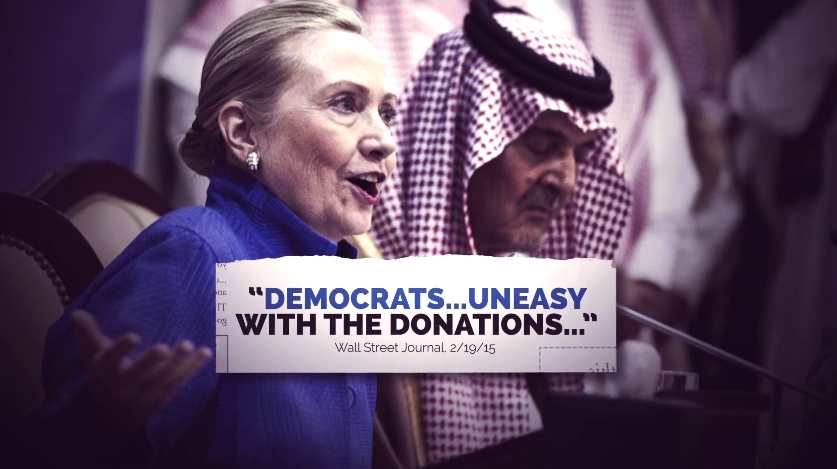 And in a curious piece of strategic jiu-jitsu, the group used the words of a staunch progressive - Sen. Elizabeth Warren, D-Massachusetts - to make its case.

"Powerful interests have tried to capture Washington and rig the system in their favor," intones Warren's voice in the 30-second ad. "The power of well-funded special interests tilts our democracy away from the people and toward the powerful...Action is required to defend our great democracy against those who would see it perverted into one more rigged game where the rich and the powerful always win."

As the ad concludes, the text onscreen reads, "Powerful Foreign Governments are Ready for Hillary. Are We?"

The Bill, Hillary, and Chelsea Clinton Foundation is a non-profit group that dedicates itself to a variety of philanthropic causes across the world. As she mulls a presidential bid in 2016, Hillary Clinton has come under fire over concerns that the foundation's receipt of money from foreign governments could present a conflict of interest, particularly if she wins the presidency.

The foundation has said it will stop accepting foreign government donations if Clinton launches a bid, just as it did during her time as U.S. Secretary of State. But some have urged the foundation not to wait.

The New York Times editorial board argued last week that it's "important that Mrs. Clinton, in defending the family's efforts on behalf of the world's needy, reassure the public that the foundation will not become a vehicle for insiders' favoritism."

Warren, whom some progressives have entreated to enter the 2016 race, has not commented on the Clinton foundation's finances. Her words in the ad were originally part of a more general critique about how wealthy special interests are crowding out the voice of the American people - a narrative she's deployed frequently against Republicans and conservatives in recent years.

But Paul Lindsay, the communications director for American Crossroads, told CBS News Warren "must be just as outraged as every other American about Hillary Clinton's donations from foreign governments."