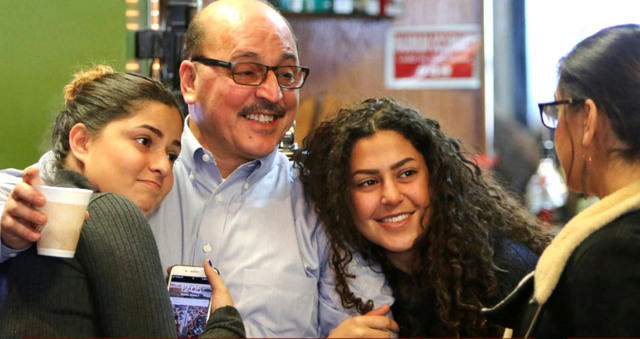 A daughter of an Ohio businessman who was suddenly deported to his native Jordan last week after living in the U.S. for nearly four decades accused immigration authorities of tricking and targeting her father. Amer Adi Othman of Youngstown was deported after being in custody for about two weeks.

The U.S. Immigration and Customs Enforcement agency said federal courts had determined that Othman didn't have a legal basis for being in the country. Othman's first wife had said their marriage was illegitimate, but she recanted that statement years later, according to Othman's daughter Haneen Adi, who spoke to CBS News on Wednesday.

Othman was arrested on Jan. 16 when he went to what he was told would be a check-in meeting with ICE officials, Adi told CBSN's Vladimir Duthiers and Anne-Marie Green from the West Bank.

In August, Othman was told he would be deported on Jan. 7, Adi said. Two days before his scheduled departure, after he had packed his belongings and sold his home, he was granted a temporary stay, and the check-in meeting was scheduled.

When Othman went to the meeting, he was accompanied by U.S. Rep. Tim Ryan, D-Ohio, and a group of friends and family.

"They just took him into custody for absolutely no reason," Adi said. "There was no justification at all. They told everyone there that this was just the decision they had decided on."

According to Adi, Othman's first wife had said that immigration authorities pressured her to say that their marriage was a sham but she submitted a lengthy affidavit detailing its legitimacy years later.

Adi, her mother and Adi's three siblings are U.S. citizens. Othman and Adi's mother have been married for nearly 30 years.

"My entire life has been lawyer after lawyer, ICE meeting after ICE meeting," she said. "He's tried every single thing. They made it almost impossible for him. Citiizenship would be absolutely amazing. That's what he's been striving for the entire time."

In Jordan, Adi said her father is with his mother and siblings, but he doesn't have a job, unlike his life in Ohio.

"To be ripped out of that and placed somewhere where you really don't have a life," she said, "is completely inhumane."