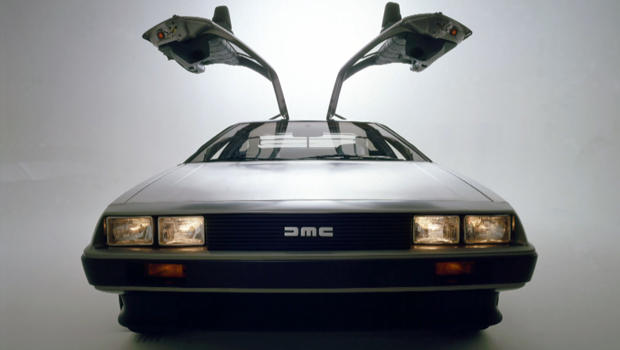 And now a page from our "Sunday Morning" Almanac: January 21st, 1981, 37 years ago today … the day the very first DeLorean rolled off the assembly line in Northern Ireland.

Created by former General Motors executive John DeLorean, his namesake stainless-steel car was truly like no other, with its gull-wing doors rising effortlessly to beckon you inside.

Pricey for its time, DeLorean sales fell FAR short of the hype.

By the end of 1982, the DeLorean company had shut down after making just 9,000 cars, while DeLorean the man stood accused of a $24 million cocaine conspiracy.

DeLorean claimed entrapment, and was found not guilty in 1984.

Marty McFly: "Wait a minute, Doc -- are you telling me that you built a time machine … out of a DeLorean?"
Doc Brown: "The way I see it, if you're gonna build a time machine into a car, why not do it with some style?"


But the most memorable date in the DeLorean's popular history unquestionably remains October 26th, 1985 -- the day Christopher Lloyd's time-traveling DeLorean accidentally takes Michael J. Fox to the year 1955 in the first of the three "Back to the Future" movies.

And though THAT DeLorean was smashed to bits at the end of the third film, never fear: The very first DeLorean still survives, and is on display at the Cleveland History Center.

And a successor DeLorean company plans to bring the fabled car back into production in the very near future -- January 21st of NEXT year.