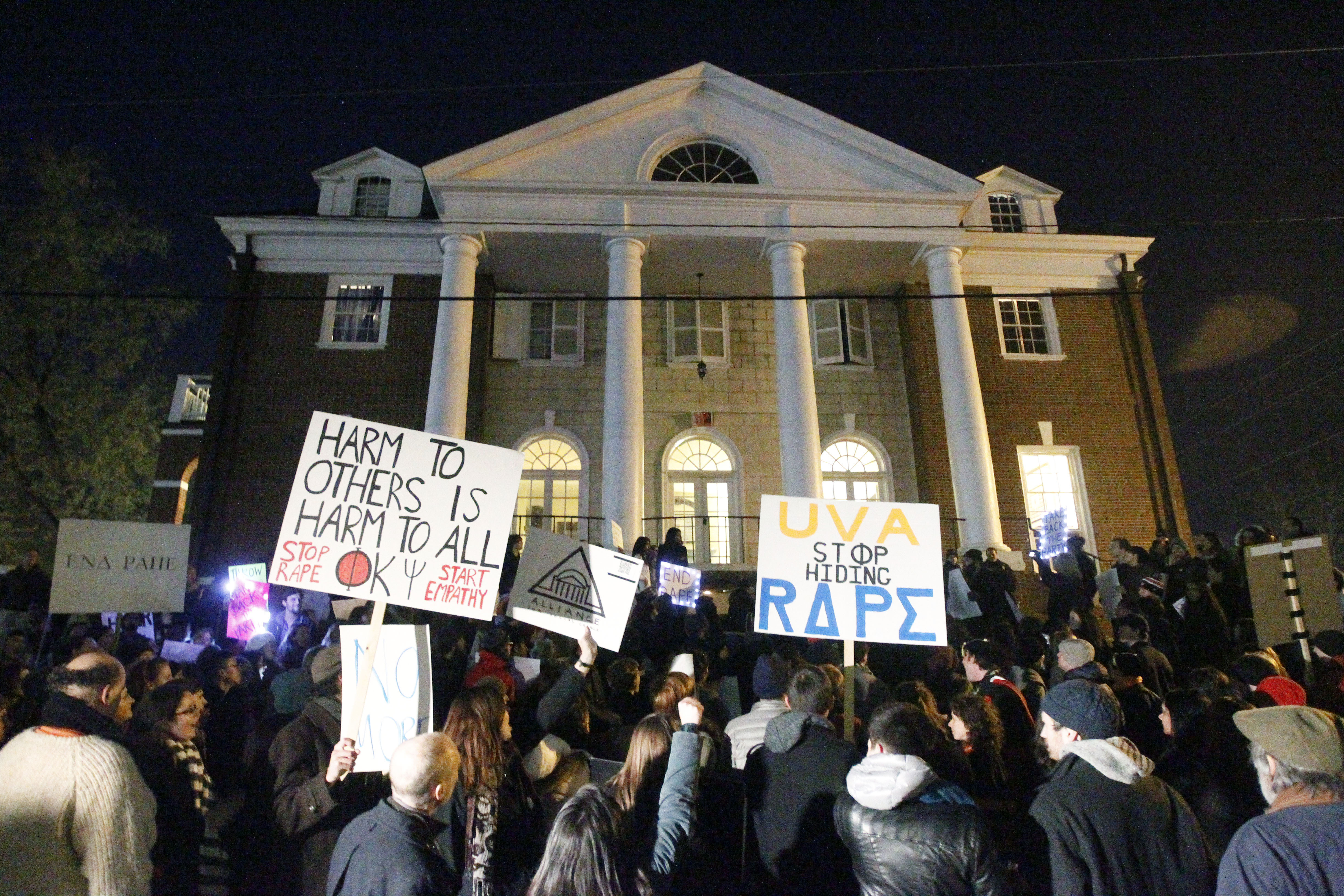 CHARLOTTESVILLE, Va. -- A five-month police investigation into an alleged gang rape at the University of Virginia, described in graphic detail in a Rolling Stone article, showed no evidence the attack took place and was stymied by the accuser's unwillingness to cooperate, authorities said Monday.

The article entitled "A rape on campus" traced the story from a student identified only as "Jackie," who said she was raped at a Phi Kappa Psi fraternity house on September, 28, 2012. Police said there were numerous discrepancies between the article and what they found in their investigation.

"All I can tell you is that there is no substantive basis to conclude that what was reported in that article happened," Charlottesville Police Chief Timothy Longo said.

Longo said Jackie first described a sexual assault in May 2013 when she met with a dean about an academic issue, but "the sexual act was not consistent with what was described" in the Rolling Stone article. When she met with police, she didn't want them to investigate the alleged assault.

She also refused to talk to police after the article was printed in November and ignited the national conversation about sexual assaults on college campuses. Discrepancies in the article were found by news organizations soon after it was published.

The magazine has admitted it had mistakes in the story and said it would investigate.

Longo said the case is suspended, not closed. He said the fact that investigators could not find evidence "doesn't mean that something terrible didn't happen to Jackie."

Investigators spoke to about 70 people, including friends of the accuser and fraternity members, and spent hundreds of hours on the investigation, Longo said.

Police said in January they had been unable to confirm that the alleged gang rape occurred at the Phi Kappa Psi house, but added that they were still investigating.

In addition to the alleged gang rape, the article described a hidden culture of sexual violence fueled by binge drinking at the university.

In the article, Jackie said that during her first semester on campus, she had gone on a date with a classmate named "Drew" who later that night lured her into a secluded room at a fraternity house. Inside the room, she said, she was raped by a group of seven fraternity brothers while her date and one other man watched.

The magazine described a distraught Jackie later telling three friends about the assault, and two of them discouraging her from reporting it to authorities because she could become a social outcast.

"The discredited article has done significant damage to the ability of the chapter's members to succeed in their educational pursuits, and besmirched the character of undergraduate students at the University of Virginia who did not deserve the spotlight of the media," the statement said.

"CBS This Morning" spoke with the three friends of the victim who were mentioned in the Rolling Stone article. The accounts the friends gave were similar to each other, but very different from that of "Jackie," reported CBS News correspondent Julianna Goldman. The article said the friends saw and spoke to Jackie the night of the alleged assault.

Alex, a third year student at UVA who asked we only use his first name, said he first read the piece not realizing he'd be a central figure in the Rolling Stone article.

Alex realized he was the "Andy" in the article identified as a friend of Jackie's who saw her after the incident in 2012.

In the article, Jackie is described as "shaking" and "bloody" after the alleged attack. The article says that, instead of seeking help, her friends "launched into a heated discussion about the social price of reporting Jackie's rape," fearing it might damage their reputations. Alex told "CBS This Morning" that account is false. He said while he's not hurt by the account, he is "a little confused."

"I mean, Jackie and I aren't really close. And I know that she, you know, is a very good storyteller. ... I wish I knew sort of why she decided to portray everybody who, you know, tried to help her as somehow horrible, sort of 'Animal House' frat boys. But, you know, I'm not sure," Alex said.

The article also reported that Jackie was gang-raped by seven men who beat her and threw her through a glass table while two other men urged them on in a fraternity house. The friends said Jackie told them that she was forced to perform oral sex on five men.

Phi Kappa Psi said it did not host a party at the house on the date Jackie said she was assaulted.

Contacted before the news conference, Jackie's attorney Palma Pustilnik said she would not have any comment afterward.

Social activities at fraternities were suspended after the article was published but were reinstated after Greek organizations agreed to rules banning kegs, requiring security workers and ensuring at least three fraternity members are sober.

The university said the new rules will be re-examined in May to determine whether adjustments are warranted.

Rolling Stone has asked the dean of the Columbia University Graduate School of Journalism to conduct a review of its reporting. The magazine is expected to publish those findings in a couple of weeks, media outlets reported.

The fallout from the article contributed to a difficult academic year at U.Va. The September disappearance of 18-year-old student Hannah Graham gripped the campus for weeks, and the community was left grieving after her body was found a few miles away in rural Albemarle County. And last week, racial tensions erupted after a black student suffered a gash on his head while he was arrested outside a Charlottesville bar.