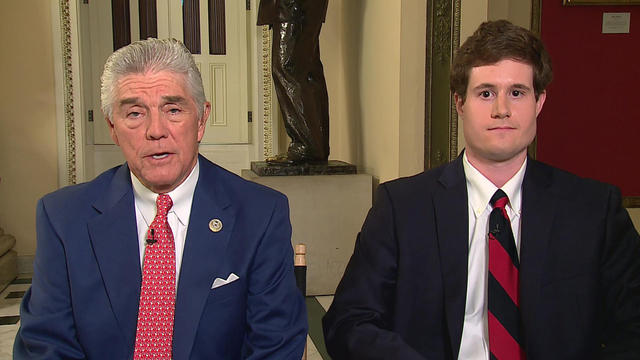 Rep. Roger Williams, R-Texas, and a member of his staff, Zach Barth, credit the heroic efforts of the U.S. Capitol Police for saving their lives during Wednesday's shooting at an Alexandria, Virginia baseball field.

The two joined a group of other Republican congressmen and teammates in practicing for Thursday's annual Congressional Baseball Game for Charity when a gunman, James T. Hodgkinson, opened fire at the group. Williams described hearing an ongoing series of pops and cracks.

"I didn't realize the shooter was probably 20 yards behind me, I hit a ground ball to (House Majority Whip Steve) Scalise and immediately heard a pop. I thought it was a car backfiring," Williams recounted on "CBS This Morning,"

Barth, who was also injured in the attack, echoed Williams' description of the attack, saying he was out shagging fly balls when he heard the loud pops, then saw Hodgkinson with a long gun.

"There was nowhere for me to go so I got on all fours and I saw him train his gun at me." It was then, Barth described, that his "flight-or-fight kicked in." He ran down the first base line and into the dugout.

"My single focus was to stay alive and to keep everyone safe," said Barth.

Williams said that in the dugout, he was joined by several colleagues including Rep. Mo Brooks of Alabama and Senator Jeff Flake of Arizona, who helped make a tourniquet out of Brooks' belt for Barth to help stop the bleeding.

"I didn't know what was going on but thank the lord for Special Agents (Crystal) Griner and (David) Bailey, without them I don't think I'd be talking with you today," said Barth.

"We're blessed, but these Capitol Police saved all our lives. They're heroes, we owe it all to them," echoed Williams.

Williams said he was not sure if one particular Republican was the target of Wednesday's shooting, but given Hodgkinson's vocal outrage for the Republican party and President Trump on social media, he believes members of Congress in general were the targets.

When asked if campaign funds should be allocated for more protection for members of Congress, Williams said it was idea worth looking at.

"When you have group of congressmen in one group, we ought to study that in terms of security. Doesn't make for a good situation, it needs to be looked at and studied."

Members of Congress are still set to play ball on Thursday as the charity event will go forward as planned. Williams, who has been the head coach for the Republican team since he first joined Congress in 2013, will be coaching third base on crutches after suffering an ankle injury during the chaos of the shooting.

House Majority Whip Steve Scalise is still in the hospital and is in critical condition after undergoing hip surgery for injuries sustained during the shooting.

Matt Mika, a lobbyist for Tyson Foods, who was helping with practice during Wednesday's shooting, was also seriously wounded. According to family members, Mika suffered multiple gunshot wounds and remains in the ICU in critical condition after undergoing two operations yesterday.