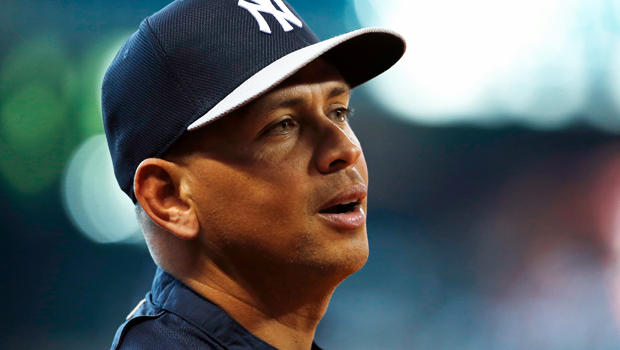 Rodriguez also would be sidelined for any postseason games this year under the ruling announced Saturday, which costs him $25 million of the $86 million remaining on his contract.

"The number of games sadly comes as no surprise, as the deck has been stacked against me from day one," Rodriguez said in a statement posted to his Facebook page. "This is one man's decision, that was not put before a fair and impartial jury, does not involve me having failed a single drug test, is at odds with the facts and is inconsistent with the terms of the Joint Drug Agreement and the Basic Agreement, and relies on testimony and documents that would never have been allowed in any court in the United States because they are false and wholly unreliable."

"60 Minutes" will offer the first look at the details in the doping case against Yankee slugger Alex Rodriguez, including interviews with Major League Baseball's chief witness against him, Anthony Bosch - who says he injected Rodriguez with banned substances - as well as the league's COO Rob Manfred. Scott Pelley's report will be broadcast Sunday, Jan. 12 (8:00-9:00 PM, ET/PT) on the CBS Television Network. Learn some of the first details here.

The three-time AL MVP was given the 211-game penalty by Commissioner Bud Selig on Aug. 5 following Major League Baseball's investigation of the Biogenesis of America anti-aging clinic, which was accused of distributing banned performance-enhancing drugs.

The Major League Baseball Players Association filed a grievance saying the discipline was without "just cause."

Despite the ban, baseball's drug rules allow Rodriguez to participate in spring training and play in exhibition games.

"His physical situation being what it is, he's not going to be able to come back to baseball, and that's what baseball wanted - they wanted him out of the game," Madden said.

In a statement, MLB said: "While we believe the original 211-game suspension was appropriate, we respect the decision rendered by the panel and will focus on our continuing efforts on eliminating performance-enhancing substances from our game."

While the 38-year-old Rodriguez could fight the ruling in court, judges rarely overturn arbitrators' decisions.

"That's a real, real longshot," said Nightengale. "There's really no chance federal court's going to step in and bother with this."

"Federal courts do not get involved in arbitration cases - very rarely," said Madden, "and they would have to prove that the arbitrator acted in a capricious manner."

The union said in its own statement that it "strongly disagrees" with the ruling but added "we recognize that a final and binding decision has been reached.

"We respect the collectively-bargained arbitration process which led to the decision," the union said added.

The Yankees released a statement saying the team would also respect the decision.

Rodriguez, however, plans to continue the fight.

"This injustice is MLB's first step toward abolishing guaranteed contracts in the 2016 bargaining round, instituting lifetime bans for single violations of drug policy, and further insulating its corrupt investigative program from any variety defense by accused players, or any variety of objective review," he said.

"I have been clear that I did not use performance-enhancing substances as alleged in the notice of discipline, or violate the Basic Agreement or the Joint Drug Agreement in any manner, and in order to prove it I will take this fight to federal court. I am confident that when a federal judge reviews the entirety of the record, the hearsay testimony of a criminal whose own records demonstrate that he dealt drugs to minors, and the lack of credible evidence put forth by MLB, that the judge will find that the panel blatantly disregarded the law and facts, and will overturn the suspension."

Rodriguez has claimed Selig was on a vendetta to smear him as a way of burnishing the commissioner's image following the Steroids Era. Both sides have admitted paying for evidence as they prepared for the hearing.

Fourteen players were penalized following the Biogenesis probe, and they all accepted penalties. Milwaukee outfielder Ryan Braun sat out the final 65 games of the season, the other players were given 50-game suspensions.

A-Rod's drug penalty was for "his use and possession of numerous forms of prohibited performance-enhancing substances, including testosterone and human growth hormone over the course of multiple years," MLB said last summer. His punishment under the labor contract was "for attempting to cover up his violations of the program by engaging in a course of conduct intended to obstruct and frustrate the office of the commissioner's investigation."

Rodriguez admitted in 2009 that he used PEDs while with Texas from 2001-03 but has repeatedly denied using them since.

His penalty was more than double the previous high for a PED suspension, a 100-game ban given last year to San Francisco pitcher Guillermo Mota for a second offense. Kansas City infielder Miguel Tejada was given a 105-game ban last summer following a third positive test for amphetamines.

Rodriguez is still signed by the Yankees through 2017 at salaries of $21 million in 2015 and $20 million in each of the final two seasons, part of his record $275 million, 10-year contract with the Yankees.

The players' union has often succeeded at persuading arbitrators to overturn or shorten drug suspensions. In the era before the drug agreement was reached in 2002, LaMarr Hoyt, Ferguson Jenkins, Pascual Perez and Willie Wilson were among those who had success in hearings. Steve Howe's lifetime ban for a seventh suspension related to drugs or alcohol was cut to 119 days.

Picked first in the 1993 amateur draft, Rodriguez reached the majors at age 18 with Seattle and was an All-Star by 20. He seemed destined to become one of the greatest players in the history of the game, and appeared in line to break the career home run record - he ranks fifth with 647.

The 65-year-old Horowitz became baseball's independent arbitrator in June 2012. Shyam Das, who had held the position since 1999, was fired a month earlier by management following his decision to overturn Ryan Braun's 50-game suspension for a positive drug test. In his first decision, Horowitz upheld Mota's suspension.

The U.S. Supreme Court has set narrow grounds for judges to consider when overturning arbitrators, ruling in 1960 that "the refusal of courts to review the merits of an arbitration award is the proper approach to arbitration under collective bargaining agreements. The federal policy of settling labor disputes by arbitration would be undermined if courts had the final say on the merits of the awards."

In that case, United Steelworkers of America v. Enterprise Wheel and Car Corp., Justice Stephen Douglas wrote for the court that "an arbitrator is confined to interpretation and application of the collective bargaining agreement; he does not sit to dispense his own brand of industrial justice. ... His award is legitimate only so long as it draws its essence from the collective bargaining agreement. When the arbitrator's words manifest an infidelity to this obligation, courts have no choice but to refuse enforcement of the award."

That case was cited by the 8th U.S. Circuit Court of Appeals in 1976 when it refused a request by MLB to vacate the decision by arbitrator Peter Seitz overturning baseball's reserve clause in the Andy Messersmith-Dave McNally case.

In an attempt to overturn the Horowitz's decision, Rodriguez's lawyers could cite section 10 of the Federal Arbitration Act, which states a decision could be set aside "where the award was procured by corruption, fraud or undue means" ... "where there was evident partiality or corruption in the arbitrators" ... where the arbitrator was "refusing to hear evidence pertinent and material to the controversy" or "where the arbitrators exceeded their powers."

Rodriguez walked out of the hearing in the middle of the Nov. 21 session after Horowitz refused to order Selig to testify. The sides rested the following day.