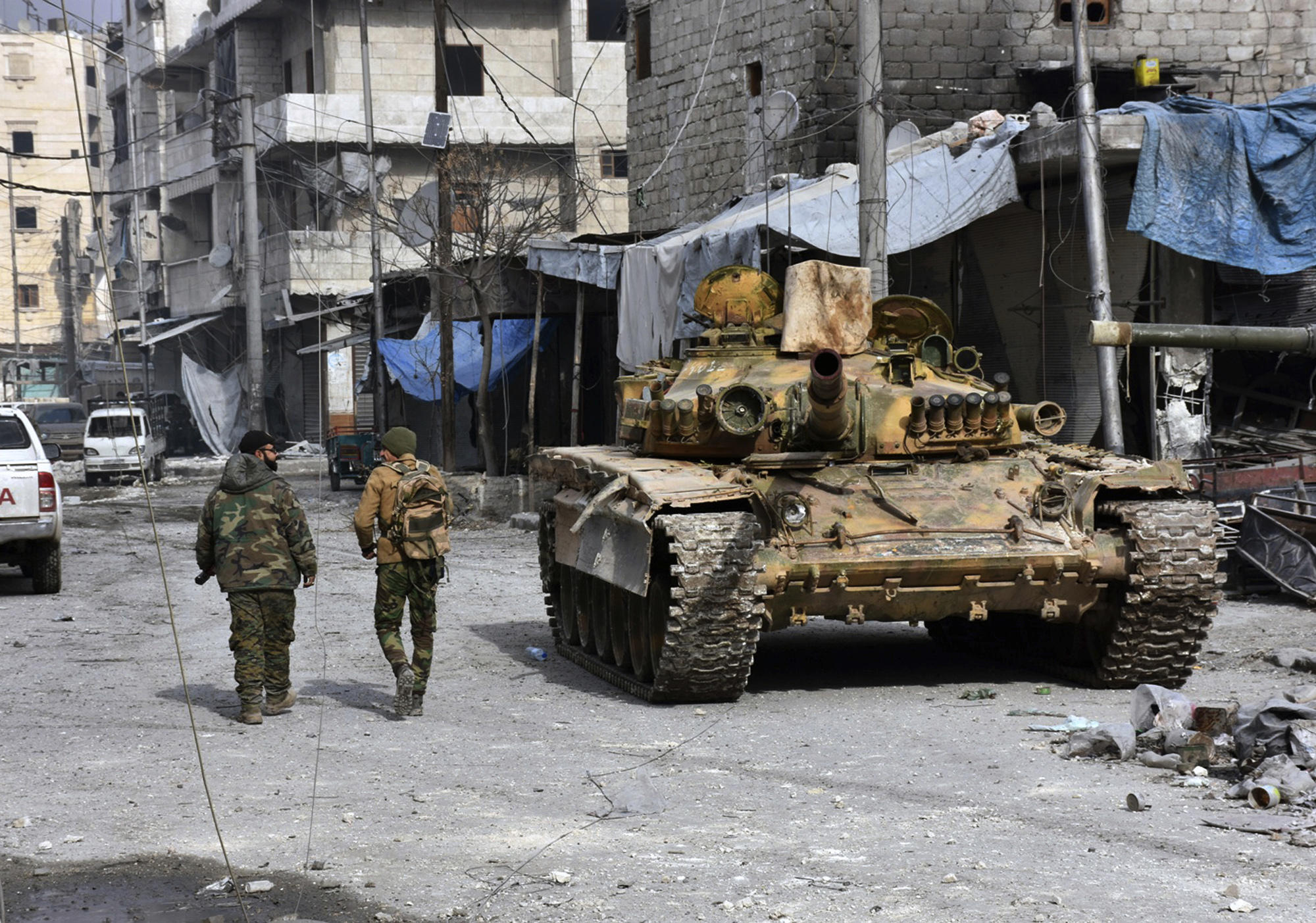 BEIRUT -- Syrian government forces poised for the final sweep to take the last rebel holdouts in eastern Aleppo on Tuesday as the international community and aid agencies appealed that the lives of thousands of civilians who have “nowhere safe to run” be spared and that those fighting to capture the rebel enclave refrain from atrocities.

The appeals came as United Nations human rights officials said they had credible reports that pro-Syrian government forces had killed 82 civilians in execution-style murders -- including women and children -- in just the last two days of the blitz on eastern Aleppo.

“In all as of yesterday (Monday) evening we have received reports of pro-government forces killing at least 82 civilians, including 11 women and 13 children, in four different neighbourhoods,” U.N. human rights office spokesman Rupert Colville said, according to the Reuters news agency. He said “many more” could have met the same fate, but the evidence gathered pointed to at least the 82 deaths documented.

“The reports we had are of people being shot in the street trying to flee and shot in their homes,” Colville said.

Jens Laerke, aother U.N. humanitarian spokesman, was quoted by Reuters as saying Aleppo was witnessing “a complete meltdown of humanity.”

Colville said thousands of people were believed to be holed up in less than one square mile of territory -- a “hellish corner” -- still held by rebel forces.

The dramatic appeals came a day after the Syrian military announced it now holds 99 percent of the former rebel neighborhoods of Aleppo, signaling an impending end to the rebels’ four-year hold over parts of the city as the final hours of the battle play out.

Retaking Aleppo, which has been divided between rebel- and government-controlled zones since 2012, would be President Bashar Assad’s biggest victory yet in the country’s civil war. Aleppo has long been regarded as a major gateway between Turkey and Syria.

But a government win in Aleppo does not end the conflict -- significant parts of Syria are still outside government control and huge swaths of the country are a devastated waste-land. More than a quarter of a million people have been killed.

CBS News correspondent Debora Patta says the battle for Aleppo has stretched the Syrian forces so thin, that the regime lost control of another small, but highly symbolic prize; the ancient city of Palmyra, which the government vowed it would never lose again, is back under the control of the Islamic State of Iraq and Syria (ISIS).

Earlier this year, and with much fanfare, Syrian and Russian forces declared ISIS would never come back to the largely-gutted UNESCO World Heritage site. But the attention focused on Aleppo meant the Islamic extremists’ absence was to last just nine months.

The International Committee of the Red Cross in a statement on Tuesday urged all fighting in Aleppo to spare civilian lives. It said thousands of people with no part in the violence “have literally nowhere safe to run.”

“In order for this to happen, we appeal to the parties to put humanity ahead of military objectives”, said ICRC’s head of delegation in Syria, Marianne Gasser, who is currently in Aleppo. “We stand ready to oversee the implementation of any mutual agreement that puts civilians first. We cannot urge this strongly enough: this must happen.”

U.N. Secretary-General Ban Ki-moon said in a statement late Monday that he is alarmed over reports of atrocities against a large number of civilians, including women and children, in the past hours in Aleppo. While stressing that the United Nations is not able to independently verify these reports, the U.N. chief said he conveyed his grave concern to the relevant parties.

Ban also said the U.N. underlines the obligation of all parties on the ground to protect civilians and abide by international humanitarian and human rights law, adding that “this is particularly the responsibility of the Syrian government and its allies.”

In Moscow, which has been Assad’s major ally in the war, the Defense Ministry said Tuesday that Syrian forces now control ‘more than 98 percent” of Aleppo and the rebels are holding out a neighborhood roughly the size of 1 square mile.

Several Syrian opposition activists claimed government forces were carrying out summary killings of rebels in the streets in neighborhoods captured on Monday but the Syrian military denied the claims, saying such allegations were “a desperate attempt” to try gain international sympathy.

Turkey’s Deputy Prime Minister Numan Kurtulmus’ called for an immediate cease-fire and if that is too late, he called on the international community, European countries, regional countries and Turkey to organize an international aid convoy to people in need in Aleppo.

On Monday, staff members of the last remaining clinic in rebel-held territory in Aleppo huddled in a shelter as Syrian government forces pushed in. “Those killed and wounded are left on the streets,” said the clinic’s administrator, Mohammed Abu Rajab.

“The collapse is terrifying,” said Bassam Haj Mustafa, a rebel spokesman in contact with fighters in the city. Opposition fighters were “doing their best to defend what is left,” he added.

Rami Abdurrahman, who heads the Britain-based Syrian Observatory for Human Rights, said more than 60 civilians and fighters were killed in rebel-held neighborhoods of Aleppo on Monday alone.