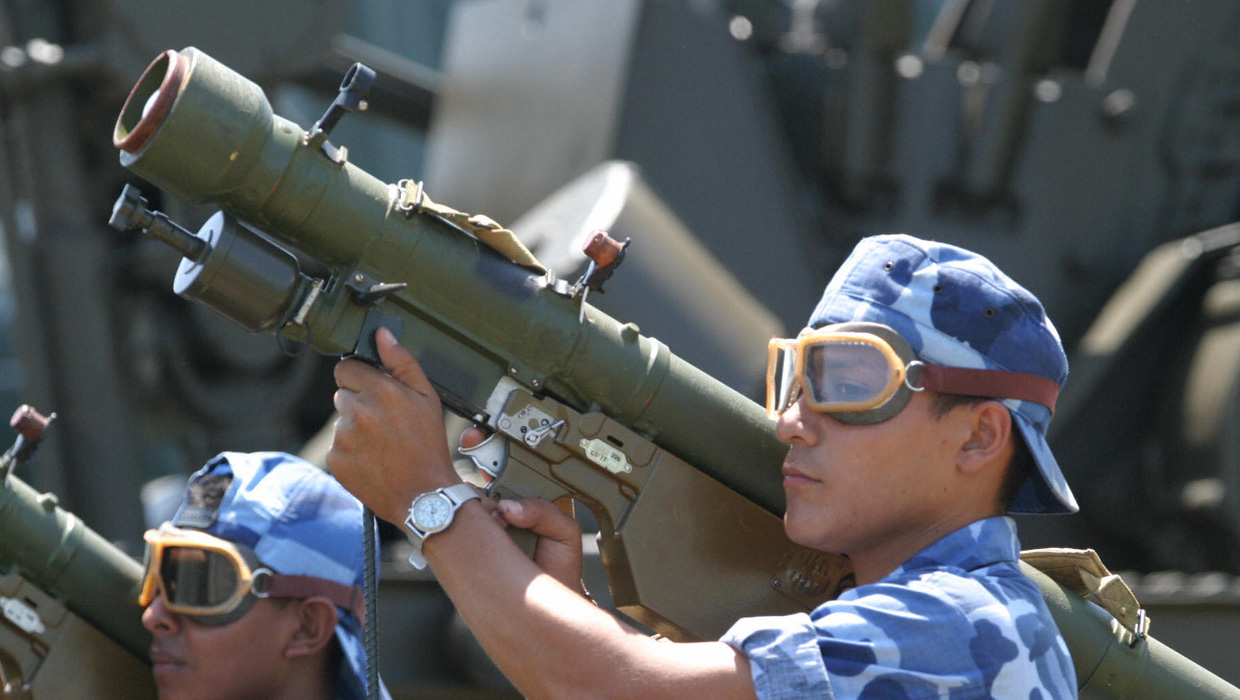 TIMBUKTU, Mali The photocopies of the manual lay in heaps on the floor, in stacks that scaled one wall, like Xeroxed, stapled handouts for a class.

Except that the students in this case were al Qaeda fighters in Mali. And the manual was a detailed guide, with diagrams and photographs, on how to use a weapon that particularly concerns the United States: A surface-to-air missile capable of taking down a commercial airplane.

The 26-page document in Arabic, recovered by The Associated Press in a building that had been occupied by al Qaeda in the Islamic Maghreb in Timbuktu, strongly suggests the group now possesses the SA-7 surface-to-air missile, known to the Pentagon as the Grail, according to terrorism specialists. And it confirms that the al Qaeda cell is actively training its fighters to use these weapons, also called man-portable air-defense systems, or MANPADS, which likely came from the arms depots of ex-Libyan strongman Col. Moammar Gadhafi.

"The existence of what apparently constitutes a `Dummies Guide to MANPADS' is strong circumstantial evidence of al Qaeda in the Islamic Maghreb having the missiles," said Atlantic Council analyst Peter Pham, a former adviser to the United States' military command in Africa and an instructor to U.S. Special Forces. "Why else bother to write the guide if you don't have the weapons? ... If AQIM not only has the MANPADS, but also fighters who know how to use them effectively," he added, "then the impact is significant, not only on the current conflict, but on security throughout North and West Africa, and possibly beyond."

The United States was so worried about this particular weapon ending up in the hands of terrorists that the State Department set up a task force to track and destroy it as far back as 2006. In the spring of 2011, before the fighting in Tripoli had even stopped, a U.S. team flew to Libya to secure Gadhafi's stockpile of thousands of heat-seeking, shoulder-fired missiles.

By the time they got there, many had already been looted.

"The MANPADS were specifically being sought out," said Peter Bouckaert, emergencies director for Human Rights Watch, who catalogued missing weapons at dozens of munitions depots and often found nothing in the boxes labeled with the code for surface-to-air missiles.

The manual is believed to be an excerpt from a terrorist encyclopedia edited by Osama bin Laden. It adds to evidence for the weapon found by French forces during their land assault in Mali earlier this year, including the discovery of the SA-7's battery pack and launch tube, according to military statements and an aviation official who spoke on condition of anonymity because he wasn't authorized to comment.

The knowledge that the terrorists have the weapon has already changed the way the French are carrying out their five-month-old offensive in Mali. They are using more fighter jets rather than helicopters to fly above its range of 1.4 miles (2.3 kilometers) from the ground, even though that makes it harder to attack the jihadists. They are also making cargo planes land and take off more steeply to limit how long they are exposed, in line with similar practices in Iraq after an SA-14 hit the wing of a DHL cargo plane in 2003.

And they have added their own surveillance at Mali's international airport in Bamako, according to two French aviation officials and an officer in the Operation Serval force. All three spoke on condition of anonymity because they were not authorized to comment.

"There are patrols every day," said the French officer. "It's one of the things we have not entrusted to the Malians, because the stakes are too high."

First introduced in the 1960s in the Soviet Union, the SA-7 was designed to be portable. Not much larger than a poster tube, it can be packed into a duffel bag and easily carried. It's also affordable, with some SA-7s selling for as little as $5,000.

Since 1975, at least 40 civilian aircraft have been hit by different types of MANPADS, causing about 28 crashes and more than 800 deaths around the world, according to the U.S. Department of State.

The SA-7 is an old generation model, which means most military planes now come equipped with a built-in protection mechanism against it. But that's not the case for commercial planes, and the threat is greatest to civilian aviation.

In Kenya in 2002, suspected Islamic extremists fired two SA-7s at a Boeing 757 carrying 271 vacationers back to Israel, but missed. Insurgents in Iraq used the weapons, and YouTube videos abound purporting to show Syrian rebels using the SA-7 to shoot down regime planes.

An SA-7 tracks a plane by directing itself toward the source of the heat, the engine. It takes time and practice, however, to fire it within range. The failure of the jihadists in Mali so far to hit a plane could mean that they cannot position themselves near airports with commercial flights, or that they are not yet fully trained to use the missile.

"This is not a `Fire and forget' weapon," said Bruce Hoffman, director of the Center for Security Studies at Georgetown University. "There's a paradox here. One the one hand it's not easy to use, but against any commercial aircraft there would be no defenses against them. It's impossible to protect against it. ... If terrorists start training and learn how to use them, we'll be in a lot of trouble."

In Timbuktu, SA-7 training was likely part of the curriculum at the `Jihad Academy' housed in a former police station, said Jean-Paul Rouiller, director of the Geneva Center for Training and Analysis of Terrorism, one of three experts who reviewed the manual for AP. It's located less than 3 miles (5 kilometers) from the Ministry of Finance's Budget Division building where the manual was found.

Neighbors say they saw foreign fighters running laps each day, carrying out target practice and inhaling and holding their breath with a pipe-like object on their shoulder. The drill is standard practice for shoulder-held missiles, including the SA-7.

As the jihadists fled ahead of the arrival of French troops who liberated Timbuktu on Jan. 28, they left the manual behind, along with other instructional material, including a spiral-bound pamphlet showing how to use the KPV-14.5 anti-aircraft machine gun and another on how to make a bomb out of ammonium nitrate, among other documents retrieved by the AP. Residents said the jihadists grabbed reams of paper from inside the building, doused them in fuel and set them alight. The black, feathery ash lay on top of the sand in a ditch just outside the building's gate.

However, numerous buildings were still full of scattered papers.

"They just couldn't destroy everything," said neighbor Mohamed Alassane. "They appeared to be in a panic when the French came. They left in a state of disorder."

The manual is illustrated with grainy images of Soviet-looking soldiers firing the weapon. Point-by-point instructions explain how to insert the battery, focus on the target and fire.

The manual also explains that the missile will malfunction above 45 degrees Celsius, the temperature in the deserts north of Timbuktu. And it advises the shooter to change immediately into a second set of clothes after firing to avoid detection.

Its pages are numbered 313 through 338, suggesting they came from elsewhere. Mathieu Guidere, an expert on Islamic extremists at the University of Toulouse, believes the excerpts are lifted from the Encyclopedia of Jihad, an 11-volume survey on the craft of war first compiled by the Taliban in the 1990s and later codified by Osama bin Laden. Bin Laden, who led a contingent of Arab fighters in Afghanistan at the time, paid to have the encyclopedia translated into Arabic, according to Guidere, author of a book on al Qaeda's North African branch.

However, the cover page of the manual boasts the name of al Qaeda in the Islamic Maghreb.

"It's a way to make it their own," said Guidere. "It's like putting a logo on something. ... It shows the historic as well as the present link between al Qaeda core and AQIM."

Bin Laden later assembled a team of editors to update the manual, put it on CD-ROMs and eventually place it on the Internet, in a move that lay the groundwork for the globalization of jihad, according to terrorism expert Jarret Brachman, who was the director of research at the Combating Terrorism Center when the al Qaeda encyclopedia was first found.

N.R. Jenzen-Jones, an arms expert in Australia, confirmed that the information in the manual in Timbuktu on the missile's engagement range, altitude and weight appeared largely correct. He cautions though that the history of the SA-7 is one of near-misses, specifically because it takes training to use.

"Even if you get your hands on an SA-7, it's no guarantee of success," he said. "However, if someone manages to take down a civilian aircraft, it's hundreds of dead instantly. It's a high impact, low-frequency event, and it sows a lot of fear."