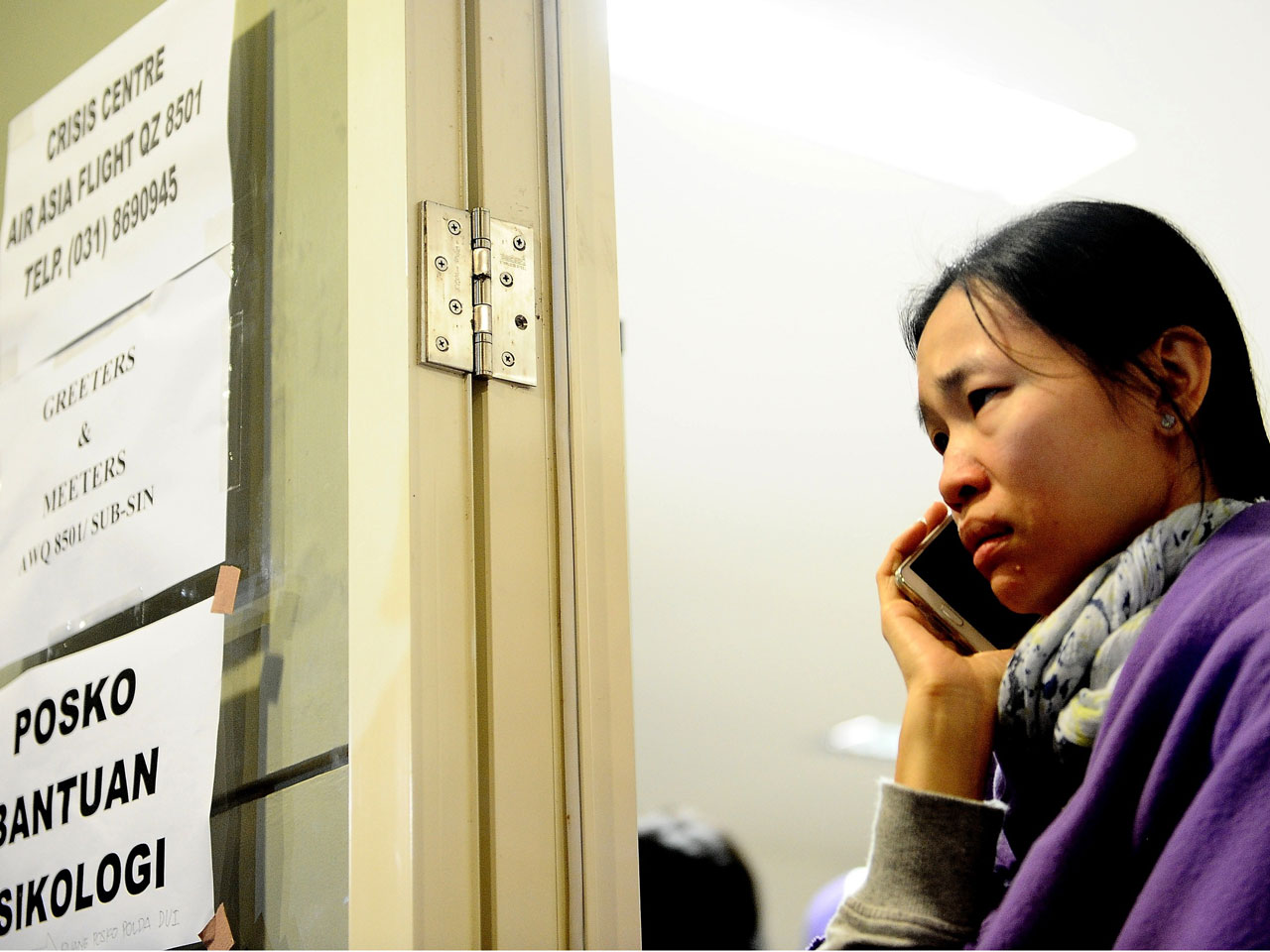 JAKARTA, Indonesia - An astonishingly tragic year for air travel in Southeast Asia turned worse Sunday when an AirAsia plane carrying 162 people disappeared over stormy Indonesian waters, with no word on its fate despite several hours of searching by air and sea.

Aircraft searching for AirAsia Flight 8501 called off the effort for the night and will resume at Monday morning, said Achmad Toha of Indonesia's search and rescue agency. Some ships were continuing the search overnight, he said.

The plane took off Sunday morning from Surabaya, Indonesia's second-largest city, and was about halfway to its destination, Singapore, when it vanished from radar.

The last communication between the pilot and air traffic control was at 6:13 a.m. (2313 GMT Saturday), when the pilot "asked to avoid clouds by turning left and going higher to 34,000 feet (10,360 meters)." It was last seen on radar at 6:16 a.m., and a minute later was no longer there, Djoko Murjatmodjo, Indonesia's acting director general of transportation, told reporters.

CBS News aviation and safety expert Capt. Chesley "Sully" Sullenberger said in an interview on CBSN that "its appropriate that these pilots requested deviation" and that not much should be read into the lack of a distress call.

"It's likely the pilots were busy with higher priority items," Sullenberger said, adding that he himself had 5,000 hours in that type of plane.

CBS News correspondent Jeff Pegues said the area where the plane went missing is much different from other missing jet searches because the ocean is shallower and the area much more heavily trafficked.

"Sources say this isn't one of those searches that will drag out," Pegues said. "Chances of finding black boxes are much better."

Appearing later on CBS' "Face the Nation," Sullenberger said it's too early to tell whether there is a rescue or recovery operation underway.

"What we do know is that the airplane by this time of course would have exhausted its fuel supply and would have reached the surface of the Earth. We don't know exactly where or in what shape," he said.

More than 12 hours later, shocked family members huddled at the Surabaya airport , awaiting any news of the jetliner.

At the Surabaya airport, passengers' relatives pored over the plane's manifest from where the Airbus A320 had taken off, crying and embracing.

Nias Adityas, a housewife from Surabaya, was overcome with grief when she found the name of her husband, Nanang Priowidodo, on the list. The 43-year-old tour agent had been taking a family of four on a trip to Singapore, Malaysia and Indonesia's Lombok island, and had been happy to get the work.

"He just told me, 'Praise God, this new year brings a lot of good fortune,'" Adityas recalled, holding her grandson tight while weeping uncontrollably. "He apologized because he could not join us for the new year celebration."

Air Asia group CEO Tony Fernandes flew to Surabaya and said at a press conference that that the focus should be on the search and the families.

"We have no idea at the moment what went wrong," said Fernandes, a Malaysian businessman who founded the regional low-cost carrier in 2001. "Let's not speculate at the moment."

It is the third major aviation incident involving Malaysia this year. In March, Malaysia Airlines Flight 370 disappeared with 239 people, and in July, a jet from the same airline was shot down over Ukraine, killing all 298 people aboard.

Dutch air crash investigators said in September Malaysia Airlines Flight 17 was likely struck by multiple "high-energy objects from outside the aircraft," which some aviation experts say is consistent with a strike by a missile.

Indonesia and Singapore launched a search and rescue operation for Flight 8501 near Belitung island in Java Sea, the area where the jetliner lost contact with ground traffic control about 42 minutes after taking off from Surabaya.

Murjatmodjo said there was no distress signal from the cockpit of the twin-engine, single-aisle plane.

"We hope we can find the location of the plane as soon as possible, and we hope that God will give us guidance to find it," he said.

"It is most possible that it has experienced an accident," he said.

AirAsia said in a statement that the plane was on the submitted flight plan route. However, it had requested a change due to weather before communication with the aircraft was lost while it was still under the control of Indonesian air traffic control.

"This is my worst nightmare," Fernandes tweeted.

Malaysia-based AirAsia, which has a presence in most of Southeast Asia and recently in India, has never lost a plane before and has a good safety track record. Flight 8501 was operated by AirAsia Indonesia, a subsidiary that is 49 percent owned by AirAsia Malaysia.

Sunardi, a weather forecaster at the Indonesia's Meteorology and Geophysics Agency, said dense storm clouds were detected up to 44,000 feet in the same area at the time the plane was reported to have lost contact.

"There could have been turbulence, lightning and vertical as well as horizontal strong winds within such clouds," said Sunardi, who like many Indonesians uses only one name.

The plane had an Indonesian captain and a French co-pilot, five cabin crew and 155 passengers, including 16 children and one infant, AirAsia Indonesia said in a statement. Among the passengers were three South Koreans, a Malaysian, a British national and his 2-year-old Singaporean daughter. The rest were Indonesians.

AirAsia said the captain has a total of 6,100 flying hours, but Fernandes later said the number is more than 20,000. The airline said the first officer has 2,275 flying hours.

Transport Minister Ignasius Jonan told reporters in Surabaya that search and rescue efforts now involved the Indonesian army, the national Search and Rescue Agency as well as Singapore and Malaysia.

The Search and Rescue Agency's operation chief, Maj. Gen. Tatang Zaenudin, said 200 rescuers had been deployed to the east side of Belitung island.

Air Force spokesman Hadi Tjahjanto said three aircraft, including a surveillance plane, were dispatched to the area. The Singapore air force and the navy also searched with two C-130 planes. The area continued to receive heavy rain as searchers looked for the lost aircraft.

Airbus said in a statement that the missing aircraft was delivered to AirAsia in October 2008, which would make it six years old. It said the plane had accumulated about 23,000 flight hours in some 13,600 flights. AirAsia said the aircraft had last undergone scheduled maintenance on Nov. 16.

AirAsia, which has dominated cheap travel in the region for years, flies short routes of just a few hours, connecting large cities of Southeast Asia. Recently it has tried to expand into long-distance flying through its sister airline AirAsia X.

Fernandes, who is the face of AirAsia and an active Twitter user, sent out an earlier tweet saying: "Thank you for all your thoughts and prays. We must stay strong." He tweeted later that he was heading to Surabaya.

Fernandes stirred controversy earlier this year after incorrectly tweeting that Malaysia Airlines Flight 370, now synonymous with one of aviation's enduring mysteries, had landed safely. The wide-bodied Boeing 777 disappeared with 239 people aboard soon after taking off from Kuala Lumpur for Beijing on March 8. It remains missing.

Another Malaysia Airlines flight, also a Boeing 777, was shot down over rebel-controlled eastern Ukraine while on a flight from Amsterdam to Kuala Lumpur on July 17. All 298 people on board were killed.

William Waldock, an expert on air crash search and rescue with Embry-Riddle Aeronautical University in Prescott, Arizona, cautioned against drawing comparisons to the disappearance of Flight 370.

"I think we have to let this play out," he said. "Hopefully, the airplane will get found, and if that happens, it will probably be in the next few hours. Until then, we have to reserve judgment."

The circumstances bode well for finding the plane since the intended flight time was less than two hours and there is a known position at which the plane disappeared, he said.

Malaysian Prime Minister Najib Razak, expressed solidarity with AirAsia. In a tweet he said: "Very sad to hear that AirAsia Indonesia QZ8501 is missing. My thoughts are with the families. Malaysia stands ready to help."

President Barack Obama, who was vacationing in Hawaii, was briefed on the plane's disappearance and officials were tracking the situation, the White House said.

The Airbus A320 is a workhorse of modern aviation. Similar to the Boeing 737, it is used to connect cities anywhere from one to five hours apart. There are currently 3,606 A320s in operation worldwide, according to Airbus. The A320 family of jets, which includes A319 and A321, has a very good safety record, with just 0.14 fatal accidents per million takeoffs, according to a safety study published by Boeing in August.

Airbus said in a statement that the aircraft used for Flight 8501 was delivered to AirAsia in October 2008, which would make it six years old. It said the plane had accumulated about 23,000 flight hours in some 13,600 flights. AirAsia said the aircraft had last undergone scheduled maintenance on Nov. 16.

Flight 8501 disappeared while it was at its cruising altitude, which is usually the safest part of a trip. Just 10 percent of fatal crashes from 2004 through 2013 occurred while a plane was in that stage of flight, according to the August Boeing safety report.

In 2007, an Indonesia-owned Adam Air flight carrying 102 people vanished during a domestic flight. Debris was found a few days later, but much of the fuselage remains on the ocean floor. In 1995, an Indonesian plane operated by Merpati Nusantara Airlines disappeared over open water while flying between islands in the archipelago nation. The 14 crew and passengers were never found.

Passing through bad weather such as severe thunderstorms could have been a factor with Flight 8501. Airbus jets are very sophisticated and are able to automatically adjust to wind shears or other weather disruptions. However, weather has played a role in past air disasters that occurred at cruise elevation, including the 2009 Air France Flight 447 crash over the Atlantic Ocean.

Another possibility is some type of catastrophic metal fatigue caused by the cycle of pressurization and depressurization associated with each takeoff and landing cycle - something that Flight 8501 would have done a lot. Still, metal fatigue is unlikely because this plane is only six years old.