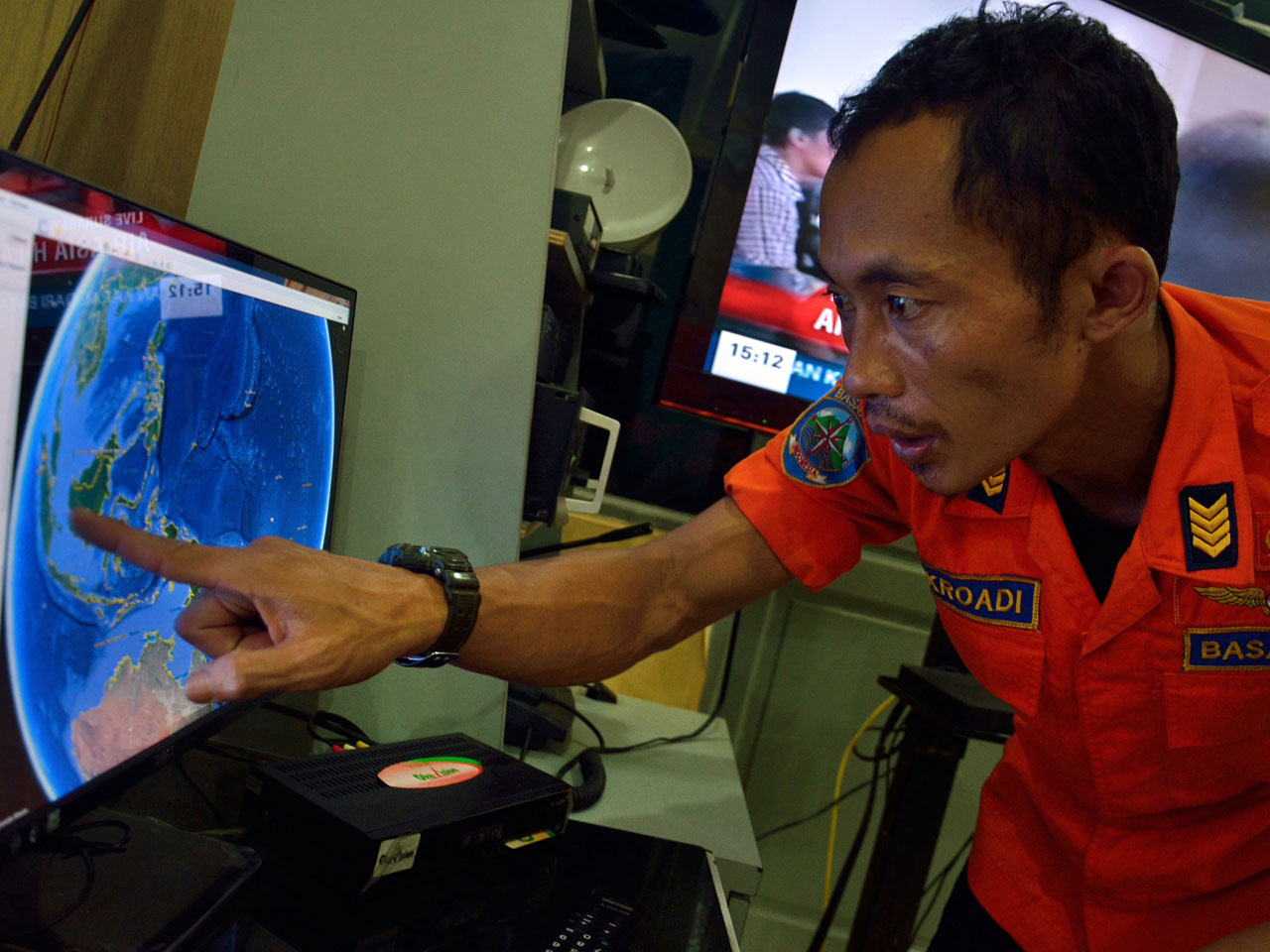 JAKARTA, Indonesia - A massive sea search was halted late local time on Sunday for an AirAsia plane that disappeared several hours earlier while flying from Indonesia to Singapore with 162 people on board through airspace possibly thick with dense storm clouds, strong winds and lightning, officials said.

More than 12 hours later, shocked family members huddled at the Surabaya airport from where the Airbus A320 had taken off, awaiting any news of the jetliner operated by an airline whose parent company is based in Malaysia. It is the third incident involving Malaysia this year following two of the worst aviation tragedies that hit Malaysia Airlines -- in March Flight 370 disappeared with 239 people and in July Flight 17 was shot down over Ukraine, killing all 298 people on it.

Indonesia and Singapore launched a search and rescue operation for Flight 8501 near Belitung island in Java Sea over which the jetliner lost contact with ground traffic control, about 42 minutes after taking off from Surabaya, Indonesia's second largest city. The flight had completed a little less than half of its journey time to Singapore.

"We hope we can find the location of the plane as soon as possible, and we hope that God will give us guidance to find it," Djoko Murjatmodjo, Indonesia's acting director general of transportation, told reporters. "We don't dare to presume what has happened except that it has lost contact."

He said there was no distress signal from the cockpit of the twin-engine, single-aisle plane.

AirAsia, a regional low-cost carrier founded in 2001 by Malaysian businessman Tony Fernandes, said in a statement that the plane was on the submitted flight plan route. However, it had requested deviation due to weather before communication with the aircraft was lost while it was still under the control of Indonesian Air Traffic Control.

Fernandes was tweeting regularly amid the search:

AirAsia, which has a presence in most of Southeast Asia and recently in India, has never lost a plane before and has a good safety track record.

Sunardi, a weather forecaster at the Indonesia's Meteorology and Geophysics Agency who uses only one name, said dense storm clouds were detected up to 44,000 feet in the same area at the time the plane was reported to have lost contact.

"There could have been turbulence, lightning and vertical as well as horizontal strong winds within such clouds," he said.

The plane had an Indonesian captain and a French co-pilot, five cabin crew and 155 passengers, including 16 children and one infant, AirAsia Indonesia said in a statement. Among the passengers were three South Koreans and one each from Singapore, Malaysia. The rest were Indonesians.

At Surabaya airport, dozens of relatives sat in a room, many of them talking on mobile phones and crying. Some looked dazed. As word spread, more and more family members were arriving at the crisis center to await word.

Transport Minister Ignasius Jonan told reporters in Surabaya that search and rescue efforts now involved the Indonesian army, the national Search and Rescue Agency as well as Singapore and Malaysia.

The Search and Rescue Agency's operation chief, Maj. Gen. Tatang Zaenudin, said 200 rescuers had been deployed to the east side of Belitung island.

Air Force spokesman Hadi Tjahjanto said three aircraft, including a surveillance plane, had been dispatched to the area. The Singapore air force and the navy also were searching with two C-130 planes.

Airbus said in a statement that the aircraft was delivered to AirAsia in October 2008, which would make it six years old. It said the plane had accumulated about 23,000 flight hours in some 13,600 flights. AirAsia said the aircraft had last undergone scheduled maintenance on Nov. 16.

Malaysia-based AirAsia, which has dominated cheap travel in the region for years, flies short routes of just a few hours, connecting large cities of Southeast Asia. However, recently it has tried to expand into long-distance flying through its sister airline AirAsia X. AirAsia Malaysia owns 49 percent of its subsidiary, AirAsia Indonesia.

Fernandes, who is the face of AirAsia and an active Twitter user, sent out a tweet saying: "Thank you for all your thoughts and prays. We must stay strong." He tweeted later that he was heading to Surabaya.

Fernandes stirred controversy earlier this year after incorrectly tweeting that Malaysia Airlines Flight 370, now synonymous with one of aviation's enduring mysteries, had landed safely. The wide-bodied Boeing 777, went missing soon after taking off from Kuala Lumpur for Beijing on March 8. It remains missing until this day with 239 people.

Four months later, on July 17, 298 passengers and crew died when Malaysia Airlines Flight 17 from Amsterdam to Kuala Lumpur crashed in Eastern Ukraine. Dutch air crash investigators said in September the plane was likely struck by multiple "high-energy objects from outside the aircraft," which some aviation experts say is consistent with a strike by a missile.

William Waldock, an expert on air crash search and rescue with Embry-Riddle Aeronautical University in Prescott, Arizona, cautioned against drawing comparisons to the disappearance of Malaysia flight 370.

"I think we have to let this play out," he said. "Hopefully, the airplane will get found, and if that happens, it will probably be in the next few hours. Until then, we have to reserve judgment."

The circumstances bode well for finding the plane since the intended flight time was less than two hours and there is a known position at which the plane disappeared, he said.

Malaysian Prime Minister Najib Razak, expressed solidarity with AirAsia. In a tweet he said: "Very sad to hear that AirAsia Indonesia QZ8501 is missing. My thoughts are with the families. Malaysia stands ready to help."

White House spokesperson Eric Schultz told CBS News that President Obama "has been briefed on AirAsia Flight 8501 and White House officials will continue to monitor the situation." The National Transportation Safety Board, which investigates aviation incidents in the U.S., also said it was monitoring developments.

The Airbus A320 is a workhorse of modern aviation. Similar to the Boeing 737, it is used to connect cities anywhere from one to five hours apart. There are currently 3,606 A320s in operation worldwide, according to Airbus. The A320 family of jets, which includes A319 and A321, has a very good safety record, with just 0.14 fatal accidents per million takeoffs, according to a safety study published by Boeing in August.

It's too early to say what might have caused a crash, but the safest part of a trip is when a plane is flying at its cruising elevation. Just 10 percent of fatal crashes from 2004 through 2013 occurred while a plane was in that stage of flight, according to the August Boeing safety report.

However, in 2007, an Indonesia-owned Adam Air flight carrying 102 people vanished during a domestic flight. Debris was found a few days later, but much of the fuselage remains on the ocean floor. In 1995, another Indonesian plane, Merpati Nusantara Airlines, also disappeared over open water while flying between islands in the archipelago nation. The 14 crew and passengers were never found.

Passing through bad weather, such as severe thunderstorms, could have been a factor. Airbus jets are very sophisticated and are able to automatically adjust to wind shears or other weather disruptions. However, weather has played a role in past air disasters that occurred at cruise elevation, including the 2009 Air France Flight 447 crash over the Atlantic Ocean.

Another possibility is some type of catastrophic metal fatigue caused by the cycle of pressurization and depressurization associated with each takeoff and landing cycle - something that flight 8501 would have done a lot. Still, metal fatigue is unlikely because this plane is only six years old.