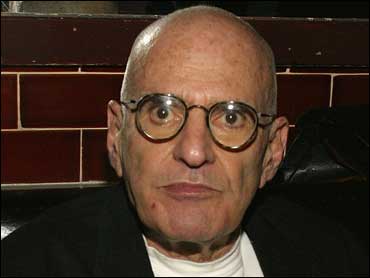 As a child, Larry Kramer says he was called a "sissy" by his father. But now, turning 71 yesterday, there are many names people call him — a writer, an activist, a playwright and a fighter.

Whether on the page or at the podium, Kramer has spent the past 25 years fighting for AIDS awareness. His play about the early years of AIDS, "The Normal Heart," has had more than 600 productions all over the world.

His 1978 novel, "Faggots," continues to be one of the best-selling of all gay novels. His advocacy group, ACT-UP, took raising AIDS awareness to a new level — including jumping in front of Dan Rather in 1991 on the CBS Evening News. Another project, the Treatment Data Fund, is designed to make treatments for the disease more accessible to patients.

But despite all his fighting, Kramer still says there's a very large battle to fight, against a very large foe: indifference.

"It breaks my heart that we went through all of this," Kramer told correspondent Harry Smith on CBS Sunday Morning. "That so many of us have died, and that we fought so hard to get the drugs out there, that are now out there, to save people and that people are still infecting themselves"

Kramer was living a quiet life in New York when the AIDS epidemic hit in 1981. News reports were calling it a "gay cancer" — and fear of the disease and the repercussions it could cause spread quickly though the gay community.

"You have no idea what it was like," Kramer said. "You could not walk down the street without running into somebody who was sick, who told you about three people who had died since the last time you saw him."

In order to help, he and a handful of friends formed the Gay Men's Health Crisis, which today is still the world's largest health provider to men with AIDS. He had to help, he says, because public officials would not speak about the disease. Indeed, then-President Reagan did not talk about AIDS until several years later. And when he did, the words were not comforting.

"Let's be honest with ourselves — AIDS information can not be what some call 'value neutral,' " Reagan said in 1987. "After all, when it comes to preventing AIDS, don't medicine and morality teach the same lessons?"

And it was then that the quiet man began to wage a very public battle.

In 1987, discontented by the response to AIDS by both the government and the gay male community, Kramer founded the AIDS Coalition to Unleash Power, or ACT-UP, an advocacy and protest group that often engaged in acts of civil disobedience to get attention. In addition to jumping in front of Rather in 1991, a demonstration in which the group disrupted mass at New York's St. Patrick's Cathedral in 1989 is another one of Kramer's proudest moments.

"Suddenly, people were afraid of us," he said. "These were not the gay people that the media was used to portraying."

Despite AIDS hitting the 25 million-death mark, the medicines that Kramer has fought for have helped millions — including Kramer himself. It was in the early 1990s that Kramer got his own HIV-positive diagnosis. But his illness only strengthened his desire to fight.

"It's hard to get up there and make an ass of yourself," Kramer said. "But, you know, you have to think of the greater good."

In 2001, Kramer underwent liver transplant surgery, the result of liver disease caused by a chronic hepatitis B infection. It was the first high-profile transplant for an HIV-infected patient in the United States. He is also the recipient of the American Academy of Arts and Letters' Award in Literature and the first openly gay person to be honored with a Public Service award from Common Cause.

"Engine Trouble": How greenhouse gases threaten our world
Thanks for reading CBS NEWS.
Create your free account or log in
for more features.
View CBS News In
CBS News App Open
Chrome Safari Continue
Be the first to know
Get browser notifications for breaking news, live events, and exclusive reporting.