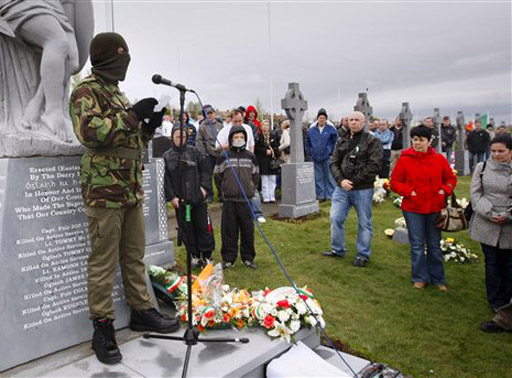 DUBLIN -- Two gunmen ambushed and killed a former top figure in the Real IRA splinter group in the southwest city of Cork, the first slaying of its kind in four years in Ireland, police and witnesses said Wednesday.

The attackers approached Aidan “The Beast” O’Driscoll from behind in the street, shot him once in the back, then twice more as the 37-year-old lay on the pavement. O’Driscoll, the Real IRA’s reputed former chief of staff, died two hours later while undergoing surgery at Cork’s hospital.

No group claimed responsibility. Police said the list of suspects was long, because O’Driscoll made many enemies in both gangland and IRA circles. Two cars believed to have been used by the attackers were abandoned in different parts of Cork and set on fire in a bid to destroy forensic evidence, a trademark IRA practice.

O’Driscoll was a close associate of Alan Ryan, the top Real IRA figure in Dublin, who launched a deadly war against rival drug-dealing gangs in the Irish capital and was shot to death in retaliation in 2012.

O’Driscoll’s slaying threatens to fuel renewed feuding among Irish Republican Army splinter groups and other gangs. While the dominant IRA faction, the Provisionals, renounced violence and officially disarmed in 2005, smaller rival groups have sought to fill the vacuum, particularly over control of criminal rackets in the Republic of Ireland.

The Real IRA in 2013 said its new leadership had demoted and expelled O’Driscoll for pilfering profits from the outlawed group’s involvement in cigarette smuggling and other crime. At the time, Real IRA colleagues shot O’Driscoll in both legs in a so-called “punishment” attack designed to cripple temporarily, not kill.

O’Driscoll was suspected of orchestrating or committing several killings in Cork and Dublin in the past decade, but never charged. He was convicted of Real IRA membership in 2006 but freed on a legal technicality two years later.

He earned his “Beast” nickname as a teenage Gaelic footballer in Cork, reflecting his brawn and bruising style of play.