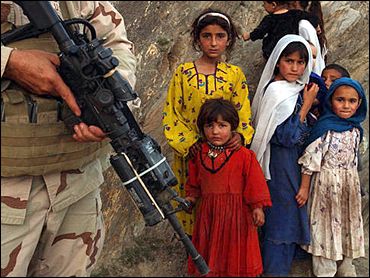 Gunmen killed two Afghans working for a German relief agency in southeastern Afghanistan, officials said Wednesday, another blow to the country's shaky security in the run-up to October elections.

A field officer and a driver for the Malteser aid group were fatally wounded in the attack Tuesday in Paktia province, said Mohammed Nader Farhad, a spokesman for the U.N.'s refugee agency.

The German group said it suspended its activities in the region.

It was not immediately clear who carried out the attack.

Civilians have been increasingly targeted in a wave of violence that has left more than 700 people dead in Afghanistan this year, including 24 aid workers killed in attacks blamed mainly on Taliban militants.

The last fatal assault on an aid group was the June 2 shooting of five members of Doctors Without Borders in the northwest. The medical relief group announced last week it was pulling out of Afghanistan.

The U.S. military warned anew that attacks on soft targets would continue in the run-up to the presidential vote set for Oct. 9, as militants turned away from punishing confrontations with American forces.

Dozens of insurgents were reportedly killed in fighting with Afghan troops and U.S. warplanes near the Pakistani border on Monday. Two Afghan soldiers also died.

Spokesman Maj. Scott Nelson said earlier Wednesday that a major attack on civilian targets in Kabul was also possible. "We're going to do everything we can to stop them, but that may happen."

The Malteser agency said Tuesday's victims were returning from work on a project in Zurmat district of Paktia, 75 miles south of Kabul, when shots were fired at their car from a passing vehicle.

One of the workers, Mohammed Idrees Sadiq, died at the scene, while the other, 19-year-old Emal Abdul Samad, died after being flown to a U.S. military hospital at Bagram, north of Kabul.

Ingo Radtke, the head of Malteser's foreign operations, said the agency was "shocked by this terrible act and very concerned about the security situation which is increasingly tense also because of the approaching elections."

The agency was working with the U.N. on vocational training programs and other projects for former refugees in Paktia and shared an office with the world body, Farhad said.

The agency, which has been working in Afghanistan since 2002, said it currently has 20 international and 250 local employees in the country, working in seven provinces.
By Stephen Graham