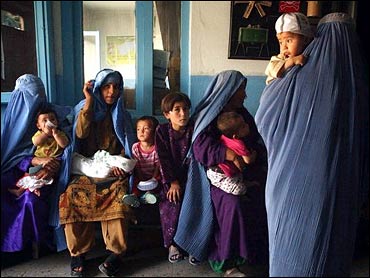 Medical relief agency Medecins Sans Frontieres on Wednesday announced that it will withdraw from Afghanistan because of the killing of five of its staff and the danger of further attacks.

The group, known as Doctors Without Borders in English, said it was pulling out also because it was unhappy with a government investigation into the June 2 deaths and with the "co-optation of humanitarian aid" by the U.S. military.

"Today's context is rendering independent humanitarian aid for the Afghan people all but impossible," it said in a statement.

It is unclear when the about 80 international volunteers and 1,400 Afghan staff who worked for the agency in Afghanistan before the attack will cease their activities. Many operations were already suspended after the June incident.

The pullout is the most dramatic example yet of how deteriorating security is hampering the delivery of badly needed aid and reconstruction.

Taliban insurgents are blamed for a stream of deadly attacks on aid workers that have made much of the south and east virtually off-limits. The attack on the agency's workers in northwestern Badghis, the deadliest ever on an international relief agency here, raised fears that the relatively tranquil north was also becoming too dangerous.

Police arrested ten people over the killings, including two prime suspects, but have said it was unclear if they were linked to militant groups or the feuding factions who control much of the north of the country.

The Taliban claimed responsibility for the attack.

MSF said the Afghan government had failed to conduct a "credible investigation."

It also complained about the use by U.S.-led forces of humanitarian aid "for political and military motives."

The American military has set up a string of so-called Provincial Reconstruction Teams across the country. Soldiers are providing basic health services, digging wells and doing other work normally carried out by civilians.

A spokesman for MSF declined to elaborate, saying the group planned to explain its decision at a briefing in Kabul on Thursday.