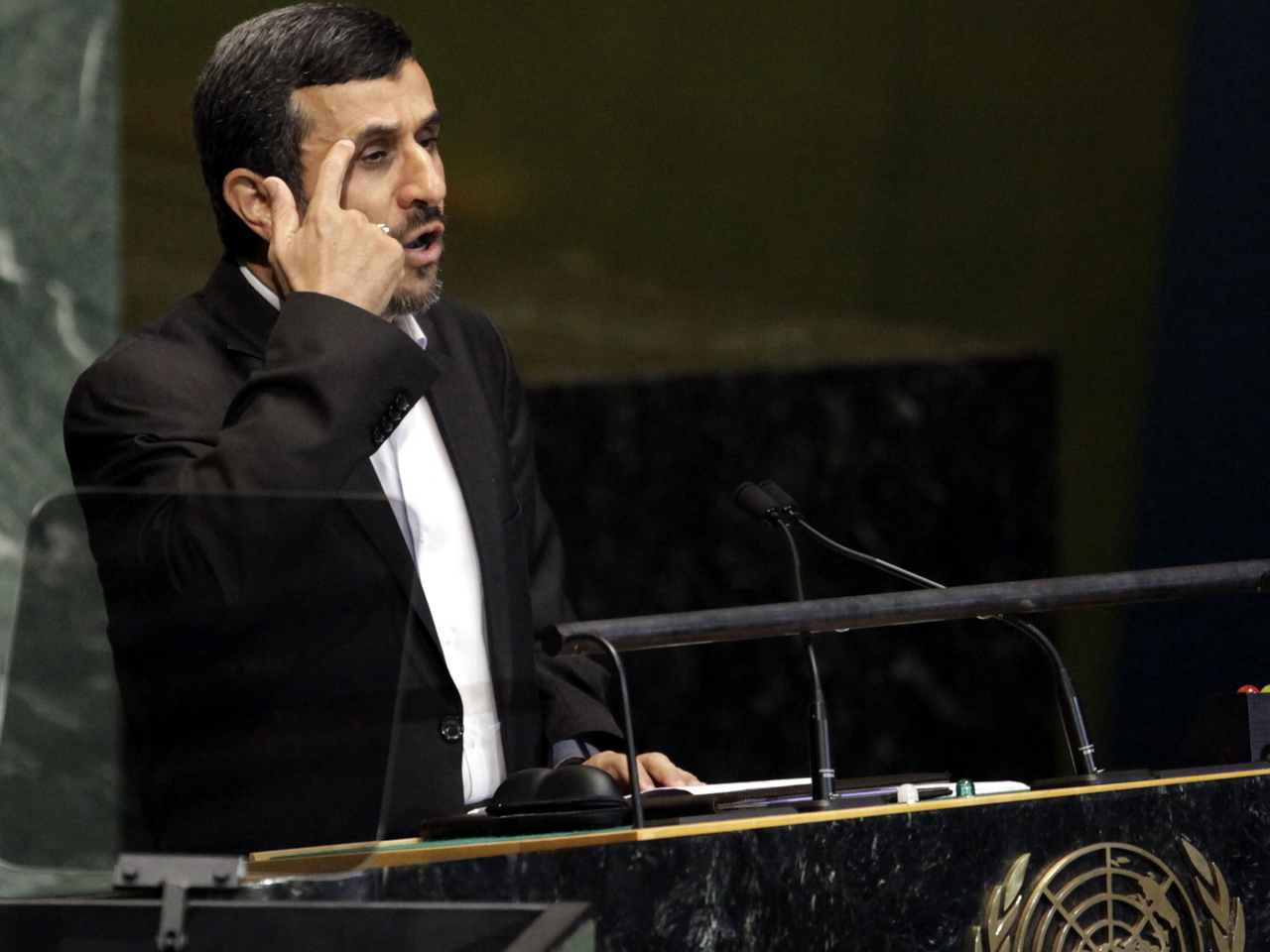 (CBS/AP) Iranian President Mahmoud Ahmadinejad delivered a rambling but relatively toned-down speech at the United Nations Wednesday in which he called the Sept. 11 terror attacks "tragic" but also said that humanity's lives would be "beautiful and pleasant" had U.S. forces not thrown Osama bin Laden's corpse into the sea.

Ahmadinejad, who in 2010 called the 9/11 attacks "a big lie," criticized the United States for "killing and throwing the culprit into the sea without trial or without informing the world and the people of America." He told the annual gathering of the U.N. General Assembly that the U.S. should have formed "an independent fact-finding team" to "make the general public aware of the truth behind the incident."

The U.S. delegation did not attend Ahmadinejad's speech, delivered amid tensions over Iran's nuclear program, which Tehran insists is for peaceful purposes and the United States, Israel and Western nations claim is a cover for building a weapon.

Known for past fiery denunciations of the United States and Israel, which he refers to as "Zionists," Ahmadinejad cited what he termed the "continued threat by the uncivilized Zionists to resort to military action against our great nation."

He appeared to make reference to Israel's threats to strike Iran when he said, "No one feels secure or safe, even those who have stockpiled thousands of atomic bombs and other arms in their arsenals." He did not reference Iran's nuclear program.

Yet at times Ahmadinejad also seemed to strike a conciliatory tone.

"I do not believe that Muslims, Christians, Jews, Hindus, Buddhists and others have any problems among themselves or are hostile against each other," Ahmadinejad said.

Ahmadinejad: "We have never threatened" Israel
Ahmadinejad on Assad aid: "They don't need us"
Iran overshadows Palestinian issue at U.N.

In an interview broadcast on "CBS This Morning" Wednesday, Ahmadinejad walked back from one of his previous inflammatory comments, that Israel should be "wiped off" the map.

"We have never threatened them," Ahmadinejad told CBS News.

"I don't think 50,000 forces would even fit in Syria," Ahmadinejad told CBS News.

Instead, he said that Iran supports both the Assad regime and the opposition: "Certainly both parties are our friends. They are both people Syria. We love both parties."

During his U.N. address, Ahmadinejad at times struck a populist tone and said the U.S. and European governments don't hear the voices of those who "constitute 99 percent of the societies."

"Are we to believe that those who spend hundreds of millions of dollars on election campaigns have the interests of the people of the world at their hearts?" Ahmadinejad asked.

His lone reference to the U.S. presidential election came during a part of his speech in which he was making the case for a "new world order" and disparaging the "current world order" for being "constructed on materialism and is no way bound to moral values."

"Despite what big political parties claim in the capitalist countries, the money that goes into election campaigns is usually nothing but an investment," Ahmadinejad said.

Ahmadinejad's reputation prompted officials to urge him to take a less provocative tone in his speech. On Sunday, U.N. Secretary-General Ban Ki-moon had met with Ahmadinejad and raised the potentially harmful consequences of inflammatory rhetoric "from various countries in the Middle East," U.N. spokesman Martin Nesirky said.

But on Monday, Ahmadinejad took aim at both the U.S. and Israel while addressing a high-level U.N. meeting promoting the rule of law, accusing Washington of shielding what he called a nuclear-armed "fake regime." His remarks prompted a walkout by Israel's U.N. Ambassador Ron Prosor.

Ahmadinejad spoke Wednesday on Yom Kippur, the Jewish Day of Atonement and the holiest day on the religion's calendar. His appearance at the world body on the holy day irritated many Jewish New Yorkers, CBS New York station WCBS-TV reports.