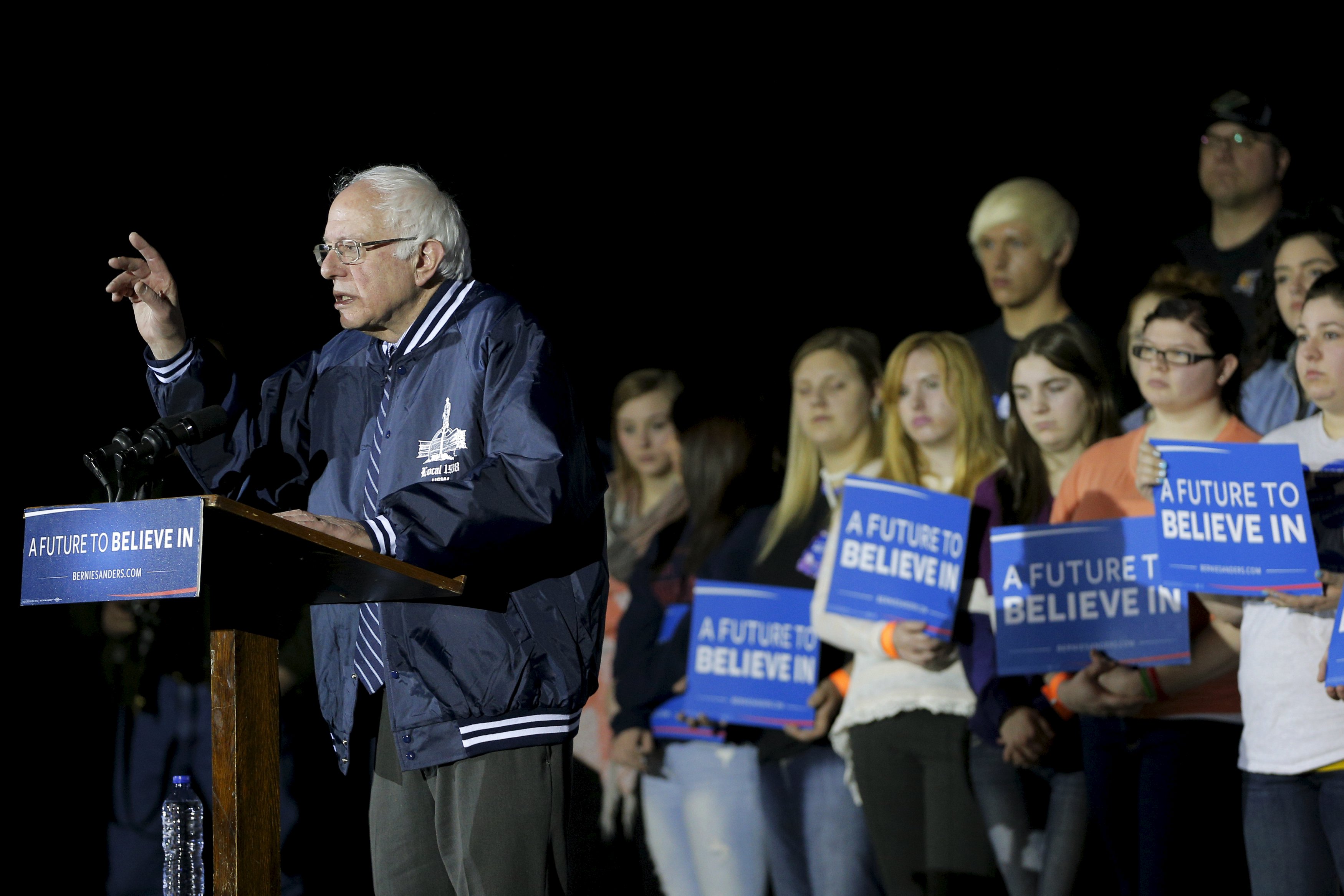 Bernie Sanders took to the Hibbing High School stage in Minnesota donning a new coat: an oversized blue and white sports-style jacket with thick white stripes around the neck and sleeves. It read "Local 1938 USW." It had been given to him from the local United Steelworkers of America chapter in a private meeting before the rally.

"Me, unions and workers are not just, you know, I don't go to Wall Street in the morning and talk to unions in the afternoon. This is my life. This is what I do. I have been on more picket lines than I can count," Sanders said to the 25 steelworkers, many of whom had been recently laid off, in a veiled attack on Hillary Clinton. He also told them that he has opposed trade deals from day one. But Sanders did not really lay into his opponent until he got to the big stage.

Sanders said "the middle class of this country is disappearing" and cited "disastrous trade policies" as one reason for that. He then contrasted his opposition to the NAFTA and TPP trade deals to Clinton who, he said, only opposed TPP after unions forced her to.

Sanders' attacks on Clinton have ebbed and flowed this week on the campaign trail. He previewed this plan on Monday at a press conference in Boston.

"What I intend to do over the next number of weeks is kind of contrast my record to Secretary Clinton's," Sanders said at Boston's International Association of Ironworkers, Local 7.

He said he would go after her on trade and her super PACs -- and he started off in doing just that.

"I do not receive many millions of dollars from Wall Street or the pharmaceutical industry or other powerful, wealthy interests in this country and have not given speeches for hundreds of thousands of dollars to Wall Street," Sanders said in Chicago on Thursday night, referring to money Clinton received between stepping down as secretary of state and launching her presidential bid.

Later in the week, Sanders broadened his attacks - hitting Clinton on a wide range of topics: her vote for the Iraq war, her support of NAFTA, her opposition to the Defense of Marriage Act in 1996, her support of the 1996 welfare reform bill that created what Sanders called "extreme poverty," her ties to super PACs and her support of the death penalty.

The crowd has welcomed the attacks. Boos roared through the Chicago arena when Sanders spoke about the Iraq war: "I voted against the war," he said bluntly.

Earlier in the week, even in the places where Sanders did not hit Clinton by name, the anti-Clinton sentiment was alive: "Hillary, Hillary," Virginians chanted as Sanders touched on money on Tuesday.

But money in politics is not the only topic that fuels the anti-Clinton fervor.

Natalie Minor, a mother of two and a Sanders supporter at the Kansas City rally, put it this way:

"I am not a hateful, like, type person, but she, she is like a snake, like Medusa. You know? Because, for one, she sent all those emails, you know, to put our country in jeopardy. It was all those top-secret information that should not have been leaked out," Minor said.

She added that she "hates" Clinton because she is a supporter of Monsanto, which produces genetically modified organisms.

She thinks that Sanders should be talking about Clinton on the trail.

Yet Sanders wishes he had time to spend in the small, intimate discussions on the campaign trail.

"I always wish I had more time. I love to visit," Sanders told a group of Native Americans in Minnesota, where they talked extensively about the drug problem in their community.

"This is a problem in my state," Sanders said. "... There are a lot of these pills running around. Kids getting the pills. Tell me if I am right on this?"

They said yes and told him that heroin is cheaper.

Sanders also learned something new in his meeting with the steelworkers in Minnesota: Due to Chinese production of steel that is being imported to the U.S., many American steelworkers are losing their jobs.

"What is the quality of China's steel?" Sanders asked. They told him it's not very good.

Cathy Drummond, a staff representative for the USW, told him that 2,000 miners have been laid off since 2015.

"It is a huge impact to us, so we appreciate you coming and talking to us," Drummond said.

Sanders said he would not make any promises, but he did note that he would work hard for them if he gets to the White House.

"If elected president, I think that you will find that you have the strongest pro-labor president in the modern history of America in the White House," Sanders said.

Then the group took a photo with Sanders before he hit the stage for he rally - in their jacket.