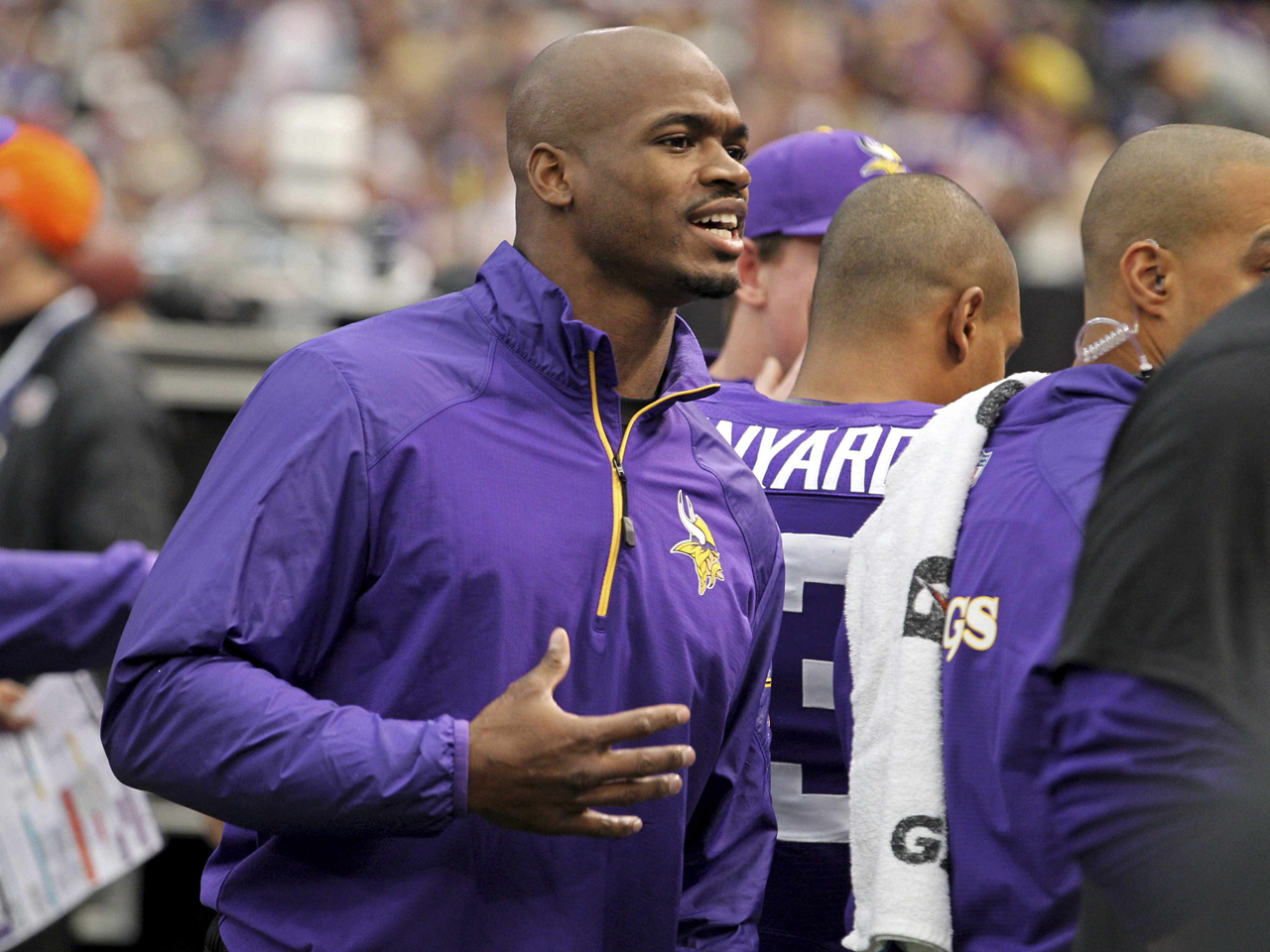 MINNEAPOLIS -- Minnesota Vikings running back Adrian Peterson was booked and released from a Texas jail on a child abuse charge early Saturday, capping a tumultuous week for the NFL, which was already facing heavy criticism for its handling of a domestic violence case involving another star player.

Nick Wright, host of CBS sports radio station 610 in Houston and one of the first reporters to break the Peterson story, said that he's read an account of what Peterson's 4-year-old son told police and described his story as "a heartbreaking story" on "CBS This Morning: Saturday."

"He mentions his reluctance to want to talk to police because 'Daddy Peterson might hit me,'" said Wright. "He references being hit in the face."

Wright also said that, according to the mother's statement to police, the boy told her that "Daddy has a whooping room."

"The child's story is truly, truly troubling, disturbing. I mean, sad is the best way I can put it," Wright said.

Peterson was processed at the Montgomery County jail and released on $15,000 bond, according to a sheriff's office spokesman, Lt. Brady Fitzgerald. He is charged with causing injury to a child age 14 or younger, allegedly by spanking one of his sons with a wooden switch, or tree branch, on or around May 18.

The Montgomery County prosecutor's office said Saturday that Peterson would have a court appearance sometime in the next two weeks.

The star running back won't play Sunday in Minnesota's home opener against New England. Shortly after the news of the indictment broke Friday, the Vikings announced that Peterson had been benched for the game against the Patriots.

Brian McCarthy, a spokesman for the league, said Saturday that Peterson's case "will be reviewed under the NFL's personal conduct policy."

It wasn't immediately clear if Peterson remained in Texas after leaving the jail or if he returned to Minnesota. There was no activity outside of his home near Houston and a man who answered the door at his home near Minneapolis said Peterson wasn't there.

Peterson's attorney, Rusty Hardin, said Friday that his client "has never hidden from what happened" in the case.

"Adrian is a loving father who used his judgment as a parent to discipline his son. He used the same kind of discipline with his child that he experienced as a child growing up in East Texas," Hardin said.

He said Peterson cooperated fully with the investigation, voluntarily testifying before a grand jury for several hours.

"Adrian will address the charges with the same respect and responsiveness he has brought to this inquiry from its beginning. It is important to remember that Adrian never intended to harm his son and deeply regrets the unintentional injury," Hardin said.

Peterson's arrest came with the NFL facing criticism for its handling of a domestic violence case involving former Baltimore Ravens running back Ray Rice. Now the league has another public relations problem with the charge of child abuse against an even bigger star in Peterson.

Commissioner Roger Goodell announced tougher penalties last month for players accused of domestic violence: six weeks for a first offense and at least a year for a second violation.

His memo to all 32 teams, following criticism over handling of a case against Rice, also said more severe discipline will be imposed "if there are aggravating circumstances such as the presence or use of a weapon, choking, repeated striking, or when the act is committed against a pregnant woman or in the presence of a child."

Whether the charge against Peterson, if convicted, would fall under that umbrella was not clear.

A man who identified himself as Peterson's uncle, Chris Peterson, answered the door Saturday at the running back's house in Eden Prairie, Minnesota, near Vikings headquarters. He said Peterson was not there and declined to say where he was, but he said Peterson would release a statement "when he's ready."

The stunning sequence of events reignited a debate about corporal punishment but also added fuel to a fire burning hot since Rice first received a two-game suspension for hitting his then-fiancee.

Goodell acknowledged he "didn't get it right" and an investigation headed by former FBI director Robert Mueller was convened after a longer version of a security video surfaced revealing Rice's punch to the face of his now-wife in a casino elevator that knocked her out cold. The Ravens released Rice after the longer video surfaced.

The league has also come under scrutiny in the cases of Carolina Panthers defensive end Greg Hardy and San Francisco 49ers defensive tackle Ray McDonald, both still playing with domestic abuse cases pending. Hardy was convicted July 15 of assaulting a woman and communicating threats, but he is appealing. San Jose police have been continuing to actively investigate an Aug. 31 incident involving McDonald.

The charge of child abuse was especially jarring, given the tragedy that unfolded around Peterson last season.

Not long after finding out that he had a 2-year-old son living in South Dakota, Peterson rushed to a hospital there after police said the boy was brutally beaten by his mother's boyfriend. The boy died, and a 28-year-old man is scheduled for trial next month on second-degree murder charges.

Widely considered the best running back in the league, Peterson has rushed for 10,190 yards and 86 touchdowns in his eight-year career including a 2,097-yard season in 2012 that fell 9 yards short of the all-time record.

Peterson did not practice Thursday because of what coach Mike Zimmer called a "veteran day," allowing experienced players to rest, but Peterson was at the team facility and spoke to reporters that day about facing the Patriots. Matt Asiata is Peterson's backup.

Peterson returned to practice Friday and was in the locker room following the workout with the rest of his teammates for lunch. Shortly thereafter, Peterson posted a message on his Twitter account that said in part: "It's your season! Weapons may form but won't prosper! God has you covered don't stress or worry!"

Hardin, his defense attorney, is a familiar name in sports circles. He successfully defended Roger Clemens in his recent perjury trial over the alleged use of performance-enhancing drugs and two years ago represented Los Angeles Lakers forward Jordan Hill, who was sentenced to one year of probation after pleading no contest to assaulting his former girlfriend.

He has worked with Peterson before, too: In 2012, he said Peterson was the victim after the player was charged with misdemeanor resisting arrest following an incident at a Houston nightclub. A grand jury dismissed the charge after finding no probable cause for prosecutors to continue.