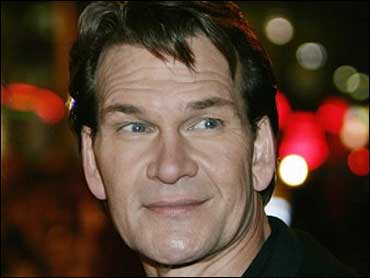 Patrick Swayze, the hunky actor who danced his way into viewers' hearts with "Dirty Dancing" and then broke them with "Ghost," died Monday after a battle with pancreatic cancer. He was 57.

"Patrick Swayze passed away peacefully today with family at his side after facing the challenges of his illness for the last 20 months," said a statement released Monday evening by his publicist, Annett Wolf. No other details were given.

Fans of the actor were saddened to learn in March 2008 that Swayze was suffering from a particularly deadly form of cancer.

He had kept working despite the diagnosis, putting together a memoir with his wife and shooting "The Beast," an A&E drama series for which he had already made the pilot. It drew a respectable 1.3 million viewers when the 13 episodes ran on the cable television station in 2009, but A&E said it had reluctantly decided not to renew it for a second season.

Swayze said he opted not to use painkilling drugs while making "The Beast" because they would have taken the edge off his performance. He acknowledged that time might be running out given the grim nature of the disease.

When he first went public with the illness, some reports gave him only weeks to live, but his doctor said his situation was "considerably more optimistic" than that.

"I'd say five years is pretty wishful thinking," Swayze told ABC's Barbara Walters in early 2009. "Two years seems likely if you're going to believe statistics. I want to last until they find a cure, which means I'd better get a fire under it."

Swayze fought the disease publicly. Last year he appeared in a Stand Up to Cancer telethon, reports CBS Radio's Steve Futterman. In the last few months he condition began to worsen and it was clear the end was near. Swayze smoked cigarettes much of his life and said he felt smoking probably had something to do with his illness, Futterman reports.

A three-time Golden Globe nominee, Swayze became a star with his performance as the misunderstood bad-boy Johnny Castle in "Dirty Dancing." As the son of a choreographer who began his career in musical theater, he seemed a natural to play the role.

A coming-of-age romance starring Jennifer Grey as an idealistic young woman on vacation with her family and Swayze as the Catskills resort's sexy (and much older) dance instructor, the film made great use of both his grace on his feet and his muscular physique.

It became an international phenomenon in the summer of 1987, spawning albums, an Oscar-winning hit song in "(I've Had) the Time of My Life," stage productions and a sequel, 2004's "Dirty Dancing: Havana Nights," in which he made a cameo.

Swayze performed and co-wrote a song on the soundtrack, the ballad "She's Like the Wind," inspired by his wife, Lisa Niemi. The film also gave him the chance to utter the now-classic line, "Nobody puts Baby in a corner."

And it allowed him to poke fun at himself on a "Saturday Night Live" episode, in which he played a would-be Chippendales exotic dancer alongside the corpulent - and frighteningly shirtless - Chris Farley.

A major crowdpleaser, "Dirty Dancing" drew only mixed reviews from critics, though Vincent Canby wrote in The New York Times, "Given the limitations of his role, that of a poor but handsome sex-object abused by the rich women at Kellerman's Mountain House, Mr. Swayze is also good. ... He's at his best - as is the movie - when he's dancing."

Swayze followed that up with the 1989 action film "Road House," in which he played a bouncer at a rowdy bar. But it was his performance in 1990's "Ghost" that showed his vulnerable, sensitive side. He starred as a murdered man trying to communicate with his fiancee (Demi Moore) - with great frustration and longing - through a psychic played by Whoopi Goldberg.

Swayze said at the time that he fought for the role of Sam Wheat (director Jerry Zucker wanted Kevin Kline) but once he went in for an audition and read six scenes, he got it.

Why did he want the part so badly? "It made me cry four or five times," he said of Bruce Joel Rubin's Oscar-winning script in an AP interview.

"Ghost" provided yet another indelible musical moment: Swayze and Moore sensually molding pottery together to the strains of the Righteous Brothers' "Unchained Melody." It also earned a best-picture nomination and a supporting-actress Oscar for Goldberg, who said she wouldn't have won if it weren't for Swayze.

"When I won my Academy Award, the only person I really thanked was Patrick," Goldberg said in March 2008 on the ABC daytime talk show "The View."

Swayze himself earned three Golden Globe nominations, for "Dirty Dancing," "Ghost" and 1995's "To Wong Foo, Thanks for Everything! Julie Newmar," which further allowed him to toy with his masculine image. The role called for him to play a drag queen on a cross-country road trip alongside Wesley Snipes and John Leguizamo.

His heartthrob status almost kept him from being considered for the role of Vida Boheme.

"I couldn't get seen on it because everyone viewed me as terminally heterosexually masculine-macho," he told the AP then. But he transformed himself so completely that when his screen test was sent to Steven Spielberg, whose Amblin pictures produced "To Wong Foo," Spielberg didn't recognize him.

Other '80s films included "Red Dawn," "Grandview U.S.A." (for which he also provided choreography) and "Youngblood," once more with Lowe, as Canadian hockey teammates.

In the '90s, he made such eclectic films as "Point Break" (1991), in which he played the leader of a band of bank-robbing surfers, and the family Western "Tall Tale" (1995), in which he starred as Pecos Bill. He appeared on the cover of People magazine as its "Sexiest Man Alive" in 1991, but his career tapered off toward the end of the 1990s, when he also had stay in rehab for alcohol abuse. In 2001, he appeared in the cult favorite "Donnie Darko," and in 2003 he returned to the New York stage with "Chicago"; 2006 found him in the musical "Guys and Dolls" in London.

Swayze was born in 1952 in Houston, the son of Jesse Swayze and choreographer Patsy Swayze, whose films include "Urban Cowboy."

He played football but also was drawn to dance and theater, performing with the Feld, Joffrey and Harkness Ballets and appearing on Broadway as Danny Zuko in "Grease." But he turned to acting in 1978 after a series of injuries.

Within a couple years of moving to Los Angeles, he made his debut in the roller-disco movie "Skatetown, U.S.A." The eclectic cast included Scott Baio, Flip Wilson, Maureen McCormack and Billy Barty.

Swayze had a couple of movies in the works when his diagnosis was announced, including the drama "Powder Blue," starring Jessica Biel, Forest Whitaker and his younger brother, Don, which was scheduled for release this year.

Off-screen, he was an avid conservationist who was moved by his time in Africa to shine a light on "man's greed and absolute unwillingness to operate according to Mother Nature's laws," he told the AP in 2004.

Swayze was married since 1975 to Niemi, a fellow dancer who took lessons with his mother; they met when he was 19 and she was 15. A licensed pilot, Niemi would fly her husband from Los Angeles to Northern California for treatment at Stanford University Medical Center, People magazine reported in a cover story.