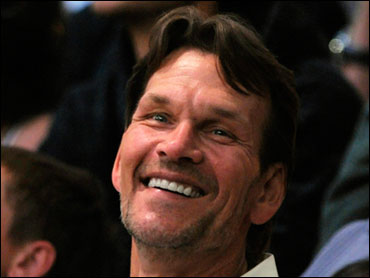 Celebrities and fans inspired by Patrick Swayze's struggle with pancreatic cancer are expressing their condolences upon his death.

Swayze, known for such hit films as "Dirty Dancing" and "Ghost" succumbed to his illness yesterday in Los Angeles at the age of 57.

"Patrick was a rare and beautiful combination of raw masculinity and amazing grace, gorgeous and strong, he was a real cowboy with a tender heart," Jennifer Grey, Swayze's co-star in "Dirty Dancing," told "Entertainment Tonight."

C. Thomas Howell, who co-starred with Swayze in "The Outsiders," "Grandview U.S.A." and "Red Dawn" says he's always had a special place in his heart for Patrick. Howell says "it was our passion for horses that forged a friendship between us that I treasure to this day."

Demi Moore, who played Swayze's fiancee in "Ghost," writes: "Patrick you are loved by so many and your light will forever shine in all of our lives."

"It solidified him as a star," Bradley Jacobs of US Weekly magazine said of Swayze's role in "Ghost." Jacobs told CBS' "The Early Show" Tuesday that Swayze was not initially considered for a part in the film, but was so moved by the script that he auditioned six times until he received the starring role.

Larry King wrote of the late actor: "Patrick Swayze was a wonderful actor & a terrific guy. He put his heart in everything. He was an extraordinary fighter in his battle w Cancer." King adds that he'll do a tribute to Swayze on his CNN program tonight.

Swayze was married since 1975 to Lisa Niemi, a fellow dancer who took lessons with Swayze's mother, a choreographer; they met when he was 19 and she was 15.